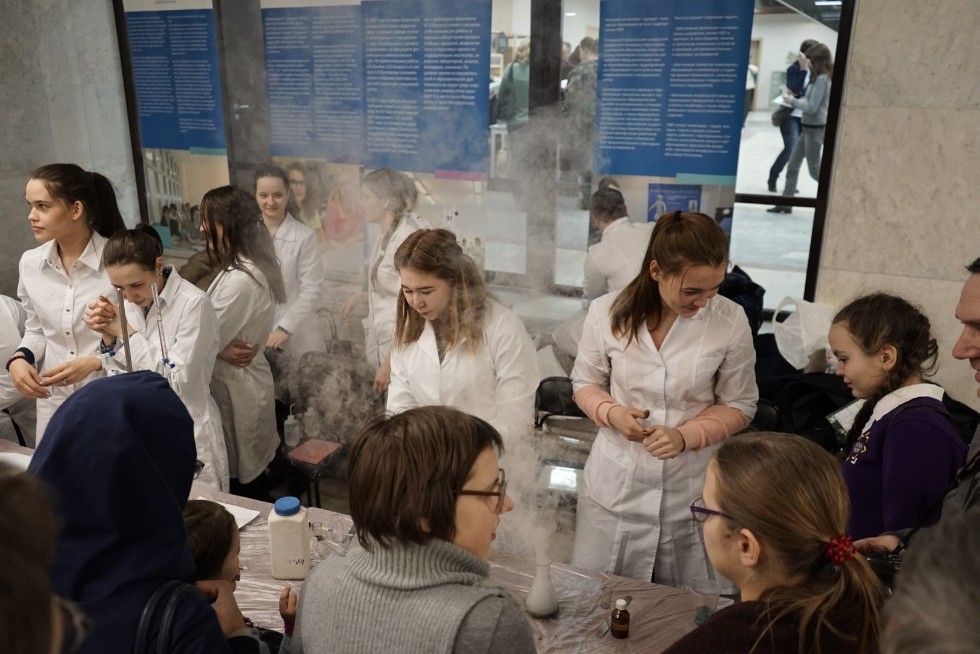 The event, appropriately titled EcoNight, attracted 1,500 people on the eve of 2nd March.

PRO Science is a series of popular science events that started in June 2016. Such ‘science nights’ include various edutainment for all ages, such as experiment shows, lectures, exhibitions, trivia competitions, and art performances.

Irina Vlasova, Media Coordinator of the Zero Waste campaign by Greenpeace Russia, talked about the organization’s efforts to remove plastic bags from retail outlets. Russia alone produces 25 billion discarded plastic bags each year, which becomes an environmental disaster. Our country still hasn’t dealt with this issue on a legislative level, so environmentalists work on this problem on a case-by-case basis. One of the biggest grocery store chains in Tatarstan has already cancelled giving out free plastic bags on checkout, and others are on the way.

Vladislav Ketov, renowned bicycle traveler, attracted much attention. He has been cycling around the world for the last 21 years. Mr. Ketov was the first to develop a real round-the-world trip along shorelines. He was also the first to autonomously ride through Europe, Africa, South and Southeast Asia, both Americas, amassing 169 thousand kilometers of trips across 96 countries, 7 deserts, 8 war zones – and all this on his bicycle.

Alina Koljovska, Head of the Center for Resource Saving, gave a game class for schoolkids. She uses little games to convey important environmental messages. In her comment for us, she said she was pleasantly surprised by the number of activities at the PRO Science.

All the guests could also partake in those activities, including on-site experiments, trivia games, microscope observations, and see stuffed animals and insects from the Zoological Museum. The Institute of Environmental Sciences let everyone measure nitrates in everyday food products. Associate Professor Albina Valeeva explained, “We have bought cucumbers, cheap and expensive apples, carrots, and various kids’ juices from local stores. Of all the food, only cucumbers showed levels of nitrates that were above the regulation. And cheap juices showed lower levels than expensive ones.”

On the other table, the guests could analyze contents of different types of water – distilled, tap, and mineral – for calcium, chlorides, and hardness levels. Postgraduate student Gulnaz Sadykova said, “We have concluded that it’s better to drink mineral water. Distilled water is not recommended for regular use because it takes away many beneficial elements with it. Tap water has lower or higher than normal levels of different compounds. It’s also quite hard, especially in some districts of the city.”

Popular author, Associate Professor Arkady Kuramshin presented a lecture with a tongue-in-cheek title ’50 Shades of Food Coloring.’ He commented, “My intent was not only to attract the public with this title. The move to natural food colorants in the European Union was made mandatory, which at that time came as a complete surprise for the industry. There were loads of unexpected obstacles. So they sort of felt themselves like the protagonist of the 50 Shades trilogy.” Most of the changes in this industry are mostly aimed at marketing noise, he opined, and advised to not be afraid of any compounds that you may encounter on food labels. The only thing that you should be wary of is something with no label at all – it probably hasn’t been subjected to any tests whatsoever.

One of the attendants of EcoNight, fourth-grader Bulat Gilyazev, told us that arrived on advice from his mom. He managed to partake in several events and even receive some certificates. “I like it here because everything is very interesting,” said Bulat and shared that his dream is to become an airport director. He has been at KFU before at science contests, so with appropriate effort his wish may come true in the future.