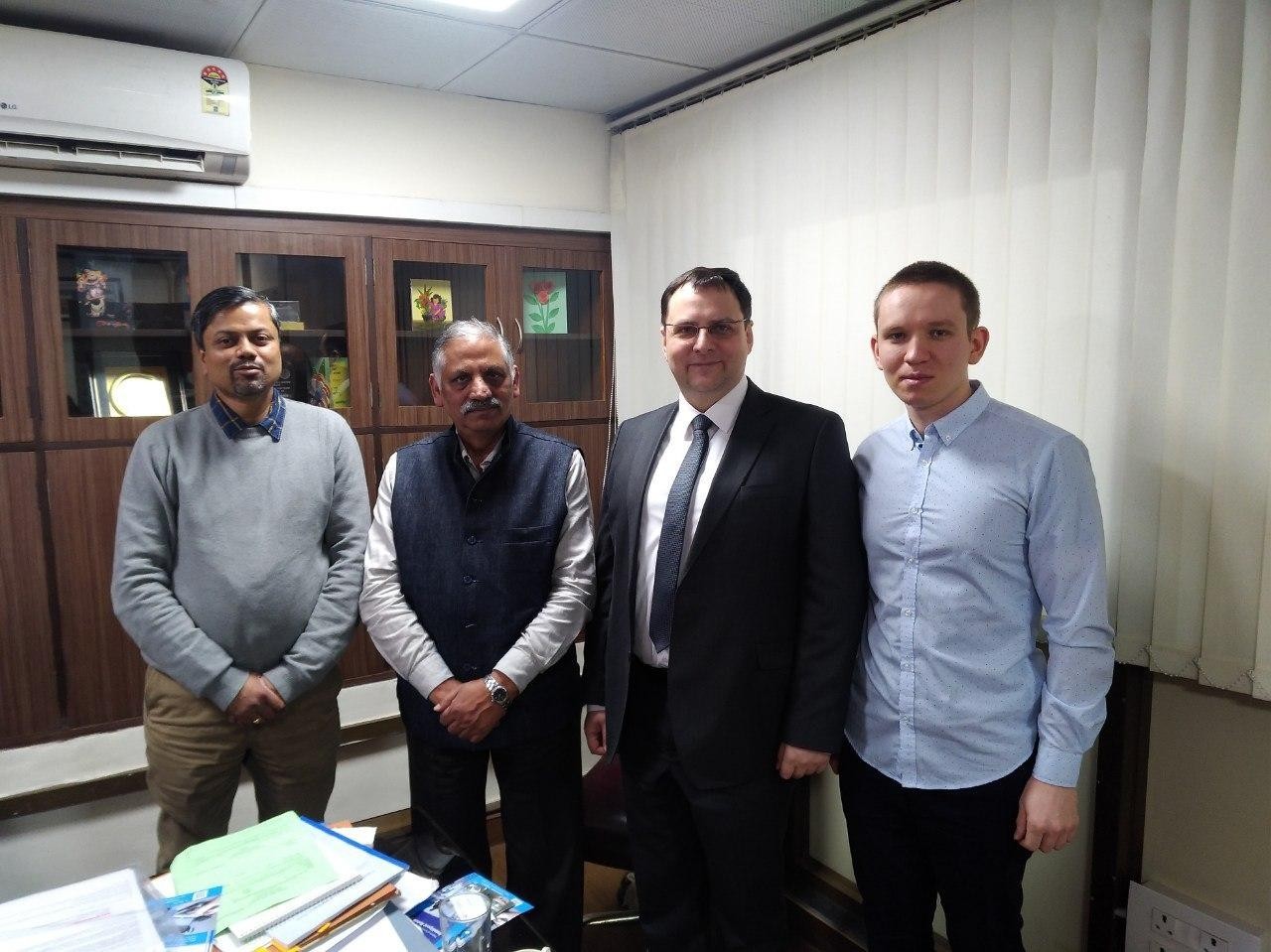 From January 30 to February 10, the LIRS team held a number of working meetings with representatives of Indian universities in the framework of fulfilling the tasks of bilateral scientific cooperation and the admission campaign 2020-2021.

On January 30, the head of the Laboratory of Intelligent and Robotic Systems (LIRS) of the Higher Institute of ITIS KFU Evgeni Magid and LIRS employee Ramil Safin met with the Decan of the Indian Institute of Technology Delhi (IITD) for educational activities, Professor Shantan Roy and Professor Bhim Singh. LIRS presented to Indian colleagues the bachelor's and master's programs of the Higher Institute of ITIS and discussed the possibilities of academic cooperation, the launch of a double diploma program and student internships in the field of robotics and computer sciences. Then Ramil Safin and Professor Magid visited the Department of Mechanical Engineering of the Indian Institute of Technology Delhi, which is headed by Professor Subir Kuma Saha. In the laboratory of Professor K.S. Sakha, they got acquainted with projects on technical vision, mobile and industrial robotics, automation of heterogeneous production lines and nuclear stations.

On January 31, Ramil Safin and Professor Magid visited the laboratories of the Rural Technology Action Group (RuTAG) and UAV. RuTAG laboratory employees presented a number of projects aimed at mechanizing small farms and crafts, including the design, development and production of mechanisms for extracting water from wells and measuring water levels, for cutting pet hair, for the manufacture of wood and glass jewelry, and others. Despite the fact that analogues of most of the mechanisms created by RuTAG have existed in developed countries for a long time, the main goal of the developers is to reduce the cost and, accordingly, the cost of such products for users, so that they can then be introduced everywhere in rural areas and thus improve the quality of life of rural population, for example, the final cost of a mechanism for extracting water from wells costs less than 10 thousand rubles. In the Professor's Shubhendu VhasinUAV laboratory, LIRS employees saw swarm collaboration projects of small UAVs using the OptiTrack capture system. It should be noted that laboratory has not only an interesting and promising substantial part of the projects, but also expensive equipment.

On January 31, Professor Magid made a presentation to the staff and students of the Department of Mechanical Engineering with a presentation on the research and educational activities of LIRS. Then a working meeting was held on the joint research project "Autonomous calibration of robot cameras using on-body markers" by the groups of professors K.S. Sakh and Professor Magid, at which Ramil Safin gave a presentation on the results of the first and second years of work on the project. The project has been ongoing since 2018 with the support of the Russian Federal Property Fund. As part of the project, were prepared  3 joint publications which have been indexed in the Web of Science and Scopus databases.

On February 10, was held the second meeting of the project “Autonomous calibration of robot cameras using on-body markers” members of the Indian research team of the project, Prof. Sumantra Datta Roy and Chetan Arora, as well as researcher Shantam Shorevala gave their presentations. Then there was a discussion of further project plans and the content of new joint Indian-Russian grant applications for 2020.