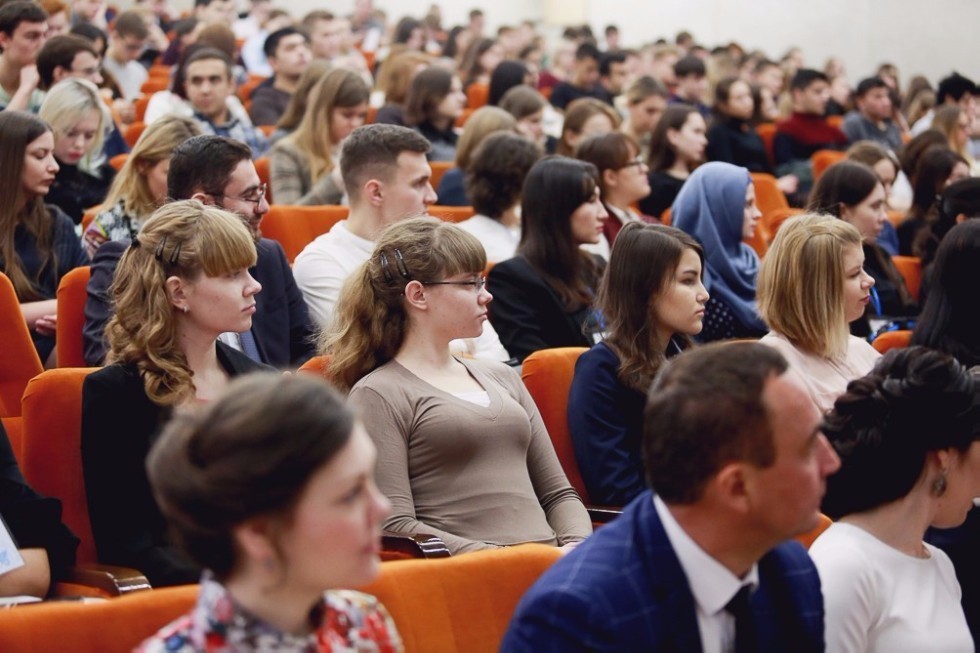 Model UN, named in honor of the Russian diplomat and former Permanent Representative to the United Nations Vitaly Churkin, is taking place in Kazan for the first time. Originally based in Moscow, the regional version has united 100 students from all over Russia and foreign countries. Model UN will last 3 days and will show young politicians how UN works and serve the ground to come up with their own ideas and initiatives.

The opening ceremony of International Model UN took its place in the historical center of the Kazan city, where participants got acquainted with the history of KFU, met special guests of the ceremony and will be working as young politicians for next few days.

Describing the role of KFU in this project, Rector Ilshat Gafurov told about new possible directions Model UN might take. Model UN originally came from Harward University and its students more than 60 years ago, the period during which the Model has been developing in the universities of different countries. Mr. Gafurov expressed his hope it will introduce the participants into the world of international politics: «Wherever you study, there is every opportunity to find a profession you like. The most important thing is your initiative, desire and hard work».

Students actually came to participate in the Model for a reason. Ilnaz Makhmutov from Kazan is taking part in the Model for the first time and here is acting as a diplomat from Sweden: «I didn’t want to take a role of a permanent member state representative because of high responsibility. Here my goal is to see what I am capable of and gain new communication skills». He actually sees his life connected with international relations.

His colleagues – Anna Likomceva from Izhevsk (Ethiopia), Ayaz Islamov (UK) and Damir Vafin (USA) from Kazan – know quite a lot about the system of Model UN. Ayaz and Damir had been a part of the organization committee for a few times before they became diplomats at the Model, and for Anna this is the sixth model this year only, even though she never took part in similar events before. They all demonstrate profound knowledge of their countries’ positions in the modern world. Ayaz has a strong political view on UK’s foreign policy: «As we all can see, Britain is ready to receive refugees on its territory. But Brexit is being done for a reason – the UK doesn’t want anyone to tell them how much and where exactly to place those people. They are ready to help, but on their own conditions only».

The opening ceremony hosted a plenty of speakers, among them there was a local politician Rimma Ratnikova, a historian Engel Tagirov and many others. Vasily Likhachyov, the member of the Central Election Commission of the Russian Federation, told about the current problems, new elections particularly, the UN are experiencing nowadays. He was introduced as «a guest of Kazan», and he responded as: «I am – and I always will be – a Tatarstan citizen, I am not a guest in here». He shared his concern about the rise of disparities on the international arena and addressed the Russian Ministry of Foreign Affairs to propose an initiative of another decade of International law: «Let this idea be announced here, in Kazan. The first decade finished between 1999 and 2000 years, and it witnessed the establishment of a great number of new international organizations and signings of a plenty of agreements and pacts. It was a positive trend everybody felt sympathetic towards».

The speakers eloquently expressed their joys and concerns to the audience. Engel Tagirov, whose speech was full of poetry and references to his colleagues, called Mr. Gafurov Confucius of modern times and a Professor of Culturology. The President of the Cultural Association «Simurgh» Fuad Mamedov Teyub oglu confessed he felt a bit embarrassed: «If I wasn’t wearing a red tie you would see how red my face is» - he started his speech with a joke. But he soon returned to the point, sayng that saving the World is actually the main purpose of the UN. He also noted the importance of the culture impact on politics and human life in common: «Culture will save the world if the world saves culture – this is the slogan of Simurgh Association. Everything created by a human could be embodied in Phoenix or Simurgh – the bird with two wings. One of them is intelligence, another one is morality. And as we all know, a bird cannot fly with only one wing remaining». On behalf of Simurgh Association he also awarded his colleagues – Ilshat Gafurov, Vasily Likhachyov and a Tatarstan politician and a former Prime Minister of Tatarstan Farid Mukhametshin – with diplomas of Culture Ambassadors.

The opening ceremony was officially finished with dancing and singing performances, and now students will continue their work in the capacity of diplomats.