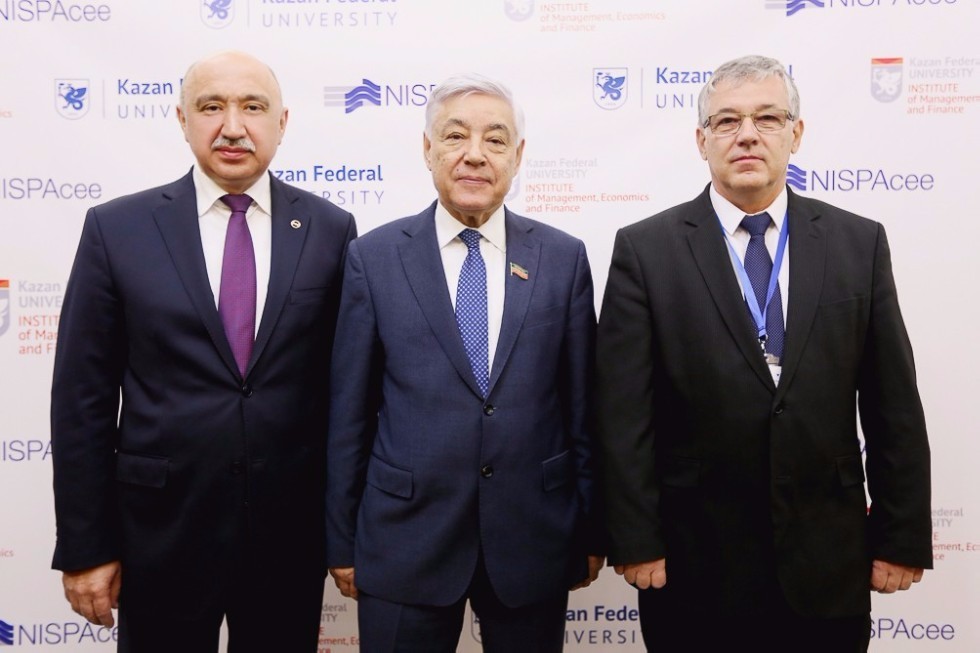 Experts from 35 countries have gathered in Kazan to discuss pertinent issues and exchange experience.

Over 150 participants from Central and Eastern Europe, the USA, France, and South Africa have arrived. Among them representative of the United Nations, International Association of Schools and Institutes of Administration, National Center for Territorial Public Governance (France), American Society for Public Administration, and rectors of a dozen universities of Central and Eastern Europe. In the following three days the participants are going to discuss various technologies and approaches in public governance with a special focus on the hosting side – Tatarstan, a region of advanced innovation in this area. Extending their greetings at the opening ceremony were Chairman of the State Council of Tatarstan Farid Mukhametshin, Rector of KFU Ilshat Gafurov, and President of NISPAcee Juraj Nemec.

Rector Gafurov noted why exactly KFU was a good choice for such an event, «Kazan University is one of the key universities of the region, so we have to be involved in different aspects of the life of our Republic, including public administration. Our Institute of Management, Economics and Finance is the leading provider of governance employees in Tatarstan: it has bachelor programs in Public and Municipal Administration. Kazan University plays a special role in maintaining a high level of professional education of public officials thanks to the Higher School of Public Administration – a base for the advanced training of government employees of Tatarstan, other regions of Russia, Kazakhstan, Singapore, China, and other countries».

He went on to emphasize that KFU has historically been involved in these matters – since its inception in 1804 it graduated governance specialists at its Division of Moral and Political Sciences. It was then one of only two such universities together with Moscow University. Nowadays KFU not only teaches public officials but is also engaged in research activities in this subject area.

Chairman Mukhametshin opined, «We think that holding this conference in Kazan symbolizes the recognition received by our research efforts. It's here where we can work out and implement a unique experience of strategic planning and management of our own development based on innovation and investment in human capital».

Among the projects implemented in this regard is, for example, Electronic Tatarstan, a system of electronic document management introduced under the supervision of the current Minister of Communications and Mass Media of Russia and KFU alumnus Nikolay Nikiforov. This virtualization experience has gained traction across Russia and was adopted at the federal level.

KFU's achievements in this development were specifically mentioned. Firstly, study programs of the Institute of Management, Economics and Finance and the Higher School of Public Administration may soon receive accreditation from NISPAcee. Secondly, the University's engineering and IT departments are the providers of innovations and technologies that serve to automate governance processes. Thus, Kazan University and its partners show the way to be actively involved in this sphere.

Conference attendees have already shared their first impressions. President of Caucasus University (Georgia) Kakha Shengelia said, “It's very important for Georgia because we are now overhauling our municipal administration system. We participate in such events to facilitate this change”. He also spoke about the conference location, “Tatarstan is a place where democratic governance in municipal administration is on the rise. I think you are on the right path when it comes to municipal management. I am for the first time in Russia in the last 10 years, and I hope that links between our universities, between our people will be deeper and tighter because Tatarstan is a very close culture for us”.

Alikhan Baymenov, Chairman of the Steering Committee of the Regional Hub of Civil Service (Astana, Kazakhstan), was of the similar opinion, “Globalization and IT development are new challenges for public service. Citizens become more informed by comparing and evaluating decisions implemented in other countries. In that regard, it's very important to have a common platform where professionals and researchers can unite their efforts and exchange experience. Examples of such platforms are NISPAcee and Astana Regional Hub of Civil Service which unites 36 countries”.

NISPAcee events are aimed at exchanging knowledge and expertise, uniting efforts in solving pertinent problems of public governance. This 25th conference includes discussions on government reform, interregional cooperation, policy implementation, and IT in governance processes. The conference is being held at KFU on May 18th – 20th, 2017.