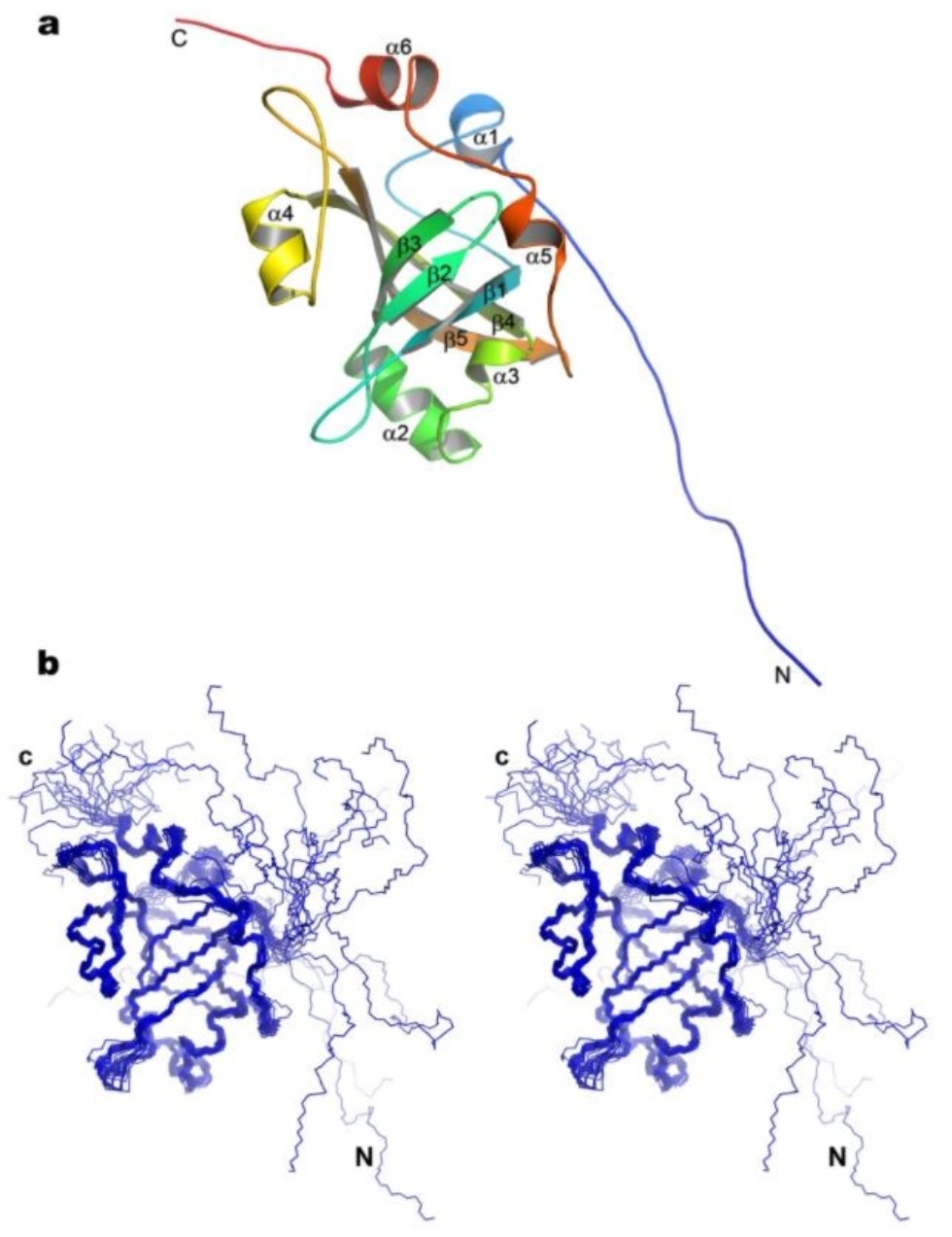 Figure: The solution structure of the HpEst3. (a) The topology of the secondary structure elements of the HpEst3 protein. (b) The stereo view of the ensemble of the final 20 calculated structures. Images were made using PyMOL v. 2.3 (Schrodinger, LLC).

A key role in studying the telomerase of Hansenula polymorpha was played by KFU’s nuclear magnetic resonance spectrometer.

“The work frequency of our NMR spectrometer with a cryo sensor is 700 MHz. It can glance into the structure of the most complex biochemical objects and detect how they interact with cell membranes,” shares Head of NMR Lab, Professor Vladimir Klochkov.

The telomerase was studied by the Department of Medical Physics (Kazan Federal University) and the Laboratory of Magnetic Spectroscopy and Tomography (Moscow State University).

“Telomerase, as many complex enzymes, is not just a protein molecule, but rather a combination of several subunits. A fragment of one of the subunits, the Est2 protein, was studied by us earlier, and now we studied the structure and functions of Est3,” explains co-author, Senior Research Associate Sergey Efimov. “We found out that Est3 is important for the stabilization of the whole protein complex.”

Spectroscopy helped understand the spatial structure of Est3 molecules and the interaction between them.

“When molecules interact, you can see a general picture through resonance frequencies and other spectral characteristics of magnetic nuclei in their structure – how proteins contact with each other and the DNA strand, which subunits are responsible for attaching the enzyme to the DNA, and which move the complex along the chain and restore telomeres,” adds Efimov.

The analogs of the studied yeast proteins can be found in telomerases of higher organisms, including humans. If scientists create medications to influence particular components in the telomerase to suppress its activities in cancer cells, we will be able to counter the progress of oncological diseases.

“As an organism grows, telomeres become shorter. The purpose is to limit the further division of cells which might have amassed errors in their DNA. Such a limitation does not exist in embryonic and stem cells thanks to the telomerase. This enzyme restores telomeres at the ends of chromosomes. A similar process happens during malignant changes in cells. Telomeres and systems of length control exist in all eukaryotes,” concludes Dr. Efimov.