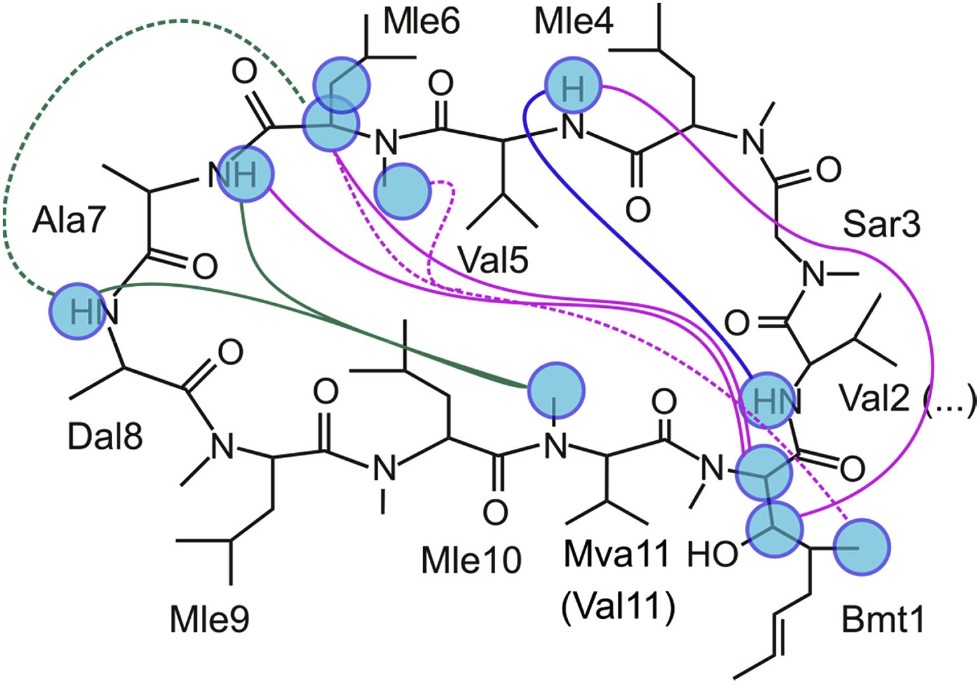 Figure: Long-range NOEs commonly observed in cyclosporins B–E in apolar media (solution in chloroform or in the complex with DPC micelles in water).

A paper saw light in Biochemical and Biophysical Research Communications.

Cyclic peptide molecules of the fungal origin called cyclosporins were discovered in 1970's, and cyclosporin A soon became an important drug due to its immunosuppressive activity. The details of the biochemical reactions involving cyclosporin were elucidated by the beginning of 1990s, but still some aspects of the behavior of this molecule raise questions. Investigation started in the Nuclear Magnetic Resonance Lab (guided by Professor Vladimir Klochkov) at Kazan Federal University in 2008 and was dedicated mainly to physico-chemical properties of cyclosporin A (CsA). Recently, we extended the study to cyclosporin variants with different composition.

Fungi producing cyclosporins exist as two reproducing stages: asexual - soil fungi from which cyclosporin was initially extracted, and sexual - parasitic fungi close to a popularly known genus Cordyceps. Unlike most polypeptides synthesized on ribosomes following the information directly encoded in nucleic acid, cyclosporins are produced on a special enzyme, cyclosporin synthetase. This process is less accurate, hence the final product is usually a mix of several compounds with slightly different chemical compositions.

These small variations, however, have a dramatic effect on the behavior of the peptide used as a drug. Only CsA was found to be an effective immunosuppressant helping people with transplants. Two questions arise immediately: what is the key peculiarity of CsA, and is immunosuppression the only use which we can find in cyclosporins?

It is a well-established fact that the activity of a biochemical compound depends strongly on its three-dimensional molecular structure. Nuclear magnetic resonance (NMR) spectroscopy offers a possibility to reconstruct the structure of a molecule as it exists in a solution or in a membrane-mimicking medium. We found that different cyclosporins have similar structures in similar environments such as solution in chloroform or complex with phospholipid micelles serving as model membranes.

Cyclization of peptides gives them unique properties. In case of cyclosporin, we have an additional reason for unusual molecular behavior: absence of several amide protons, which in typical peptides can form hydrogen bonds and thus stabilize the structure. The shape of the cyclosporin molecule is more rigid compared to linear oligopeptides due to cyclization, but at the same time it still remains relatively flexible. This flexibility is observed in NMR studies as coexistence of multiple molecular forms of cyclosporin in polar solvents. Among all these conformations, only one may be active as a drug, and thus conformational equilibrium influences the medical efficacy of a compound. We estimated the energy barrier dividing the conformers to be on the order of 70–80 kJ/mol, which reveals the nature of the transformation: rotation of peptide bonds by 180?. However, some cyclosporin variants show unexpected behavior: cyclosporin E (CsE) was found to be rigid in a polar solvent DMF, while CsH exists as multiple conformers in apolar chloroform, unlike all other studied variants.

Molecular dynamics simulation reveals peptide chain flexibility on a nanosecond time scale, which is not observed directly by NMR. Simulation of cyclosporin molecules confirmed that CsE molecule is more rigid than other studied variants (A, B, C, D, H). The most interesting result obtained so far is that these peculiarities correlate with the biochemical action of cyclosporins in living objects. Experiments carried out by a co-author from Mari State University (Mikhail Dubinin) revealed that cyclosporins B, C, and D inhibited pore opening in rat liver mitochondria – effect which was observed earlier in the presence of CsA. However, CsE did not show this biological activity.

First, this research sheds light on the structure–activity relationship, or, in a wider sense, on the structure–dynamics–activity correlation. Conformation of the molecule can be a crucial element in some interactions, which is proved by the inability of most cyclosporins other than CsA to participate in the immune response: substitution of a single amino acid prevents needed interaction with target protein, cyclophilin. On the other hand, this substitution turned out to be unimportant for the interaction with the mitochondrial pore complex, in which other factors should be considered: general chain flexibility and the ability of the molecule to penetrate through phospholipid cell membrane.

Second, the possibility of regulating the mitochondrial activity is of great interest itself, because it allows finding a way to treat diseases related to mitochondrial dysfunction. Cyclosporin A does not suit this role due to its effect on the immune system, but maybe its congeners of the wide cyclosporin family could be useful.

In view of the recent findings, the research can be continued in several directions. More variants of cyclosporin can be characterized by NMR and molecular dynamics to reveal elements of composition (e.g., presence of additional amide protons in the peptide chain) responsible for different properties. Structures of the peptides buried in the interior of a model membrane are of special interest, since many biochemical phenomena occur in this environment. Finally, studies of the influence of cyclosporins on living systems such as mitochondria should be continued, too.