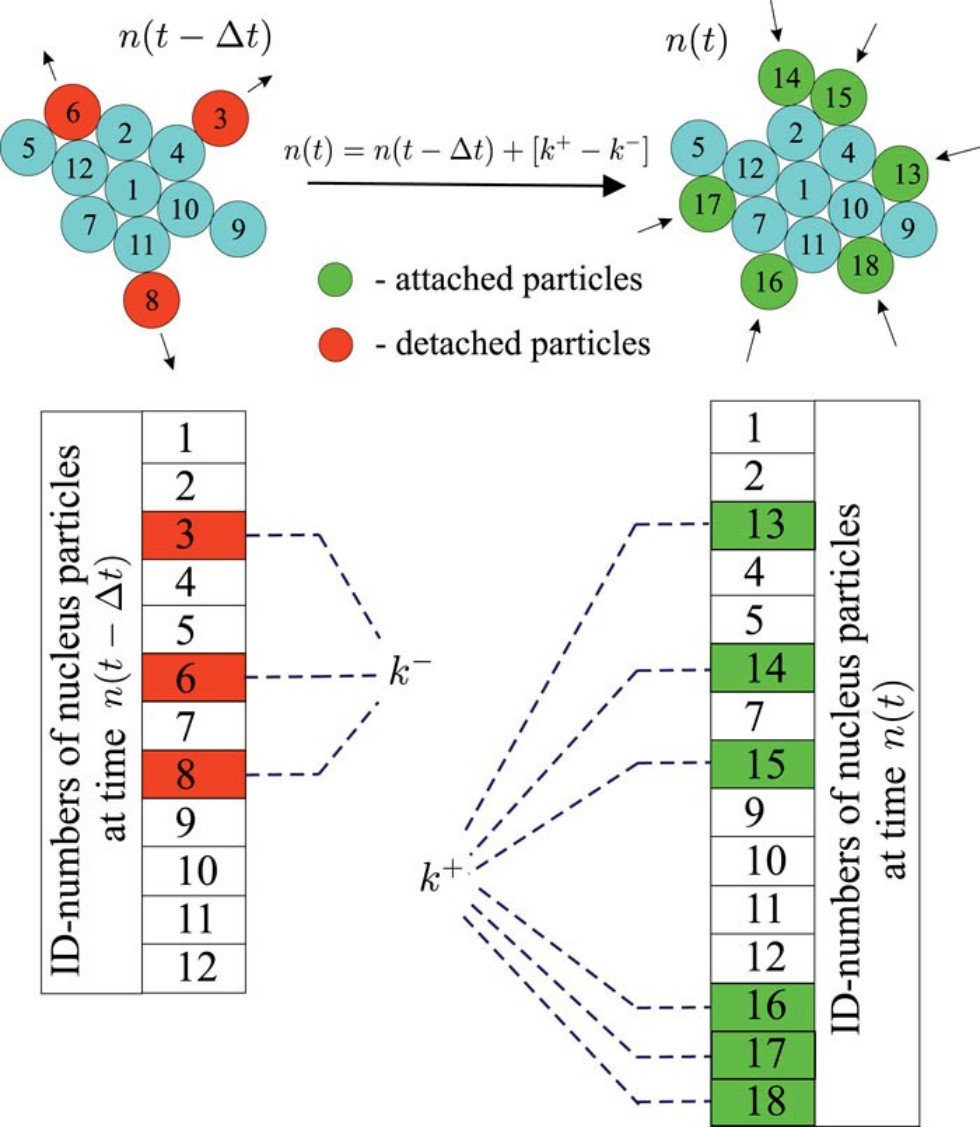 FIG. 1. Schematic procedure for evaluation of the quantities k+ and k− taking into account the identification (label) numbers of the particles of a crystalline nucleus. Particles detached from the nucleus surface are in red, whereas the attached particles are colored green.

A paper by Kazan Federal University saw light in The Journal of Chemical Physics.

The authors propose a new quantitative approach to better measure the crystal growth rate in supercooled liquids. The approach is based on a unique statistical algorithm used in molecular dynamics simulation.

Crystallization occurs with matter in a supercooled liquid or in an amorphous state. According to the classical theory, this process occurs through the formation of crystalline phase foci, called nuclei. The crystal nucleation rate and crystal growth rate in such matter are determined by a number of kinetic factors, among which the decisive role is played by the frequency of attachment of atoms to a nucleus and the frequency of detachment of atoms from the surface of a nucleus. Obviously, the predominance of the atoms attachment frequency will contribute to a stable crystal growth. At the same time, the currently existing experimental methods do not allow the direct measurement of these kinetic factors due to the difficulties associated with the identification of various phase atoms in the volume of the system. Therefore, molecular dynamics simulation is most suitable and affordable method.

The researchers were faced with the task of making an accurate assessment of kinetic factors and constructing their dependence on the size of crystalline nuclei based on molecular dynamics calculations. For this, an algorithm was developed that tracks atomic rearrangements near the surface of each growing nucleus on the fly. Tracking takes place according to the identification numbers that are assigned to each atom. These numbers make it possible to distinguish between crystal atoms and atoms of the parent disordered phase. With this approach, the accuracy of the calculations is orders of magnitude higher compared to existing methods for estimating kinetic rate factors. This accuracy is achieved due to the fact that the calculations are carried out directly without the use of any model functions and adjustable parameters.

Based on the performed calculations, the researchers were able to estimate the crystal growth rate for the well-known Lennard-Jones model system, following the basic definition - through the difference in the atoms attachment and detachment frequencies. This made it possible to reveal the presence of a stationary regime in the dependence of the growth rate of the crystalline nucleus on its size. The results are in good agreement with the prediction of the classical theory of crystal growth.

The results of the study can be used to develop more accurate methods for estimating the rate of phase transitions in systems with various physicochemical properties, for example, in ionic liquids, molecular liquids, polymer systems, and colloidal solutions. Furthermore, these results can be used to develop practical methods for controlling crystallization and melting processes, which is important in various fields (from metallurgy and microelectronics to pharmaceuticals). The results will also be in demand in the development of a rigorous theory for describing the dependence of kinetic rate factors on the size of the nucleus and on the crystallization time. Another interesting and less studied field is the study of the crystal decay processes.

Further research will be aimed at a detailed study of the mechanisms of the crystalline nuclei decay, where the focus will be on identifying factors that affect the crystals decay rate and their stability. The authors’ work will also be targeted at the development of a rigorous universal kinetic theory for describing crystallization rate factors. The results will be applied in the computer design of crystalline materials with necessary physical and mechanical properties.