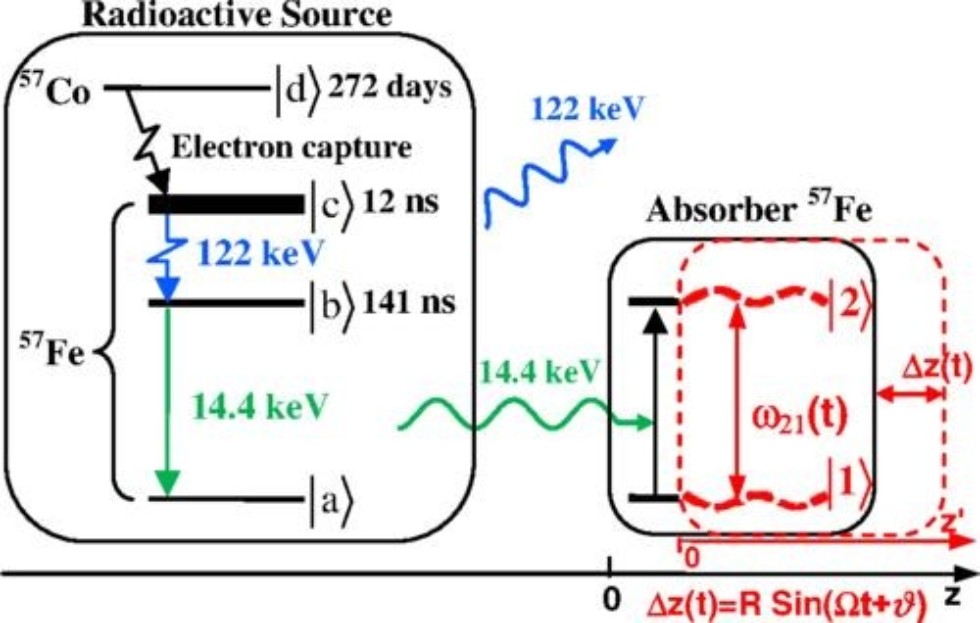 Figure: Energy scheme of the radioactive source of 14.4 keV photons and the vibrating absorber used in the experiment. The 57Co nuclei (left side) in the state |d⟩ decay to 57Fe nuclei in the excited state |c⟩ (with a half-life of T1/2≈272 day), followed by cascade decay: |c⟩→|b⟩ (with decay time T≈12  ns) and |b⟩→|a⟩ (with decay time TS≈141  ns) with emission of 122 and 14.4 keV photons (shown by blue and green lines), respectively. Depolarized recoilless 14.4 keV photons ( λ≈0.86  Å) resonantly interact with transition |1⟩→|2⟩ of 57Fe nuclei when propagating through the single-line 57Fe absorber (right side). They are resonantly absorbed in motionless absorber (black lines). Harmonic vibration of the absorber as a whole (pistonlike vibration) with circular frequency Ω, amplitude R, and initial phase ϑ along the photon propagation direction (marked in red) leads to periodic temporary variation in |1⟩→|2⟩ transition frequency ω21(t) (dashed red curves) due to the Doppler effect. It modifies the interaction of the photon with absorber and can result in AIT (see Fig. 2 and text). The axis z labels the laboratory reference frame, red axis z' labels the reference frame of the vibrating absorber, and Δz=z−z'.

The paper describes an optical “switch” – a device able to let through or stop gamma quanta by switching the acoustic field. Basically, the mechanism makes iron “transparent” for gamma rays when needed.

Mossbauer Spectroscopy Lab of Kazan Federal University showed acoustically induced transparency of a resonant medium for gamma radiation in an experiment. The essence of this phenomenon lies in the transformation of the spectrum of the absorption line into a comb structure consisting of satellite lines spaced from the main line by the frequency of the acoustic field. For the experiment, gamma quanta with an energy of 14.4 keV were used, which are emitted during the decay of the excited state of the iron-57 nucleus.

“By acting on the absorber containing the Fe-57 nuclei with the help of a piezoelectric transducer, it was possible to achieve for the optically dense absorber to become transparent to resonant gamma rays. The absorber was attached to a piezoelectric transducer, which vibrated at a certain frequency and amplitude. At an oscillation amplitude corresponding to a modulation index of 2.4, the absorption of photons with an energy of 14.4 keV was suppressed 148 times,” explains Mossbauer Spectroscopy Lab Head Farit Vagizov. “This effect is analogous to the effect of electromagnetically induced transparency in optics, when radiation in one frequency range is used to control electronic transitions of atoms in another frequency range. As you know, the effect of electromagnetically induced transparency in atomic media has a fairly wide area of potential applications: the creation of controlled delay lines, devices for recording and reproducing quantum information, frequency standards in atomic clocks, and much more.”

This effect showed that with the help of low-frequency (~10-40 MHz) acoustic excitation, it is possible to control the process of transmission of high-frequency electromagnetic radiation with a frequency of more than 1013 MHz through the resonant medium. This effect may turn out to be useful for controlling the generated radiation on modern synchrotron sources and X-ray lasers, as well as for creating promising quantum devices.