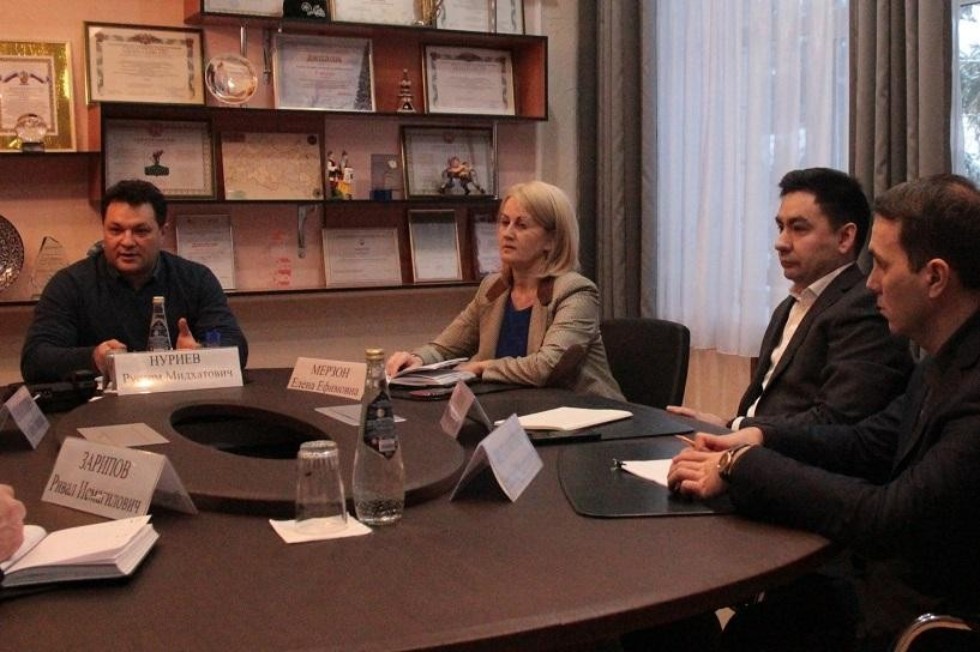 The meeting was attended by Elena Merzon, Director of Elabuga Institute of KFU and Timirkhan Alishev, Director of the Situation Analysis Center of KFU. They presented a project of the future coordination council, which should develop a strategy for the development of the city’s education system, contribute to enhancing the network interaction of schools, colleges and the university. The implementation of the projects will result in an increase in the quality of education, interdepartmental interaction of the regional educational institutions.

It is worth noting that today about 74 thousand people live in the city; about 7 thousand of them are students. This is 9% of the total population. Educational institutions of the city train personnel for various spheres of life: industry, culture, medicine, education. The new interaction of these structures, according to the speakers, will allow giving a new round both for the development of educational institutions by modernizing and improving the training methodology, and for the development of the territory.

The participants agreed that members to the coordination council will be appointed in the nearest future. It is planned that it will include directors of schools and colleges, representatives of the Alabuga Special Economic Zone, and representatives of cultural institutions. Moreover, it will start the development of a new brand of the city “Elabuga – a city of education and culture”, proposed by Ilshat Gafurov, Rector of Kazan Federal University.

Today Kazan Federal University implements many large-scale scientific, educational and enlightenment projects in Elabuga, they involve children of different ages, adults and representatives of the older generation. Among them are “KFU Children's University”, “Science Night”, “KFU Scientific Landing”, “Intel Summer”, “Digital Summer” projects for preschoolers and schoolchildren of the city, and “Third Age University”. KFU is also a center for the training of teaching staff for poly-lingual complexes of the republic, the first of which will be opened in Elabuga this summer.

11
Education Science Leadership Competitions Student Life International Culture Sports Cooperation News of the reception
Other news and announcements
"Scientists to Schools": all-Russian lecture series was held at Elabuga Institute of Kazan Federal University
Press conference took place at the House of Scientific Collaboration.
A conference dedicated to the memory of academician Kamil Valiev took place at the House of Scientific Collaboration.
Student of the Year at Kazan Federal University 2020
Students of the Yelabuga Institute of KFU became scholars of the Academy of Sciences of the Republic of Tatarstan
Candidate thesis offers unique improvements to handwritten signature recognition
Young activists receive awards at Our Tatarstan - Land of Opportunities Forum
Yelabuga Institute KFU invites high school students to the CINEMA Stars language camp
Best science clubs of the year awarded at Kazan University
KFU has risen to the 90th position of the TNE international rating in the direction of "Education
International scientific and practical conference was held at Elabuga Institute of KFU
The phenomenon of educational resilience is investigated at the Elabuga Institute of KFU
The presentation of the Czech language study program was held at the Elabuga Institute KFU
'The Bremen Town Musicians': a scientific interpretation of an animated film
Student of the Elabuga Institute of KFU became an Ambassador Mail.ru Group
House of Scientific Collaboration opened at Yelabuga Institute
University School of Yelabuga opens doors
Rector Ilshat Gafurov contributed to the August Teachers' Conference in Yelabuga
President of Tatarstan Rustam Minnikhanov visited the University School of Yelabuga
Principal of Yelabuga University School shares info about the institution's concept
Final inspection of University School renovations conducted by Rector Ilshat Gafurov
Āõīä ā ėč÷ķūé źąįčķåņ
Ēąįūėč ļąšīėü? Šåćčńņšąöč’

Ōīņīćšąōč’ čē ģąņåščąėą: Kazan Federal University Initiates the Creation of a Coordinating Council for the Development of Education in Elabuga Region