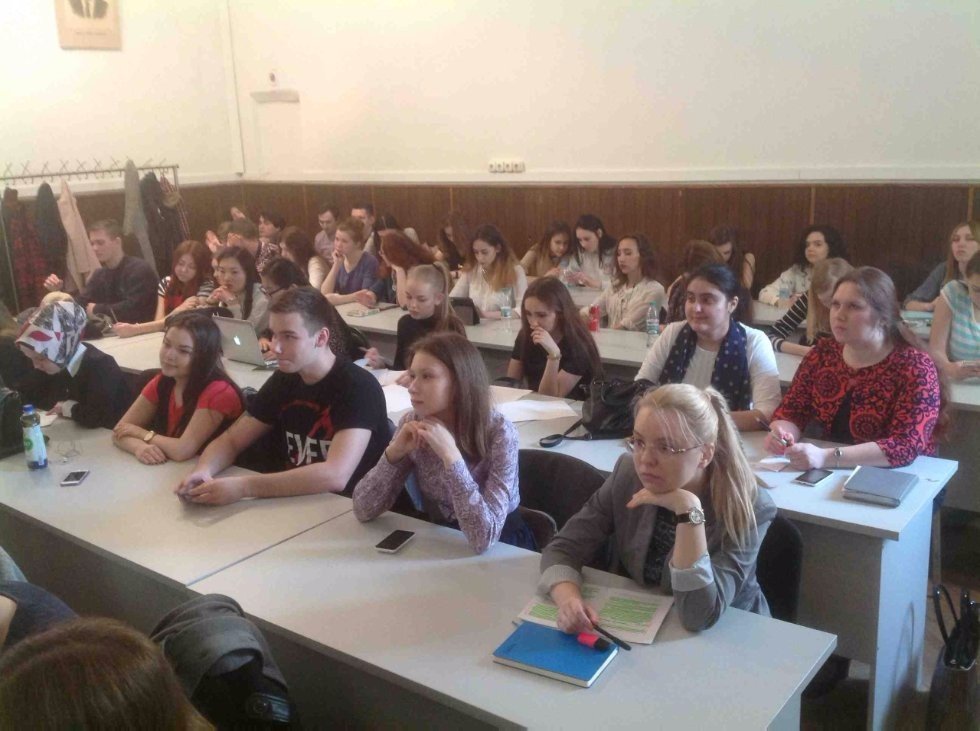 As part of the planned first made Pavel Vakhrushev, 2nd year student, shared with the audience lighting features of interethnic and interfaith relations on various Internet sites. Subject, of course, vital, and very urgent on the agenda not only to the Russian media, but also of the world. Current study was prepared under the supervision of associate professor of the theory and practice of electronic media Spirchagova Tatiana. Also, fourth-Kirill Zaisanov today completing his bachelor's degree in the KFU under the direction of associate professor of journalism Roman Bakanova presented the image of the journalist in mass culture. The speech aroused discussion, questions raised by the Rapporteur confirmed the undying interest in the issues raised.

Then the floor gave the only girl from among all announced speakers, master of the 1 year of education Oksana Kruglova, which is under the supervision of Professor, Doctor of Economics, Head of the Department of Public Relations and Applied Political Science Galina Morozova shared with their younger counterparts on training methods workshop and methods of influence on the process of mediatization imaging of cities. For Kazan, has experienced more than one event under brand world-wide, this issue has now become one of the most important and weighty.

Lighting of sports on television considered Salavat Muhamadullin student of TV-3 course. Not only talking, but also demonstrated the screen of journalist excellence criteria, adding to his scientific report video. The study is written under the supervision of associate professor of broadcasting and TV production Lilia Huzeeva.

Completed hour and a half session Rail Sadretdinov, 3rd year student. In the footsteps of the history of the Tatar advertising in periodicals (Tatar matbugatynda balalar reklamasy tarihy ezlәre buylap) was presented at Tatar original report with a colorful presentation in Russian. Associate Professor, Department of Journalism Tatar Lyailya Sabirov made not only to teach third-year head, but in general was in charge of the program of the plenary session, the work sections.

The words of special thanks to Roman Bakanov conference moderator. Great energy is leading not only to enliven the discussion process, but also orders the entire course of the student's scientific meeting.

As part of the Day of Science at the Department of the Graduate School of Journalism and Media Communications after successful plenary session opened seven parallel sections, where on their scientific researches reported students of all faculties.

Keywords: Plenary session opened Science Day 2016 at the Department of the Graduate School of Journalism and Media Communications ISPS.