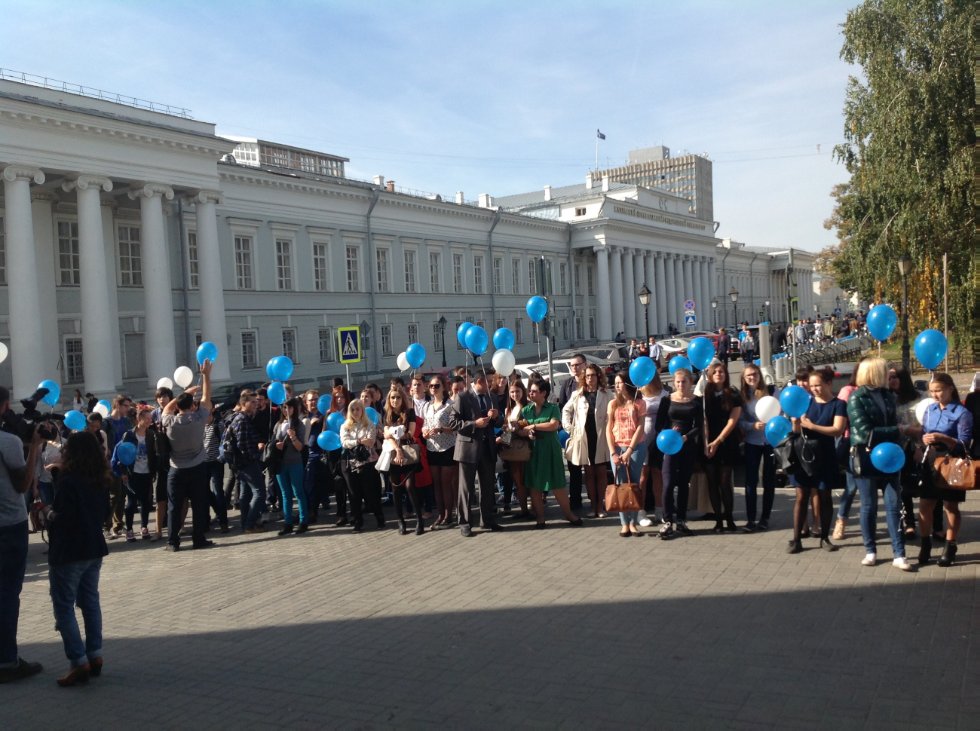 Escalations in recent conflicts in the world, both in the Middle East, as well as directly at the borders of the Russian Federation, pose in front of the scientific community, public authorities and law enforcement agencies in the region specific task of regional security and the security whole of the Russian socio-political space. This was the main prerequisite for the holding of September 21, 2015 the Department of Youth Policy of KFU together with the Department of Conflict Studies of ISPS round table on the theme "New challenges to Russian national security: the impact of modern international terrorism."

The main issues discussed at the round table were:

- Expansion of the Islamic state and the international crisis over Ukraine as a threat to Russia's national security;

- The impact of the threats of international terrorism in the regions of Eurasia and the Russian Federation subjects;

- Youth extremism in Russian society and methods of prevention (for example, the Russian regions).

In his opening remarks to the round table Head of the Department of Conflict Studies of KFU prof. Bolshakov A.G. noted the great importance of student flash mob to mark the Day of Peace and invited all those present to give him no less attention than to the actual current scientific and practical activities.

Opening the round table Advisor to the rector of KFU for Security and Cooperation Guzeyrov R.A. drew particular attention to the audience and participants on the issue of awareness of the dangers and threats posed by  prevailing situation of terrorism around the world. More information about these threats is described in report by A.G. Bolshakov. A report by Professor of Nizhny Novgorod State University. Lobachevskii Grachev S.I. delineated the specifics of threats from the ISIS to the US and Russia. The main tool in the fight against these threats Vavilov identified the education system, the so-called "struggle for the minds." What is agreed with him and made their proposals on cooperation in the field the other participants of the round table. Guzeyrov R.A. said that the work in this area should start with high school students.

Lecturer of the Department of Conflict Studies, Ph.D. Mansurov T.Z. made a presentation on the regional scenario, the geography of the threats outlined above, the roundtable participants, both in Russia and in the world space. In his story, he touched the problems of interaction between regions in the fight against these threats. A clear illustration of the performance Mansurov T..Z in terms of cooperation between Russian regions was welcoming address to participants of the round table. Huseynov Y.M. - Representative of the department of civil and patriotic and moral education of the Ministry of Youth Affairs of the Republic of Dagestan presented the performance of the Ministry of Youth in the region over the past year and a half. Yusup Magomedovich spoke about the threats and challenges in the political space in the region and on the effectiveness of efforts to prevent extremism, terrorism and xenophobia. He expressed hope for cooperation in the field of activity being discussed with the participants of the round table.

Regional specificity the conversation continued Associate Professor, Department of Social Sciences, a branch of KFU in Naberezhnye Chelny, Ph.D. Aetdinov E.H. The theme of his report was devoted to the problem of the Crimea, as a subject of the Russian Federation and the political situation there. Particular attention is paid to the speaker of the Crimean Tatar community of the peninsula, his ethnicity and political positioning, as well as on the nature of the social problems of Crimean average for the population as a whole.

Youth Policy in the direction of anti-terrorist measures was made rector Adviser on Security and Cooperation CFI Sadykov M.Sh. He made a clarification on the difference of radical forms of Islam, in terms of statistical data showed an increased level of threat of youth recruitment religious groups, talked about possible instruments to counter youth involvement in illegal activities. For more information about the work in online communities and networking communities to counter recruitment in its report said Associate Professor of Conflict Studies of KFU, Ph.D. A.V. Ivanov

Youth involvement and support of the round table were mentioned by students of KFU. It is they who originated the idea of flash mob dedicated to the Day of Peace, celebrated annually on 21 September. In a multi-year initiative of the students of Conflict Resolution, with the active support of students of different areas of study at the university, with the organizational support of the Department of Youth Policy and the Department of Conflict CFI culmination of the event were released into the sky white messengers of peace - pigeons and more than two hundred balls of white and blue, symbolizing the desire of students to conflictless, peaceful coexistence of the population of our planet.