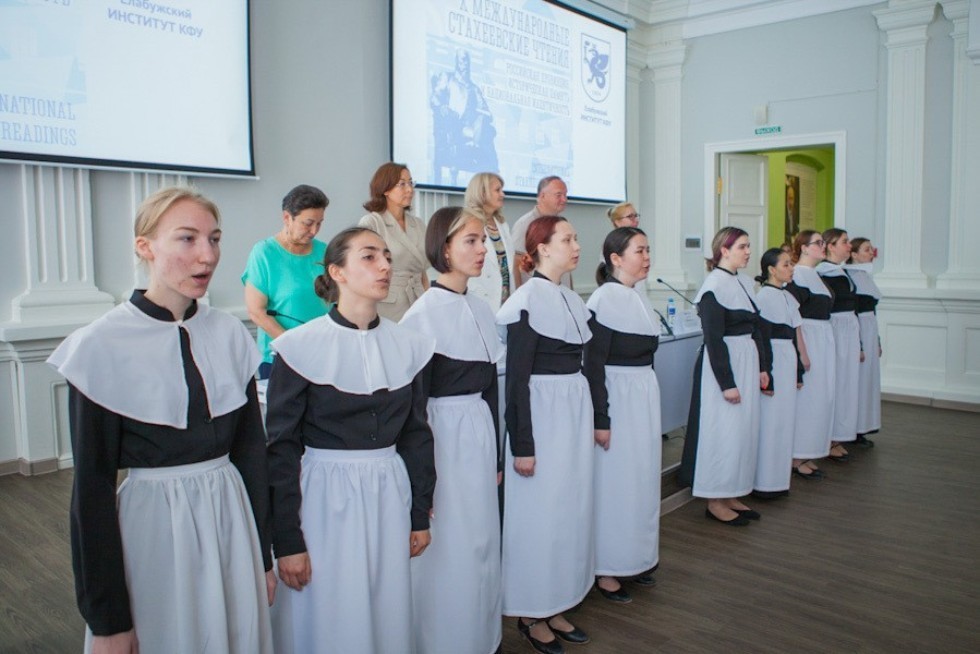 Elabuga Institute of KFU welcomed area studies specialist, scholars and descendants of the Stakheev dynasty for the X International Stakheev Readings. About 200 listeners joined remotely the video conference on the first day, and about 100 people took part in the plenary session.

Stakheev Readings is a scientific brand of Elabuga Institute of Kazan Federal University. For the first time the conference named in honor of the Stakheevs dynasty of Elabuga merchants and benefactors took place in July 1990. Since that time, holding the Stakheev readings every two years has become a good tradition of the university.

The X International Stakheev Readings opened with the student anthem "Gaudeamus" performed by the choir of the Elabuga Institute. Director of the Institute Elena Merzon made a welcoming speech to the guests of the forum. “For more than 30 years, the International Stakheev Readings have brought together a wide range of scholars in the field of history, philology, literature, economics and the museum sphere. For a long time, we did not have the opportunity to meet, to communicate warmly with each other, to discuss joint scientific projects. I am sure that during the conference, the participants will be able to exchange views and establish new business contacts,” said the director.

The Deputy Chairman of the Public Chamber of the Republic of Tatarstan, General Director of the Elabuga State Museum-Reserve Gulzada Rudenko greeted those present. She emphasized the importance of the event noting that it would contribute to the spiritual education of the young.

This year, the scientific forum welcomed scholars from the Institutes of History of the Russian Academy of Sciences, the Academy of Sciences of the Republic of Tatarstan as well as researchers from more than 20 top Russian and foreign universities.

The theme of the X International Stakheev Readings was defined as "Russian Province: Historical Memory and National Identity". Among the key participants in the forum is Galina Ulyanova, Doctor of Historical Sciences, the regular participant to the conference Sergey Korshunov, vice-rector of the Moscow State Technical University. Traditionally, the guests of the Stakheev Readings were the descendants of the merchant dynasty.

The plenary session emphasized the special role of studying historical documents, diaries and revealed the peculiarities of the Russian province from the point of view of local history, philology, literature, economics and museums activities.

After the plenary session, the guests were invited to the Museum of the Book for the presentation of the illustrated collection of biographical materials “History in faces”. Professor Anatoly Razzhivin acquainted the guests with the literary collection "University Parnassus", the authors of which are veterans, teachers, students and graduates of Elabuga Institute. After the presentations, everyone could receive both editions.

“This conference has a very rich history. It was first held back in 1990 and resumed in 2000. Since then, every two years the Elabuga Institute has been holding the Stakheev Readings. The importance of the merchants’ activity is indisputable, because it was, they who played the main role in the development of science, economics and education”, said professor Anatoly Razzhivin who shared his impressions.