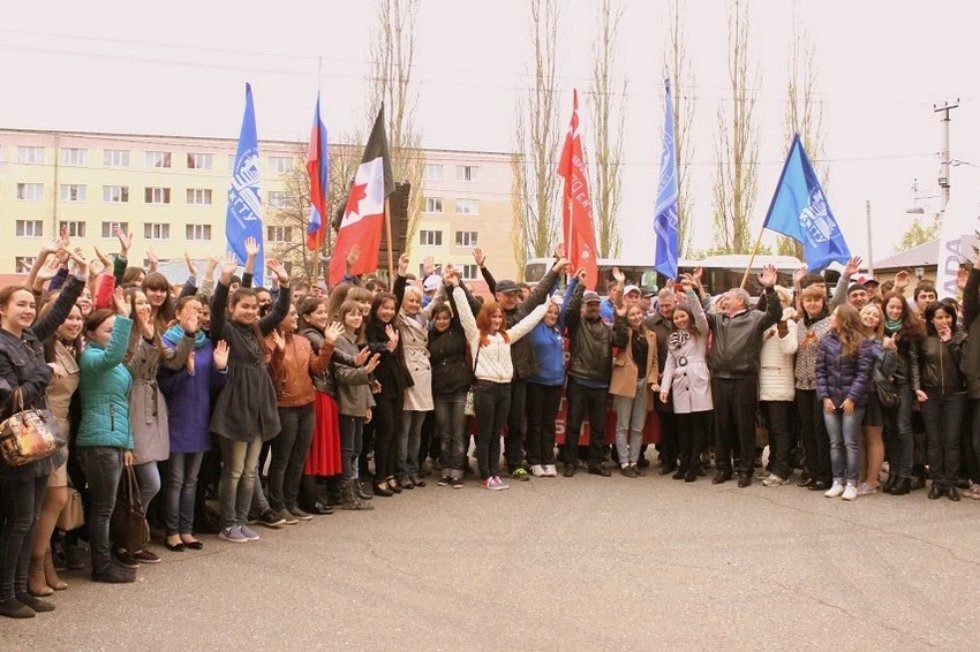 On May 3 on the University square of Yelabuga institute of the KFU ceremonial meeting of delegation of the XIII international students’ run devoted to the 71st anniversary of the Victory in the Great Patriotic War has taken place. The rector of KFU Ilshat Gafurov, the rector of IZHSTU Boris Yakimovich, the director of Yelabuga institute of the KFU Elena Merzon took part in the event.

At this time for guests and invited persons on the University square of Yelabuga institute of the KFU the real holiday was developed: with choreographic and vocal turns on-stage performance groups of higher education institution acted, and in institute’s garden the field kitchen has settled down, here an entertainment for guests of a holiday – soldiers’ porridge was prepared.

We will remind that the international run in honour of the Great Victory carries on traditions of students’ run of the 70-80th along the hero-towns of the USSR. In the 2003rd year rectors of two technical universities – Izhevsk State University and Belarusian National University– have suggested to organize the First international run from Izhevsk to Minsk. Since 2008 several higher educational institutions of the Volga Federal District have joined this action.

"For me it is the honour to participate in such an event, - shares impressions Kirill Filippov, the participant of the action, the student of IzhSTU named after M. T. Kalashnikov, - this run is organized in order to make young people remember the history, honoured feats of their relatives, and appreciate things that they have presented to us – the peaceful sky over our heads! I am proud of being able to fulfill such mission".

Ilshat Gafurov and the rector of IZHSTU Boris Yakimovich performed a welcome speech for the participants of run and guests of the event. Welcoming guests and participants of run, Ilshat Rafkatovich has emphasized importance of such events and has thanked students for the presented activity: "This action connects historically important events, different generations and all of us like a red thread. And it is very symbolical that you, the younger generation, will pass a way of thousands of kilometers and you will reach the destination, like in the past your great-grandfathers and grandfathers went - someone on foot, someone on tanks … towards the Victory". Speaking about the importance of such actions in patriotic education of youth, Boris Yakimovich has noted that during organization and carrying them out there is an acquaintance and unity not only among students, but also among the teaching staff of higher educational institutions. During this period a valuable exchange of experience and knowledge takes place. Boris Anatolyevich is convinced that in this way students become sincerely richer and brighter.

For the first time this year lilac saplings from Votkinsk became a gift for higher educational institutions participating in students’ international run. "The Lilac of Victory" from Udmurtia will make a trip with students’ run. In Kazan, Cheboksary, Nizhny Novgorod, Smolensk and Minsk lilac squares in honor of the Victory will be put. Today Victory Avenue has been put in a garden of Yelabuga institute of the KFU.

This year the international students’ campaign has found strategic partners represented by the largest in Russia car producer JSC “AVTOVAZ”, also by such campaigns as LLC “Leo Smart Lider”, CJSC “SAKTON”, LLC “HOLSTER”, etc. Within the event promotion action of JSC “AVTOVAZ”, during which new models of the car maker – LADA Vesta and LADA X-ray have been shown to guests and participants of run, has taken place.

At 5 p.m. participants of run started from University Square towards the Memory Memorial, where festive meeting has taken place. The deputy head of executive committee of EMR on social problems Lyudmila Rybakova who was present at meeting on behalf of the head of EMR Gennady Yemelyanov has thanked participants and organizers of an action for an initiative in perpetuation of memory of heroes of the Great Patriotic War. After a solemn Moment of silence several tens bright red spheres released by students and guests of a holiday have soared in the sky as a sign of great appreciation and imperishable memory of the winner-nation.

Meeting has come to the end with putting the flowers to monuments to heroes of the Great Patriotic War and to "Eternal flame".

The route of the international run-2016 is as follows: Izhevsk - Yelabuga - Kazan - Cheboksary - Nizhny Novgorod - Smolensk - Minsk – all in all, more than 2 thousand kilometers are to be passed by participants of the action. In all cities students will be participants of solemn meetings in honour of the Victory Day and meetings with veterans of war. Promotion actions of sponsors of run will also take place.

On May 8 students and teachers of BNTU will meet participants of run at Kurgan of Fame (about 20 km from the capital of Belarus), where meeting and a friendly welcome will take place. Then they will go to meeting at the BNTU’s main building, where students and veterans of war of the Belarusian University will lay flowers to a monument to the fallen Heroes.

Source of information: Ekaterina Saybel, press service of Yelabuga institute of the KFU

Ôîňîăđŕôč˙ čç ěŕňĺđčŕëŕ: Yelabuga institute of the KFU is the participant of the International campaign in honour of the Victory Day