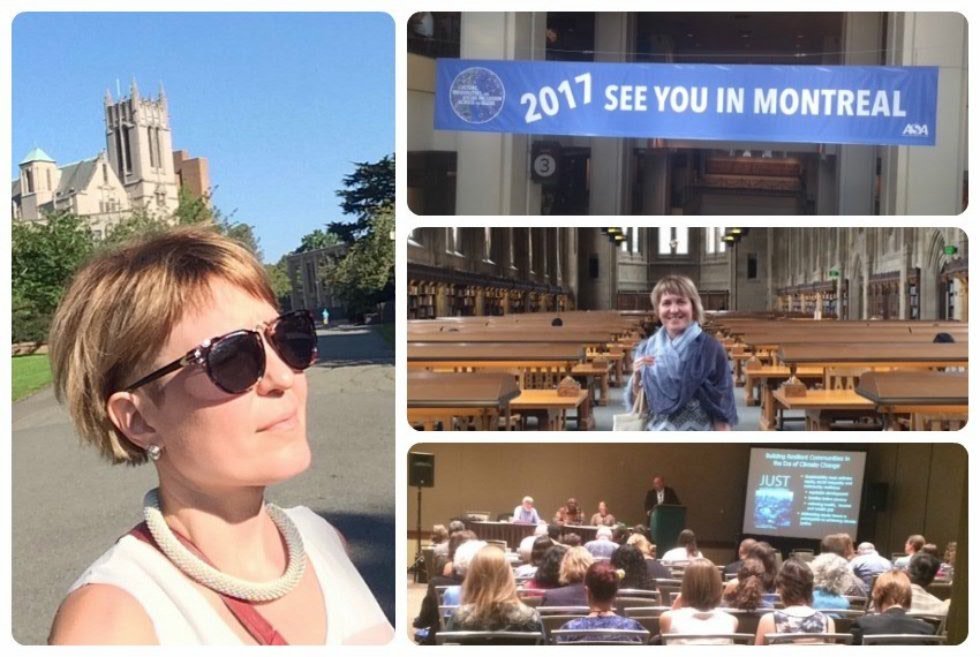 The event was held recently in Seattle (Washington, USA)

The conference is held annually by the American Association of Sociologists and is one of three "top" scientific forums for Social Research. This year more than 6000 members of the Association from all over the world participated in the conference.

The scientists presented their research work relating to a wide variety of spheres of human activity: problems of the city and its influence on a man, social injustice and social resistance in the world, climate changes, ethics in healthcare, etc.

Participation of a scientist from Elabuga Institute of KFU, associate professor of philosophy and sociology, candidate of philosophical sciences, Albina Garifzyanova has turned to be possible within the framework of the Programme of improving the competitiveness of KFU. The report presented at the conference by our researcher touched upon the desire of Russian youth to master blue-collar occupations.

The research was conducted in 2015 by the Center of studying youth cultures of Elabuga Institute of Kazan Federal University (supervisor - Albina Garifzyanova) together with the Ulyanovsk public organization "Social Initiative" —ő÷ņ–“", the specialists of Ulyanovsk State University, Center for Youth Studies of Higher School of Economics in 3 Russian cities : St. Petersburg, Ulyanovsk and Elabuga

The keyl problem of the study was the demand for blue-collar occupations among the youth. The project embraced not only young men and women but their parents and experts: representatives of local business, primary and secondary educational institutions, municipal governments and recruitment agencies. 63 sociological interviews with young workers, 24 interviews with their parents, 18 interviews with experts were taken and 9 focus groups were conducted.

On the background of the general opinion that school leavers do not tend to become workers, it was interesting to find those who do not regret that they have chosen working career and see a great life perspective in it. The project covered a wide range of blue-collar occupations and various sectors of the economy. The structure of the samples of parents and experts was also representative.

The results of the research, according to Albina Garifzyanova were interesting to her foreign colleagues, as the image of Russia, especially of Russian youth is very common abroad, deprived of bright chracteristics, features, comparisons

Moreover the developed countries have also faced a crisis in the training of young workers. Young people of indigenous origin are not eager to choose a profession of a carpenter, plumber or gardener. All niches are filled by migrants. Sharing the results of research in this field may help to find solution of this problem.

The scope and level of the forum, according to Albina Garifzyanova, inspire respect. About 6,000 official members have been registered, notwithstanding those who have visited a particular section as free listeners.

52 sections worked in the frame of the forum, our scientist has been interested in "Economy", "Sociology of Education", "The study of emotions of a modern man ", "Biology and Society", "Medicine", "Music Sociology", "Migration".

It should be noted that researchers of Elabuga Institute of KFU annually participate in the top conferences of federal and international level. According to the scientist, participation in such events is very important for both of the Kazan Federal University (in the frame of the Programme of improving the competitiveness of KFU), and for the researcher. Albina Raisovna believes that such large-scale research activity serves like a breath of fresh air. And the most productive events take place not during public presentations but in unofficial conversations during breaks, "when you are on the same wavelength to successful experts of this field". It is here that "you see in what direction the science is developing", it is here where a productive dialogue is possible which provides food for further scientific research

Valuable exchange of experience between the leading foreign scientists and our young researchers is of great importance for the KFU in the frame of the project 5-100 to improve the competitiveness of the university.

Today Garifzyanova Albina is a member of another research project of the St. Petersburg High School of Economics on the study of positive ethnic fields on the youth scenes. "We consider ethnicity as a unique resource in the socialization, resource that helps to create a specific cultural product, such as music, - says Albina Raisovna - I study the creative work of the youth group that performs underground music, using colorful national motifs - a group called "Baradj ". Its members are the former citizens of Elabuga. Having moved to Kazan, they gained popularity among the capital's music lovers. But more about them a bit later".

Source of information: Catherine Saibel, the press service of Elabuga Institute of KFU

‘ÓÚÓ„ūŗŰŤˇ ŤÁ žŗÚŚūŤŗŽŗ: Scientists of Elabuga Institute of KFU participated in the World Conference of Sociologists