The projects devoted to Lev Tolstoy were presented In KFU 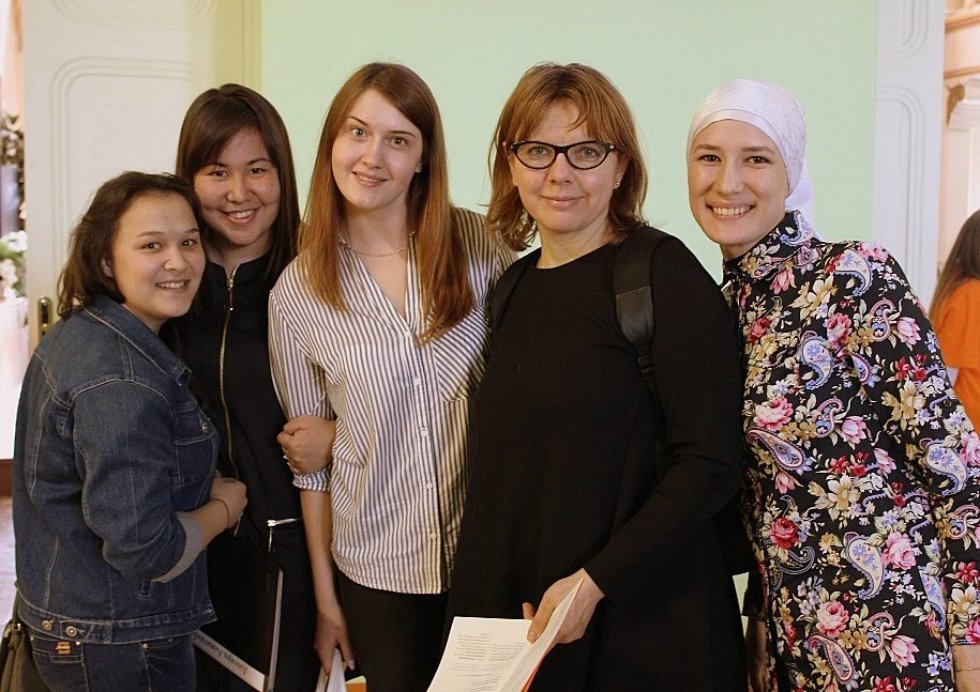 Fekla Tolstaya presented to students and teachers of the Elabuga institute of KFU the interactive projects devoted to the creativity of her great-great-grandfather, great writer - Lev Tolstoy.

On June 8 at the Elabuga institute of KFU within the XX-th International scientific and practical conference "Museum of the Digital Era, Opportunity and Challenges» the meeting of students and teachers with famous Russian journalist, teleradio host, producer and director Fyokla Tolstaya has taken place.

Prior her performance the guest has given a parting word to the beginning journalists - students of the faculty of Russian philology and journalism of the Elabuga institute: "It is necessary to understand that the journalist is not the PR manager. He must be fair before readers, the audience and himself. And to be interesting to the audience, it is necessary to be engaged in the fact that it is interesting to you!"

The presentation of several interactive projects systematizing the biography and works of the great Russian writer - Lev Tolstoy became the main subject of the meeting. Projects have been created by creative group under the leadership of the great-great-granddaughter of the writer who as it has appeared, is not only the bright journalist, but also the many-sided, keen personality.

One of the introduced drafts «All Tolstoy in one click» is the reference electronic version of 90-volume collection of works of Lev Tolstoy. It has been created with the assistance of the State museum of L. N. Tolstoy, the Memorial estate "Yasnaya Polyana" and the ABBYY Company developing technologies in the field of recognition of texts. The collected works contain not only the known works of the writer, but also rare stories, diaries, letters, and comments. Help in the creation of this project was given by several thousands of volunteers from 49 countries of the world. Already today everyone can download free of charge on portal www.Tolstoy.ru everything, even the most rare works of the writer and to read them on the computers, tablets and smartphones.

The application for reading "Live pages" became the following project which was provided by Fyokla Tolstaya. It is the interactive literary encyclopedia filled with large volume of the additional information from different areas: history, linguistics, geography. With "Live pages" reading turns into profound studying of the whole era and the content can be analyzed easily thanks to the additional functions of the application. The immortal novel of Lev Tolstoy "War and Peace" became the first work available in a new format.

"There is so much positive and inspiration has presented this acquaintance! We have opened for ourselves the most interesting facts. It appears, in the “Live Pages” application "War and peace" of Lev Tolstoy can be read in the "spread-out" type now: chapters with the des­cription of war separately from heads with the des­cription of the peace, it is possible not only to trace separate events from the life of Natasha Rostova, Pierre Bezoukhov, Andrey Bolkonsky and other heroes, but also in schemes to see interlacings of their destinies. There is also a des­cription of heroes, even pictures. Parallels are given here: the described events in the novel and really occurring events in Russia. It is dream! It will be interesting to prepare for state examinations now!", a 4-th year student of the faculty of Russian philology and journalism Elena Matveeva has shared impressions of the meeting.

Source of information: Dinara Almagambetova, press service of the Elabuga institute of KFU