The University for 'why-askers' begins a new season 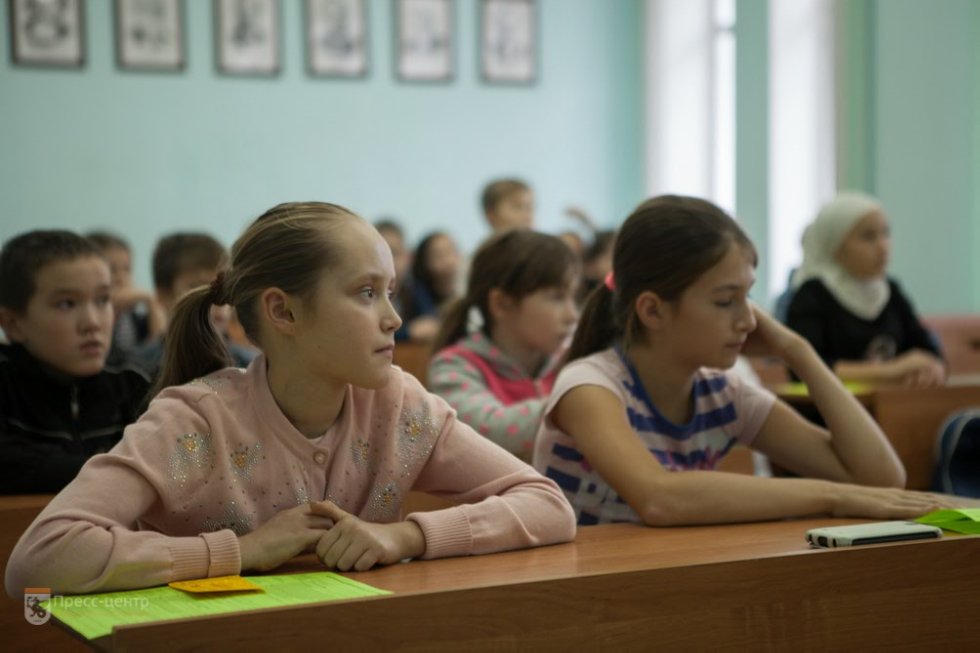 The ceremonial opening of a new academic year at Children's university was held at the Yelabuga Institute of KFU on October 16.

The deputy director of the Yelabuga institute of KFU on scientific activities Vladislav Vinogradov congratulated the young listeners with the opening of a new educational season.

"I congratulate you on the fact that today you have become students, having tried on the high status much earlier than the others. You can be proud of it from now. The status "student" obliges to study, though, as a matter of fact, this obligation is very pleasant, otherwise you wouldn't come today here, and we wouldn't see here the hall which doesn't accommodate everyone to become students of Children's university".

This day children and their parents were waited by the entertaining and fascinating program. The informative show "The House for Magic Performances" was provided by the special guest of a holiday - the Naberezhnye Chelny state puppet theater. Actors told about subtleties of theatrical doll art, about how dolls and masks for performances are made, and also showed small representation. The most inquisitive students of the University managed to try on masks and wigs, to try out as the actor and to get acquainted closer with the work of doll actors.

The acquaintance with the Children’s university continued at the lectures. The associate professor of the theory and technique of physical culture and life safety Roman Petrov told how to become an Olympic champion. The rights and the child's obligations were spoken about in the other classroom. Assistant professor of the theory and methods of teaching law and jurisprudence Valentina Kuzmenko explained the listeners what is the criminal and administrative responsibility of minors on the examples of animated films "Wait for it!" and " The Three from Prostokvashino".

Performance and lectures gave the children not only knowledge, but also the sea of positive emotions. Elina Timirshayekhova studies in Mendeleevsk, she arrived at the Children's university for the first time. "We were told about what the theater is, showed how dolls are made. I want very much to be taught to solve interesting mathematical puzzles, and to learn to draw beautifully ", - Elina shared.

Classes at the Children's university are not popular only with children, but also their parents. Naylya Mubarakshina, the first grader's mother: "We were reported by our class teacher about the classes at the Children's university. I would like the child developed physically and he attended intellectual classes. I like the idea of this project very much; I also want to attend parent classes. Not always answers for the urgent questions can be found on the Internet, and here there are specialists who can suggest and help".

To see school students in the classrooms and laboratories of the Yelabuga Institute is a usual thing, and to become a student, without having finished the elementary school. It became possible thanks to the Children's University project which celebrates the fifth anniversary this year. Success secret is quite simple, according to the project manager Farida Gazizova. These are competent and high-quality selection of exciting and educational activities for the constant work with parents and pupils, the professionalism of teachers lecturing and, of course, the desire of children for new knowledge.

It should be noted that the opening of magistracy for pupils of the 4-5 forms will become «a highlight" of the project this year.

«This year at the initiative of the director of Yelabuga Institute of KFU Elena Merzon, the children's magistracy will be opened for those children who have been attending the Children's university for 5 years. The educational modules on Economy, Right, Mathematics and many other disciplines were developed by our teachers. Classes in the magistracy will come to the end with a big economic game", - Farida Samigullovna explained.

As organizers told, the new scopes of lectures on a wide range of disciplines are prepared for little students: History, Right, Mathematics, Chemistry, Physics, Astronomy, Robotics and some others. The program of parent lectures is updated. It has already been traditional that school students from Mendeleevsk, Naberezhnye Chelny, Nizhnekamsk, Mamadysh, Zainsk and other towns become students of the Children’s university.

Children's University doors will be opened once a month on Sundays. The next session will be held on 23 October.