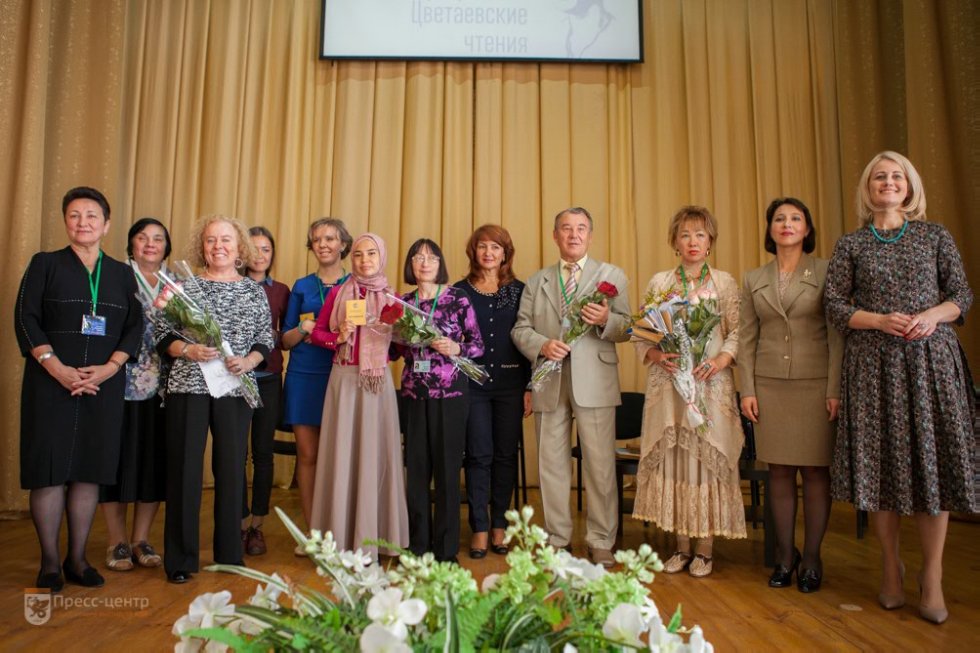 Honorary guests are Zulphia Sungatullina (Deputy Head of Elabuga Municipal District), Khairutdinova Diliya (Head of Professional Art and Artistic Education Division of the Ministry of Culture of the Republic of Tatarstan), Svetlana Vasilenko (the Board’s chef secretary of the Union of Russian Writers), Yuri Kublanovsky (the Union of Russian Writers’ co-chairman, poet, columnist, Corresponding Member of Academy of Russian Philology).

Elena Merzon (Director of Elabuga Institute of KFU) reminded the participants of International Tsvetaeva’s Conference about the history of this forum.

14 years ago, in 2002, I International Tsvetaeva’s Conference was opened in Elabuga Institute. Also the first Monument in Russia to Marina Tsvetaeva was erected and the unique memorial was made in Elabuga.

Ilshat Gafurov and Administration of Elabuga District understood the importance of historical and cultural components in development of town and district. Revival of cultural heritage began from Marina Tsvetaeva. The idea of M. Tsvetaeva’s Memorial was originated in scientific world of Elabuga Institute and the Elabuga State Historical and Architectural and Art Open Air Museum. They got historians, architects, sculptures and cultural workers to take part in this event.

Specialists in study of literature in Elabuga Institute turned to Tsvetaeva’s theme in the end of 1960s. Thereafter the information about Tsvetaeva’s residence was collected. August 31st became the day when annual Poet’s Memorial Days were held in Petropavlovskoe cemetery. It was read lectures at schools, published the publications in such newspapers as “Novaya Kama”, “Sovetskaya Tataria” and magazine “Selskaya Molodezh”.

In 1980 the first in Russia memorial tablet was placed on the house where the poet spent her last days. This time the fist scientific publications were printed and scientific contacts were got in touch with specialists of metropolitan universities and cultural institutions.

At present Tsvetaeva’s Conference is a competitive forum in scientific world gathering more than 100 specialists, researchers, writers, poets and translators. The specialists from more than 20 countries took part in the Conference.

Literary prize named after Marina Tsvetaeva was established in 2006 to keep the best Russian cultural traditions and perpetuation of Poet’s name. Prize is presented according to 3 nominations. Over the years more than 20 specialists in study of literature, poets, museum workers and cultural workers were awarded. The presentation of VI Literary Prize named after Marina Tsvetaeva took place in the context of opening of VIII International Tsvetaeva’s Conference.

Ekaterina Lubyannikova (Saint Petersburg) became the winner of “Tsvetaeva’s Memorial” nomination for considerable contribution to perpetuation the Tsvetaevs’ memory (publishing, the edition of monograph and the public appearance).

Reyes Garcia Burdeos (Castelion, Spain) was awarded at “Poetic Collection” nomination (Tsvetaeva’s poems, prose and epistolary works’ translations into others languages of the world) for important contribution to popularization Marina Tsvetaeva’s works abroad. For many years Reyes Garcia Burdeos (Doctor of Philology) had been working as a teacher of Russian at official language school in Castelion.

In 2012 Kazan (Volga Region) Federal University originated the Contest of Students’ Works about Marina Tsvetaeva’s works. Over the years 11 students of our University have become the winners of the Contest.

This year winners are:

Karina Usmanova says that researcher of Tsvetaeva’s heritage always finds something new for himself. Karina Usmanova’s work concerned grammatical markers as ways for des­cription of emotional experiences and appraisals in poet’s works.

More than 100 scientists and specialists from Russian Federation, the near abroad countries and foreign countries (the USA, Canada, France, etc.), actors, musicians, poets, biographers have become the participants of the Conference.

The researchers’ repots in several areas were heard at the forum:

The forum was held in the context of Year of Movie in Russia. Among the participants of Conference were famous actors and poets whose works were closely connected to the great poet’s name of XX century. Among of them were Irina Rerig (director, s­cript writer), Antonina Kuznetsova (actress of Russian Federation), Tatiana Gorchakova (actress of Moscow theatre “111” named after P.M. Ershov).

Cultural program was programmed: demonstrations and discussions of documentaries, literary salons. Excursions in Elabuga with visiting the Elabuga State Historical and Architectural and Art Open Air Museum, the Museum of History of Elabuga Institute of KFU, Tsvetaeva’s places and art exhibitions were organized for guests and participants of the Conference.

Forum began from Tatiana Gorchakova’s one-man show “I Don’t Know What To Do With My Love…” on September 5th. Antonina Kuznetsova (actress of Russian Federation) – the Conference’s constant participant - introduced to the guests of forum the great poetess’ work on September 6th.

In the evening the guests watched and discussed documentary “Three Heroines Searching For Homeland” by Irina Rerig (Germany).

Source of information: Ekaterina Saibel, the press service of Elabuga Institute of KFU