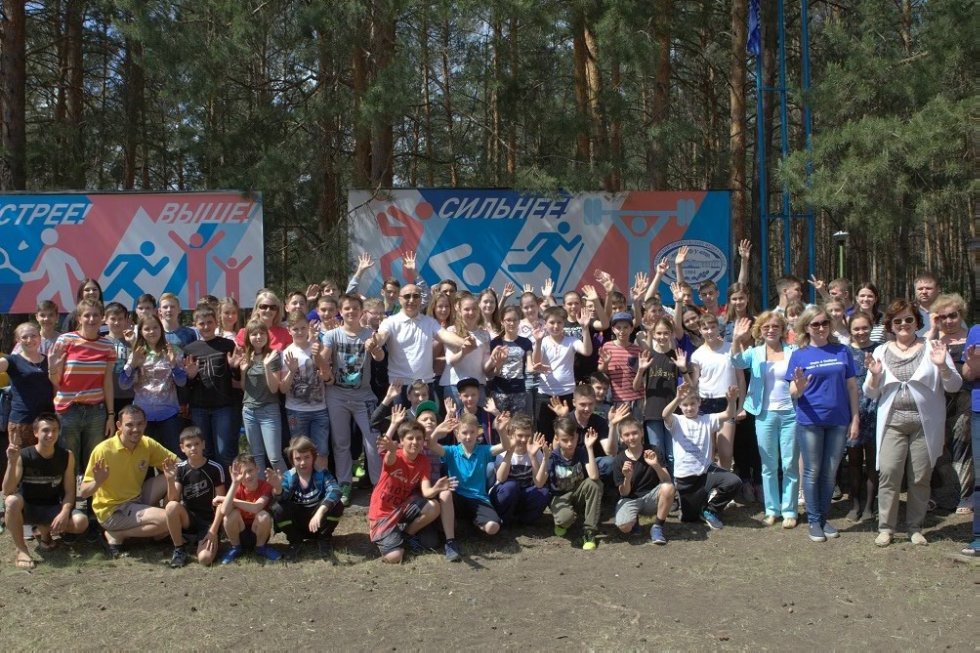 The opening ceremony was attended by the rector of Kazan Federal University Ilshat Gafurov.

Elabuga Institute of KFU traditionally organize a camp session for lycee pupils. This year, 80 pupils of Lobachevsky Lycee of KFU and IT-lycee rest in the sports camp "Burevestnik" from 2 to 19th of June. Rich educational programs on information science, mathematics, robotics technology, the English and Russian languages will be suggested for children. Some entertainment and wellness programs will also be organized for the participants of the session: disco evenings, intellectual competitions, sports games, quests, and etc.

The camp invites lycee pupils for the second time already. And the children who came here for the second time, noticed the changes the camp has undergone: new comfortable houses, showers, a modern sports ground, a beach appeared in the camp.

Aidarbek Husaenov, a volunteer of the session: "Having come here again I paid attention to the changes in the camp: it became more comfortable! Last year I visited "Burevestnik" as a listener, a student, but this year I am going to conduct classes on sports programming. It will be very useful for me in future, and I am grateful to the session organizers for such an opportunity - to combine a summer holiday and studies. "

According to the curators of the session, such kind of work is a great tool for the education and health improvement of young people.

"Pure air," Shishkin’s" pines, a beautiful lake, cozy houses, a dining room ... If I was a child, I certainly would like to come here again and again, - says an adviser of Kazan Federal University rector in pre-university, general and teacher education Lyudmila Nugumanova. – The fact that children are under the supervision of experienced KFU professors is very important for me as a parent! KFU pays great attention to the organization of such profile sessions, as the process of communication between the pupils and the University teachers promote love and respect of children for our high school establishment, we do our best to educate them in the traditions of the former Imperial University."

The session activists demonstrated for the guests the classrooms for lessons in computer science, robotics, and art design. The children told the rector how they spend their time and showed some creative numbers prepared for the holiday. Volleyball competition for the Cup of the KFU rector took place on the new playground. Ilshat Gafurov underlined that Kazan Federal University has always set the task to educate not only a clever, but also healthy generation of young people. "Our university is constantly being renovated - said Ilshat Rafkatovich. - The first step was to up­date research laboratories and educational campuses, then - the improvement of social infrastructure. The next stage is to up­date recreation facilities for the students, the teaching staff, and for the younger members of our university family, e.i. lycee pupils. The studies at the University is not so easy and you need to be healthy in order to move forward, gaining new knowledge. In order to achieve optimal economic effect, we want "Burevestnik" to be opened all year round: in winter you can go skiing, sledging and skating, a hockey court is to be built. Our staff and students will be able to come here for a week or weekend to forget all the difficulties of the working week, to rest and gain new strength. "

According to the director of Yelabuga Institute of KFU Elena Merzon, the Institute staff have been preparing for the summer season in "Burevestnik" for several months: next to the lycee pupils students of Elabuga Institute of KFU will come to the camp to restore their strength after the examinations, the participants of various math schools will come here during the first two summer months. In August, "Burevestnik" will house the Republican Summer Physical and Mathematical School for pupils of 8-10 grades of secondary schools. The school program includes practical hours to solve problems of advanced level, popular science lectures by leading foreign and Russian scientists, teachers of Elabuga Institute of KFU, seminars, laboratory work, creative competitions, research design. In the framework of the International Festival of School Teachers the Summer School of Education session will take place in the camp. Such sessions will be held for the first time this year. The moderators of the festival will participate in this project.

Source of information: Source: Catherine Saibel, the press service of the Elabuga Institute of KFU