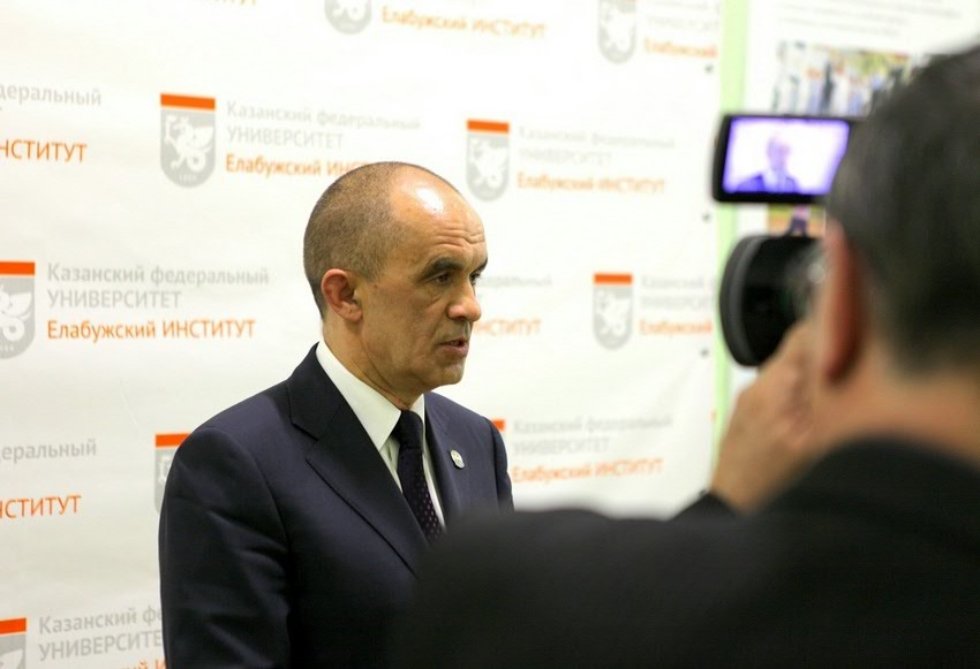 Elabuga Institute is an Advanced Post of Teacher’s Training Education

The representatives of the Ministry of Education and Science of Tatarstan, Elabuga Institute of KFU and municipal authority of the regions of Tatarstan discussed different issues at the meeting of the School Board.

Elena Merzon, Director of Elabuga Institute of KFU, gave her report devoted to the main activity characteristics of the institute during 2015 and the projects being worked out by the teaching staff.

One of the most important projects of the institute, which was finished in 2015, is considered to be the State Contract of the Ministry of Education and Science of Tatarstan “Intensification of Practice-Oriented Training of Future Teachers Who Graduate the University with the Bachelor’s Degree on “Teacher’s Training Education”. The results were announced by Professor Vladislav Vinogradov

The ideas of enhancing the educational level of students offered by E. Merzon, were approved by the representatives of the School Board.According to Angel Fatakhov, Elabuga Institute justifies hopes providing Tatarstan with highly-qualified teachers. He promised that the innovative projects offered by the institute are going to be supported by the Ministry of Education and Science of Tatarstan. Among these projects are “The International Forum of Makhmutov”, “The International Festival of School Teachers”, and others.

The Minister of Education and Science of Tatarstan strongly recommended the Teacher’s Training College Directors of Menzelinsk, Nizhnekamsk and Naberezhnie Chelny to communicate with Elabuga Institute of KFU since nowadays teachers are required to have a Higher Education Diploma and the qualification of the 6th level. Those who presented at the meeting showed their interest in further collaboration and expressed their gratitude towards the institute authority and staff for seminars for teachers and the opportunity to take part in different forums organized by the institute for teachers and their students. By the way, a department of Chemistry and Biology was opened at the institute 2 years ago. It shows schools need teachers of Chemistry and Biology. Many school and college directors found the project “Applied Pedagogics” very interesting.

Talking to the representatives of the municipal authority, E. Merzon offered to examine an opportunity to use the system of municipal crediting for the employees of the educational institutions.

In return the Region Heads offered E. Merzon to organize in the institute the Tatar language courses for the Tatars living in different regions of the Russian Federation. It seems to be very important for these people to keep their culture, traditions and mother tongue.

E. Merzon also noted that the innovative projects also included teachers’ tuition. She also stressed the problem that does exist and should be solved. There is no any magistracy for new qualifications. She also pointed out that even if it was opened, it would not be free of charge. Angel Fatakhov, Minister of Education and Science of Tatarstan, supported the idea of financing the project with the help of the program “Algarish”.

The First Pro-rector of KFU Riyaz Minzaripov pointed out that Elabuga Institute had done a lot in solving this problem. He said, ‘Elabuga Institute is an advanced post of teacher’s training education in the eastern part of Russia. On behalf of the Rector of KFU I wish the teaching staff good luck in their further work’.

At the end of the meeting Airat Kaviev, Deputy Director, was awarded with a Honorary Diploma by the Minister of Education and Science of Tatarstan. March 1 in Elabuga Institute KFU started one of the most long-awaited and favorite festivals - "Student spring festival-2016". On the first competition day of selection tour students of Biology Faculty, Psychology and Pedagogy Faculty, and also team of Physical Culture Faculty have stepped on the stage.

It will become clear who actually wants to become "superstar" of institute and will manage to present worthily its faculty on a scene, and then the higher education institution – on "Student spring festival" of KFU.

Until the end of the week participants of action should show the talents in five directions – dances, a vocal, an original genre, theater and even journalism.

We present you the first festival sketch which was prepared by the students of Biology faculty:

"It sounds from the scene: "Biology faculty is invited!". There is no place to recede. There is a fight of "titans" on the scene: Daut and Damir. Hope and support of faculty, who is the best? Both are the best! and in what naughty maiden environment!.. Applause, shouts of fans accompany each our number. Frames of favorite Soviet movies in processing of "Biology-pictures" have given pleasure to all hall, the laughter didn't stop for a long time. Incendiary Ukrainian dance, the lyrical song performed by Gumirova Alina and Khabibulina Albina didn't leave anyone indifferent.

After performance we, tired, but absolutely happy organize a final photo session. Sleepless nights, daily rehearsals, vanity, small disputes which haven't resisted under force of the commonwealth of all participants have ended and as a result have rallied us even more. For this purpose "Student spring festival" is need!

Source of information: the press Service of Elabuga Institute KFU. Such indicators as articles in the Russian journals entering the list of High Attestation Commission and in the foreign reviewed journals (and also a cumulative rating of these journals), monographs, participation in grants, the number of patents, Hirsh's index, etc. were estimated.

Vladimir Vasilyev is engaged in research in the field of regional economy and economic security. He has finished his work on the Russian Foundation for Humanitarian Research grant "Research of investment appeal of the region in the context of increasing of its economic security" recently. The result of the work on this project became 1 article in Scopus journal and 8 – in the journals of High Attestation Commission, and also the monograph on this subject.

"Economic history and economic management system" is a subject of scientific researches of Almaz Gapsalamov. For last 5 years the young scientist has published 3 monographs, he has publications in Scopus (4) and High Attestation Commission (19) journals.

Our scientists consider the chosen subjects are very actual and a little studied and are eager to continue researches, today they are preparing materials and all necessary documents for the registration of the application for Russian Science Foundation grant in September, 2016.

The staff of Elabuga Institute KFU congratulates teachers with this deserved victory and wishes them further success!

KFU Pedagogical Innovations are recognized as the best

The project of Elabuga Institute of KFU has won the International Competition "The introduction of innovative technologies into the educational process of educational institution." The event was held by the business school "Capital" for the purpose of identifying and popularizeing of teachers’ innovative experience in Russia and in the world. Teachers of educational institutions, students of universities participated in the competition.

The project of Elabuga Institute laboratory "Innovative technologies in the field of multicultural education" has won the competition. Ekaterina Kudryavtseva, Ph.D., director of the International Laboratory presented the report "Calendar Portfolio of a preschooler as an innovative technology in the psycho-pedagogical support of a child and family: from the creation of a competence individual route to identification of signs of giftedness".

It should be mentioned that the "Calendar Portfolio of a preschooler" is focused on independent performance of tasks by a 5-6 years old child in the process of preparation for a school, on self-testing and guiding by adult members of the educational community. The Calendar Portfolio of a bilingual child is aimed at the individualization of the educational process, which is considered as a sequence of mini-results, the development of pupils’ motivation to research activity accompanied with self-control (self-testing) of pupils in the process of non-formal education.