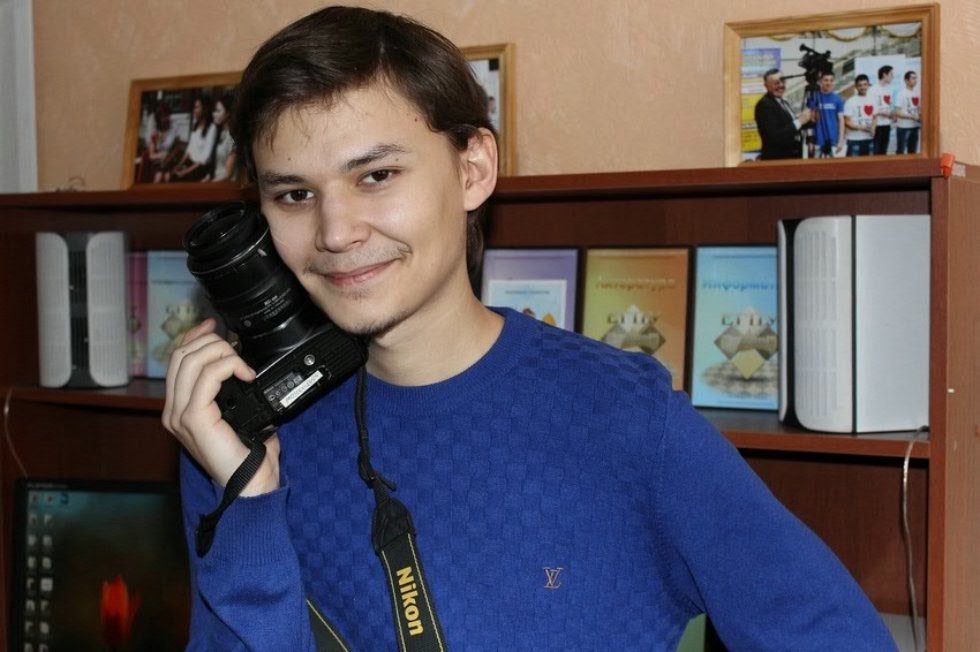 The competition was attended by students coming to study in Russian universities from Jordan, China, Vietnam, Brazil, France, Peru, Iran, Colombia and other countries.

A webcast of V online - festival of friendship "IN THE WORLD OF RUSSIAN LITERATURE " has been held in Yelabuga Institute of KFU recently. It is annually organized by the administration of career guidance and work with talented youth of Moscow State University, named after M.V .Lomonosov for foreign students of natural faculties of the Faculty of Philology.

Elabuga Institute of KFU was represented on this festival by Sardor Hairiev (Uzbekistan), a first year student of the Faculty of Russian Philology and Journalism. Sardor has successfully coped with the task of a qualifying stage and went into the final round, due to the results of which was the winner of the festival. In assessing the creative works, members of the jury took into account the level of knowledge of the Russian language, the originality of interpretation and the ability to move away from the standard approach to the subject.

"To participate in the qualifying stage, it was necessary to write an essay on one of the topics offered by the organizing committee. - Sardor says, - I have chosen "Russian literature on the stage and on the screen." In the final stage the participants were asked to send to the organizing committee a video of his speech. It was supposed to be a recitation of a poem or prose passage, musical composition or the Russian staging of literary works. With the help of my friends in the TV studio of the Institute were shot and edited a video on the work of Vasily Shukshin "Story". As it turned out, Sardor perfectly speaks several languages. "I am from Uzbekistan, but I am Tatar. At home we speak Tatar, Uzbek and Russian languages. I like Russian language for its rich vocabulary, being colorful and expressive. I think many foreigners read the Russian classics in Russian to experience all the beauty of the presentation and perception of what the authors describe. I started to study the Russian language in high school and am very good at it now. I enthusiastically read the works of Russian literature, and most of all I like such poets as Lermontov, Yesenin, love to read Blok, Bulgakov, Tolstoy. All this determined my choice of university and faculty. I became interested in journalism about 3 years ago, I tried to write articles and was directly involved in this exciting process at home. In the future, I plan to become a radio personality, and become a competent expert, who can correctly and clearly express his thoughts, I am sure my mentors-teachers in high school will help me. "

According to the dean of the Faculty of Russian Philology and journalism Elmira Ibragimova, the support of talented young people is one of the priority directions of the faculty. In this regard, the Faculty launched the project "The Firebird", the task of which is to involve students in activities that contribute to the development of their creative potential. Sardor’s participation in the festival is the first step in the development of this project.

Source: Catherine Saibel, the press service of the Elabuga Institute of KFU Yelabuga Institute of KFU gets a new logo

With the change of the brand of the Kazan Federal University symbols of Elabuga Institute has transformed.

The constant promotion of the university in the world scientific and educational space has identified the need to change the logo of the Kazan Federal University. At the end of the last year the new logo was presented by Vice-Rector for Economic and Strategic Development of KFU Marat Safiullin. "We are involved in the program to improve the competitiveness, and one of the recommendations of the Ministry of Education and Science of Russia, the International Scientific Council – updating the brand of KFU", - informs the press-service of the university.

Now, the new logo is an image of Zilant, holding in his paw a torch - a symbol of enlightenment. The new logo will be the epitome of the academic status of the university, its rich tradition and long history. Zilant itself determines the location of the university. (According to ancient legend Zilant dwelt on the mountain near the mouth of the Kazanka River, where it empties into the Volga. In the legends of the ancient Bulgars dragon Zilant symbolized a sharp mind and immortality. It is often served as a talisman image for warriors).

The logos of the structural units of KFU has changed together with the basic symbols of the university. Now, each institute has its own color palette. So, the emblem of Yelabuga Institute of KFU will be presented in three colors: the base - blue, the basic (color of the direction) - gray and an additional (the color of the institute) - orange.

Source: Dinara Almagambetova, the press service of the Elabuga Institute of KFU Tatyana Rolich, the member of the Russian Union of writers, the niece of Vera Ivanovna Stakheeva, G. F. Stakheeva’s daughter-in-law, donated the picture "N. D. Stakheev's Estate in Alushta" to the institute.

This picture was painted by Tatyana Viktorovna's daughter, Ekaterina Rolich in 2013.

On the VII International Stakheev readings which took place in November, 2015 there were four descendants of a nice merchant family. Owing to objective circumstances Tatyana Rolich couldn't take part in the conference, but nevertheless she didn't stand aside and sent to the higher education institution articles for the publication in the Stakheev readings digest. She also sent her daughter's picture.

On a canvas there is Nikolay Dmitriyevich Stakheev's country house in Alushta (Crimea). Nowadays it is one of the city sightseeings where the Center of children's creativity is situated

The project of a country house and the park adjoining to it was created by the well-known architect, a resident of Yalta, academician P. Krasnov at the end of the XIX century. This building is remarkable not only for the history and architecture, but also for trees located there, which are more than 300 years old. Innovative projects of scientists of Yelabuga institute of KFU are among the best!

The projects developed by the staff of the International laboratory with the distributed participation called "Innovative technologies in the sphere of polycultural education" of KFU Yelabuga institute are placed on a portal of the best practical works of Russian education - on the Institute’s site "EUREKA", which deals with problems of educational policy.

On this site the materials aimed to providing continuity of preschool, school and high school education and regular psychological and pedagogical support of bilingual children in "a triangle of mutual integrity" of a kindergarten / school - a family - the society/centers of additional education are presented. This year, the students of different faculties have had the training at the same time. According to the researcher of the Institute of Foreign Languages ​​and Media Technologies at Greifswald University, the head of the International Laboratory with distributed participation of Elabuga Institute of KFU Ekaterina Kudryavtseva, who led the work of interns, it should strengthen the interaction inside the university and facilitate the implementation of laboratory tasks "Innovative technologies in the field of multicultural education" not only as a network - at the international level, but also as a distributed - at the level of the university. The student internship program consisted of research (collection of material on the Internet, interviews, etc.) and practical activities on testing and implementation of developing teaching materials for pre-school children.

Tatiana Vlasova, the 3rd year student of the Faculty of History and Law explores the theme of "Russian Germans - a nation in exile (emigration)" (the head, the candidate of historical sciences, associate professor of general and national history - Irina Kropotkina).

During the program, supported by the Russian Association of Germans Vira e.V. and personally, Ms. Ella Kuhl based on a questionnaire created by the laboratory staff within the project RGNF "A Nation is at migration" she had a telephone interview with the Russian Germans of pre-war and post-war generations. She interviewed the Germans, who reemigrated from the USSR to Germany in the 1990s. and before the deportation to Kazakhstan and to the north of the Russian Federation, living in the Volga regions.

PC Ikarus (IKaRuS eV) donated publications of the beginning of XX century and modern books, touching on migration issues of Russian Germans in the 19-20 centuries, their integration into Russia / the USSR and new Germany, and their perception of the Russian reality, since the 19th century in Elabuga Institute library.

The student-technologistl Alsu Nazmutdinova is working on the project "Manufacturing of products and work fixation methods in the framework of the joint work in the laboratory of subject-developing medium pre-school education", her head is the candidate of pedagogic sciences. associate professor of theory and methodology of professional education Lilia Latipova.

With the support of the Protestant kindergarten "Rainbow" (evang. Kita "Regenbogen") in Guestrow her thematic materials focused on color perception, concentration, fine motor and aesthetic perception. In addition, the historical and didactic base of work with soft books and soft puzzles were investigated, the features, advantages and soft books disadvantages for girls "My day / My House" and soft puzzles "Animals Zoo " aimed at the development of speech, tactile perception, visual perception, logical thinking, etc. were tested, studied, discussed and documented for future practice and the scientific activities.

As a result of this work she is supposed to write a scientific paper in the journal Scopus base, as well as the development of " Teacher technologist PSE portfolio for every day," including various templates for the production of thematic handicrafts made of scrap materials by 4-6 year kids in PSE or with parents (elementary and advanced level of difficulty). These templates, on the idea of ​​the author, will greatly facilitate the work of teachers.

The 4th year student of the Faculty of Russian Philology and Journalism, Julia Sofronova is working simultaneously on two themes - "Calendar - portfolio" as technology in the psycho-pedagogical background of a preschooler "and " the tatar ethno-cultural component of the calendar portfolio for preschoolers with Russian-Tatar bilingualism "( the head - the candidate of philology, associate professor of Russian and contrastive linguistics Yulia Danilova).

In the view of the fact that Elabuga Institute of KFU has become the founder of several major international projects (including the conference "Multilingualism and Intercultural Communications: Challenges of the 21st Century" at the University of Pula) this year, Julia, participating in the internship program for the students of Elabuga Institute in Germany for the second time, she received a short-term training on the theme "Management of the educational project" and participated in the development of the conference program in the city of Pula. In addition, according to the results of last year's internship, she received a copy of the author's "Calendar Portfolio preschooler," on which she wants to write a Tatar-speaking version. During this internship the girl was trained conducting game trainings with a games library "Children of the World." Julia is going to demonstrate her expertise in this area at the International Week of multilingualism in Udmurt State University (Izhevsk), 29 February - 3 March, where she will conduct the play master classes for students and teachers.

Making friends in the foreign training the girls returned armed with an ambitious ideas: to complete their projects successfully and realize them in practice.