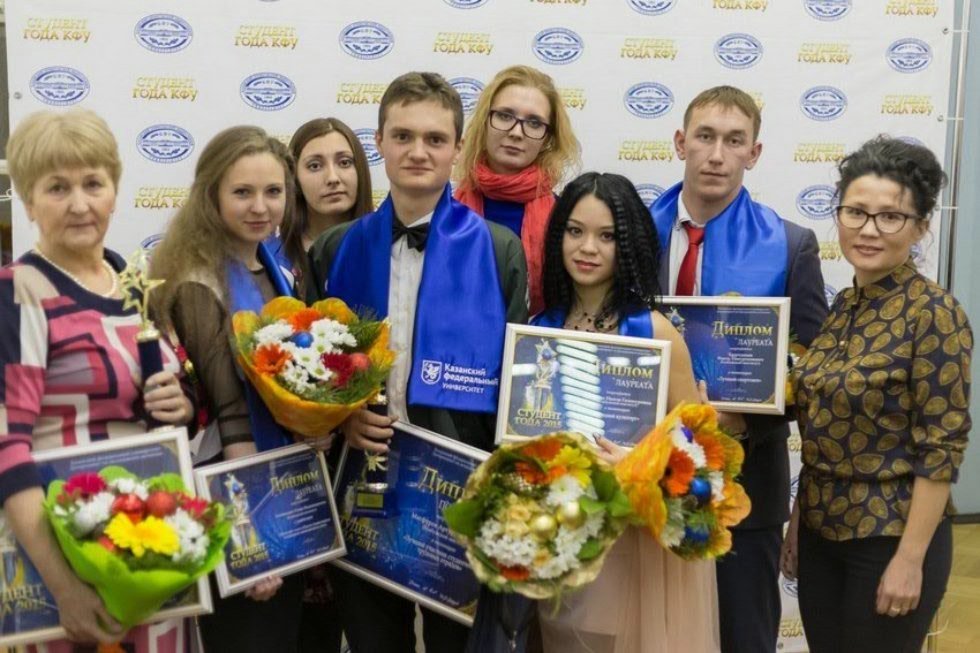 On the 16th of December in the imperial (assembly) hall of the Kazan federal university (Kazan) celebration of winners and laureates of the competition "Student of the Year — 2015" took place.

This action traditionally takes place with the assistance of the rector of KFU Ilshat Gafurov who, welcoming participants, noted the high level of training of students, growing from year to year indicators of their activity in scientific and public work, that pleases undoubtedly.

We will remind that under the terms of competition at selection of finalists achievements of students on different activities were considered: participation in university, city, republican, All-Russian, international actions, interaction with public organizations, government institutions, existence of certificates/diplomas about professional development, passing of master classes, the training programs. Tasks of competition assumed also disclosure of leadership skills of participants.

Among awarded on the mentioned arrangement are students of the KFU Yelabuga institute.

Artur Magfurov, the student of faculty of history and law became the winner in the nomination "The Best Participant of Students’ Labour Brigade".

"As a member of students’ labor brigades I work the third year – Artur tells, - a lot of knowledge, abilities are accumulated, I went to trips on the meetings, sports contests held in all parts of the country. Among our victories in the current year are: the 1st place in the Republican sports contest among Students’ labor brigades in an all-team competition (February, 2015, Kazan), the 1st place in the municipal intellectual game "Go ahead, Girls" (March, 2015, Elabuga). I consider that we created very strong team.

For me the victory in this nomination means recognition of success and result of the work which is carried out by me and my team within 3 years. Up to the last moment I didn't believe that I would win, after all other applicants were also very strong. The next year will become final for me as a member of SLB, that’s why it is necessary to do the best, to form successfully operating headquarters of students’ groups of the KFU Elabuga institute!"

Four more students of our institute won a rank of winners of competition.

During the arrangement also the best teachers-tutors of higher education institution were marked out. Rosalia Minnullina, the candidate of pedagogical sciences, the associate professor, the deputy dean of faculty of the Tatar and comparative philology on educational work of the KFU Elabuga institute became a winner in the nomination "The Best Teacher-tutor"

"Preparing for this action, I didn't think of results, – Rosalia Faizovna says, - First of all I thought about the best way of showing my work, after all I felt great responsibility of presenting the institute. The attention of the management of higher education institution which supports me is pleasant and exchange of experience with colleagues which happens during passing of stages of competition is useful. And I love to work with students.

I advise young teachers to try their forces in similar competitions. As it is a good opportunity to check themselves: who they are and what they are capable of; opportunity to see who works near you; opportunity to feel like a part of a huge great higher education institution of the Kazan federal university".

All winners and laureates of competition were handed diplomas and presents. The sketch of an assistant professor of mathematical analysis, algebra and geometry Mansur Gilmullin was published in the edition of "Teacher of Mathematics."

The essay provides brief biographical information, information about the main scientific works, directions of scientific activity. The inclusion in a digest of articles of the scientist is not accidental, Mansur Fayzrahmanovich is the constant participant of the international seminar of teachers of mathematics under the guidance of AG Mordkovich, whom, in an whole, this book is dedicated.

Mansur Fayzrahmanovich was one of the organizers of the seminar in Elabuga in 1994 and 2011.

It should be noted that Mansur Gilmullin turned 65 this year, 40 of them are connected with the work of the institute in Elabuga. Mansur Fayzrahmanovich is the supervisor of the Summer School of Mathematics and Physics Elabuga Institute of KFU, the teacher of «Children's University", organizer of conferences for math teachers and students in different regions of the republic, he is preparing students for the exam in mathematics. Mansur Gilmullin conducts active scientific work for the last five years he has been working in two directions: Formation of cultural and historical environment of teaching mathematics in schools and universities (published 30 articles, including the one in Scopus) ; Formation of readiness for labor activities of bachelors of teacher training (3 articles are published in the proceedings of international conferences, 2 articles are in print in the Scopus magazines).

The reference bibliographic edition "Teachers in Mathematics" is devoted primarily to those representatives of the professional community of mathematicians who are investigating the problems of teaching mathematics in schools and universities. The authors write: "... this book gives the opportunity to get acquainted with scientific and pedagogical activity of teachers of mathematics and computer science. We wanted to tell who is who, it is - Pedagogical WORLD! ".

The work contains 114 essays as about the teachers of mathematics of the 19th and 20th centuries and contemporary representatives of various techniques and mathematical scientific schools and cities of Russia. It is possible to become acquainted with the masters of pedagogy of mathematics, as well as with young promising educationalists according to this unique material

Experts of KFU: "If you want to cope with aggression, play dolls" The problem of control over aggression manifestations has always been and remains one of the most important. Unlike animals, aggression is regulated by instinct, people are able to cruel behavior consciously.

According to the report prepared by Institute of sociology of the Russian Academy of Sciences, in recent years teenagers began a thicket to take alcohol, to show aggression, to commit crimes. Polls "difficult" and the usual teenagers high school students, their parents and teachers in several Russian cities found that among students in grades 10-11, almost half (48%) have experience of participation in fights (the same as indicated in their responses to 21% of 7- 9-graders, that is, every fifth of teenagers). What is vandalism, can say with full knowledge of the facts and personal experience 43% of high school students and every tenth person with "incomplete secondary". Every fifth senior made small thefts from stores. And still very speaking figures: 14% of the senior school students and 2% of 7-9 graders put a tick in the line "beating with group of the person", 2% of seniors and 5% of 7-9 graders admitted to sociologists that made theft of a purse or handbag, stole others bicycle or the scooter, stole something from someone else's car.

The leading expert of the Center of Psychological Assistance of educational process of the KFU Elabuga institute, the candidate of pedagogical sciences, associate professor Irina Talysheva offers the unusual, but gaining popularity way of fight against a stress and aggression – the doll therapy.

Doll therapy is a method of psychological correction of various states by means of dolls, and also diagnosing of internal problems of the person. During training on the doll therapy the history is played by persons connected with the injuring conflict situation.

It has already been several studies at the Center of Psychological Assistance, which were attended by the students of the Faculty of Psychology and Education and the Faculty of Engineering and Technology. "Classes are held in groups of no more than 15 the number of people," says Irina Anatolyevna. – Students approach the doll choice responsibly, playing with it, the student projects the reality surrounding it, broadcasts nature of relationship with other people. The doll has to be associated with the young man. Application of the doll therapy, first of all, will allow to reveal and correct in a game situation specific psychological problems of the person".

There are three stages of the doll therapy:

The first stage of work begins with contact establishment. This stage is very important as with a support on it there is an emotional disclosure in the course of a choice of the doll and therapeutic work to it. All further cooperation depends on it. It is possible to discuss the questions concerning interests of the student, problems which excite him.

The third stage is final conversation, questions to the participant of occupation, a direct out gaming of any situation with use of the made doll, summing up.

According to Irina Talysheva, youth shouldn't confuse that game in dolls is considered children's occupation. "Since the childhood these or those situations learn to stage us, children through game show the attitude to reality. And at more adult age: we seek to operate or sponsor, control and represent ourselves in various situations. So why not to study it on dolls?", considers Irina Anatolyevna.

Source of information: Dinara Almagambetova, the press Service of Elabuga

An Economist or a Person Who Flips Penguins Before the classes started the children had taken part in a Ney Year performance. They danced with Ded Moroz (Russian Santa Claus) and Snegurochka (his granddaughter), declaimed poems, solved riddles and received New Year presents.

At the same time in the University hall all visitors could attend an exhibition of hand-made articles devoted to the festival of Ney Year. The children had brought Ney Year decoration, souvenirs and small Ney Year tress they had made themselves.

The first class for the children was delivered by Olga V. Shatunova, docent of the Faculty of Engineering Preparation. She told them about the most important and interesting professions. The children were definitely absorbed into listening to the teacher and hen the lecture was over they asked her lots of questions. They discussed what a snake’s poison collector is for and if the profession of a penguin flipper is useful.

The next lecture was devoted to limericks. The senior teacher of the Department of Cross-cultural Communication Alevtina L. Kormiltseva told the children that a limerick is a form of a very short poem. It appeared in the United Kingdom and its aim is to turn nonsense to advantage. Traditionally a limerick consists of five lines. The first one should have a rhythm with the second and fifth lines while the third line has a rhythm with the fourth one. The first line tells a reader about a character, who he is and where he is from. The second line is devoted to what he has done or what has happened to him. The further lines tell the end of the story. The first book of limericks was published in England in 1821. ‘The Book of Nonsense’ written by Edward Leer (1846) was translated into the majority of the languages and made a start for the so-called Literature of Nonsense. The students of the Faculty of Foreign Languages prepared small performances based on limericks. They also helped the children to learn some of them.

At that time the childrens’ parents were involved into a lecture prepared by Khene R. Barieva, junior lecturer of the Department of Education. It was devoted to the problem of children’s creativity. The teacher told the parents what types of exercises can be used to develop creativity. For example, doing sport with a child you can develop many qualities including creativity. While running or jumping you can ask a child to run like an angry hippopotamus or to jump like a happy orange!

Dmitriy Sheronov shared his impressions of the class:

- The parents have learn a lot of important information. As for me, I have understood that children’s creativity should be developed and it is possible to do. The majority of the exercises can be used while you are taking the child to school or you are doing shopping together.

When the lectures were over the children were divided into groups and had practical classes. They were taught how to make Ney Year decoration and souvenirs, they created cartoons and games.