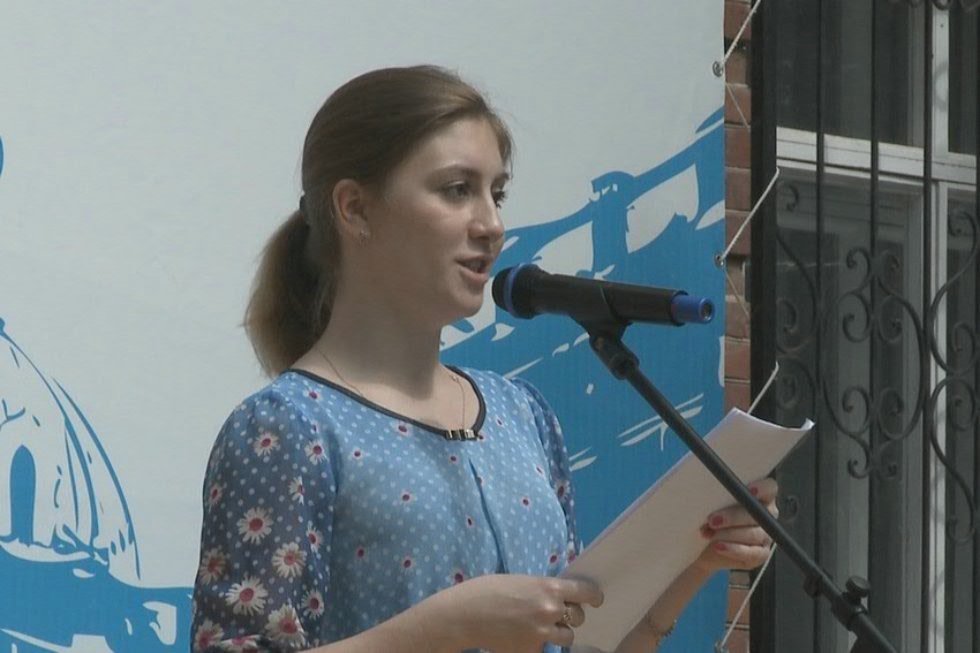 June 4, on the eve of the birthday of the great Russian poet Alexander Pushkin Elabuga Institute of KFU held a poetry festival.

This year the event is timed to the Year of literature in Russia.

On the area of ​​the main building of the University students, as well as Festival guests recited poems by Pushkin, Balmont, Nekrasov Esenin not only in Russian but also Tatar, English and German.

According to the organizers, who are the teachers of the Faculty of Russian philology and journalism, such events are carried out in our Institute is not for the first time and they always attract a wide audience.

"The peculiarity of today's feast, - says Anton Bykov, associate professor of Russian and foreign literature department of Elabuga Institute of KFU – is that the participants declared not only poems by Pushkin, but many other outstanding poets. The main goal that we set for ourselves was to convey to the public the beauty of Russian literature and we hope that all those present liked our performance”.
For details see::http://kpfu.ru/elabuga/poeticheskij-prazdnik-sostoyalsya-132296.html The urgent need is to learn to hear each other

"Russian as a native, non-native, one of the native and foreign: questions of terminology, and proficiency testing" - that is the title of the article by Ekaterina Kudryavtseva (PhD, researcher at the ╚Institute of Foreign Languages and Media of the University of Greifswald, Germany) and Daniya Salimova (Professor, Faculty of Russian philology and journalism of Elabuga Institute of KFU).

According to the authors, the twenty-first century has brought with it the globalization of life and educational space. Global cataclysms - economic, political and natural - have led to an increase in the mobility of the world's population, not only in developed countries, but also the so-called Third World countries. When moving, people bring their own languages, cultures, knowledge and experience, their understanding of communication, intra- and intercultural to a new soil. "The Holy Science of hearing each other”, sung once Bulat Okudzhava, today becomes a pressing need, in everyday communication as well as in the world of science and education, in the real and virtual space.

As long as people learn popular foreign languages, minor dialects and languages often suffer as they do not possess a recognized status in the region, despite the quantitative and qualitative composition of their speakers, either native or foreign. But it is a matter relating to the policies.

"As part of the practical educational activities, - says Ekaterina Kudryavtseva - we are to address other questions. One of them, that often prevents both methodically competent organization of educational process and its monitoring of the intermediate and final evaluation (acquired competencies) - is a question of terminology. To be more exact, it is the question correlating the terminology adopted in Russia and in the world (mainly in Europe, the USA, and Israel)”. The article discusses the terms "Russian as a foreign language", "Russian as a non-native" and "Russian as one of the native / other native" (2L1), taking into account not only the areas and regions where they are spoken, but also the causes of inaccuracies that lie in the practice of communication and scientific research on bi- and multilingualism. June 15, 2015
We got the opportunity to learn German in Germany

Four students of the Faculty of Foreign Languages ​​of Elabuga Institute of KFU received an invitation to Germany.

Very soon students will be able to breathe freely after passing difficult credit tests and examinations, and take a break from studying. Still some of them will have to learn in summer. Four students of the Faculty of Foreign Languages ​​have been invited to come to Germany for the summer courses of the German language and culture in July - August. In order to participate in the competition of the German Academic Exchange Center (DAAD), students tool an exam on the German language, and prepared the necessary documents. Having successfully passed both stages of selection, students Elsa Burganova, Vasilina Kalashnikova, Yulia Makarova and Albina Sorokina are now preparing for the trip to Germany. Universities of Dresden, Heidelberg and Bonn will open their doors for our students for 4 weeks of the summer courses. Students will be given the opportunity not only to learn in the country where the German language is spoken (tuition and living expenses are paid by German hosts), but also to see the country, to travel and socialize with students from other countries. A student of the Faculty of Physical Culture of Elabuga Institute of KFU Anna Filimonova showed fine results being a member of the Russian team.

Our athlete won in the weight category up to 52 kg three gold medals - in the squat, bench press and triathlon, as well as the "bronze" in the deadlift and "silver" in the overall classification. But the main thing is that Anna set a world record in the triathlon - 372.5 kg.

According to the results of the competition The Junior women's national team of Russia won the 1st place in the team competition, the 2nd place is won by the United States, the 3rd – by Australia.

According to A. Filimonova, it is for the third time in a row that she has beaten her own record in the World competition "It's nice to know that there are no people equal to me in my weight class in the classic powerlifting, but I'm not going to stop here”. Despite the experience, she was greatly worried: "Although this is my 13th world championship, because of the burden of responsibility my feelings were as strong as ever: I represented our university!"

Ahead is World Powerlifting Championship which will be held in the Czech Republic in August. Anna Filimonova is the only athlete from Tatarstan in the Russian national team.

We congratulate Anna on this victory and wish her new achievements! The results of monitoring the effectiveness of the universities have been published recently on the website of the Ministry of Education and Science of the Russian Federation.

Ministry of Education and Science of Russian Federation completed the collection and validation of the data provided by educational institutions of higher education in the framework of key performance indicators for the universities in 2014. Such monitoring is carried out by the Ministry of Education and Science of the Russian Federation annually. In Tatarstan this procedure this year was held in 24 universities and 42 branches.

The results of audit show that Elabuga Institute of KFU performance in all the monitoring criteria exceeds the threshold.

In particular, one of the eight indicators is the average score of the exam admitting students to full-time education (64.63 points against the threshold of 60). Another important criterion is the total amount of research and experimental work - this is the funds raised by the university for research (in our institute, the figure is 81.27 thousand rubles per 1 unit of teaching staff against the threshold value of 70.1). The financial and economic activities of our Institute showed a 25% increase in comparison to the previous year. Today the organization's income from all sources per 1 employee amounted to 1,660,000 rubles the (threshold is 1,566 thousand rubles). For the first time such monitoring took into account the average salary of the teaching staff of the university. In Elabuga Institute, it is 156% relative to the average wage in the economy of the region. 65% of the teaching staff has scientific degrees of a Candidate of Science or Ph.D. The proportion of foreign students is 3.83% of the current contingent of students against the threshold of 1%.

Elabuga Institute of KFU takes leading positions in the direction of training "Education and Pedagogy" throughout the region, which is also reflected among the monitoring indicators.

According to Elena Merzon, director of Elabuga Institute, this audit allows educational institutions to better assess their place in the educational area, to compare their current performance with the previous one and assess its growth. "While only the strongest, status universities are left in the educational market, - says Elena Efimovna – one more confirmation of the effectiveness of the institution is a very significant event for us. In addition, in anticipation of the Entrance company – 2015 this is another pro for high school graduates and their parents in the selection of the institution to study at”.