'Curator, which charges for actions' 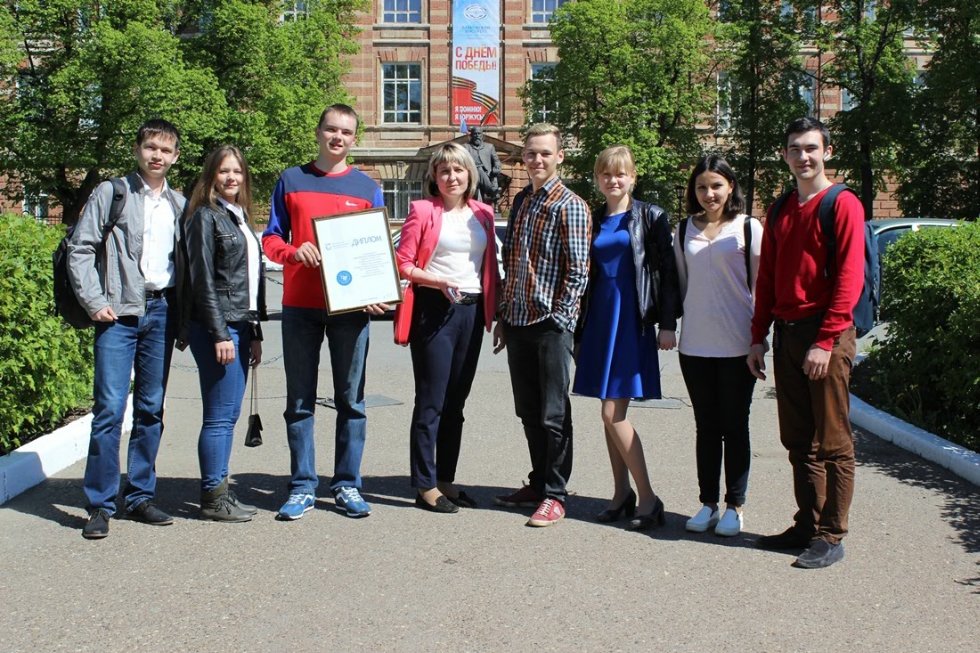 The mentor of 414’s group, the Faculty of history and jurisprudence of Elabuga Institute KFU Albina Garifzânova-diploma of the winner of the contest "Best curator of CFU-2016".

Traditional University competition of the best academic groups, chiefs, curators active in educational, scientific, and public life of the University has been passing for 10 years already. Awarding the five finalists of the contest, "The Best curator of academic group took place on 17th of May in Kazan. Among the best Associate, Professor of philosophy and sociology, curator of faculty of history and jurisprudence, of the 414’s group Albina Raisovna Garifzyanova. Albina Raisovna and 414 group’s students talked about their group and about how their preparing for the competition was held.

The first phase started in February of this year: all contestants were necessary to provide a portfolio of achievements, of students, and curator. Based on the results of this phase to the second phase of the competition, in absentia, of each unit were recommended for KFU by 5 contestants. "To take part in the contest invited Deputy Dean of the Faculty of history and jurisprudence on educational work Razilya Sajfullova. Especially Razilya Rauilovna helped to collect and arrange the portfolio" says Albina Raisovna..

In the internal phase, jury measured the performance of curators. Mentors, were to tell about group, that they supervise and about yourself: regular meetings with the student group counseling of students on issues related with the educational process, scientific research work, assistance in the preparation of activities, openness in communication with students, etc. Albina Raisovna, and students of the group approached this stage of the competition creatively: with the support of the senior students of the Faculty of history and jurisprudence they developed a s­cript for a video-comparison of bad and good curator.

According to the participants of the survey idea arouse quickly, and immediately was supported by everyone. Movie was matched to the subject of the contest. In the story the curator, who leads a healthy lifestyle, can successfully implement their plans confidently goes to his goal, easily copes with the difficulties and would incorporate the whole group exercise, eat healthy food, etc. "All crew work was organized thanks to the student of the Faculty of history and jurisprudence Aydar Dinmuhametovu. He also practiced in video-editing,"said Albina Raisovna.

Video curator 414 Group introduced in Kazan in mid-April. As the student of the history and jurisprudence of Zukhra Bikmuhametova says, who attended the speech as a fan address by Albina Raisovny differed of singularity. "It was noticeable that all Albina Raisovna is much closer to the students, she literally breathes with us in these student",-shared Zuhra.

After the victory of the curator, the students shared their impressions of the performances of his mentor, told the group. Student group 414 Maxim Kolchin noted that Albina Raisovna its energy causes the group to make progress and move forward towards your goals. "It energizes us to action. There is some kind of sincerity, which want to do science and to be active in public life, "says Maxim. Warden of group-Anastasiya Molochkova about the curator as a ' friend and mentor, who will be always able to listen to and give advice not only on a training activities, but also in normal, extracurricular life.

"What is Albina Raisovna? Proactive, attentive, indifferent. I was in a difficult life situation, and she said very important words: "everyone has the right to choose", I then have a conversation with her helped me and now I follow this rule. Seemingly, the curator should not engage in our mental state, and it remains to us is always attentive, "says student group 414 Alexander Nikolaev. And Ilya Kaishev noted that pairs Albina Raisovny always interesting. "This is no ordinary lectures and seminars, it's always informative classes where the teacher wants to listen and "catch" his every word.”

We congratulate students and curators with their win! We wish to al groups success in following contests.