New sides of the birds' keeper 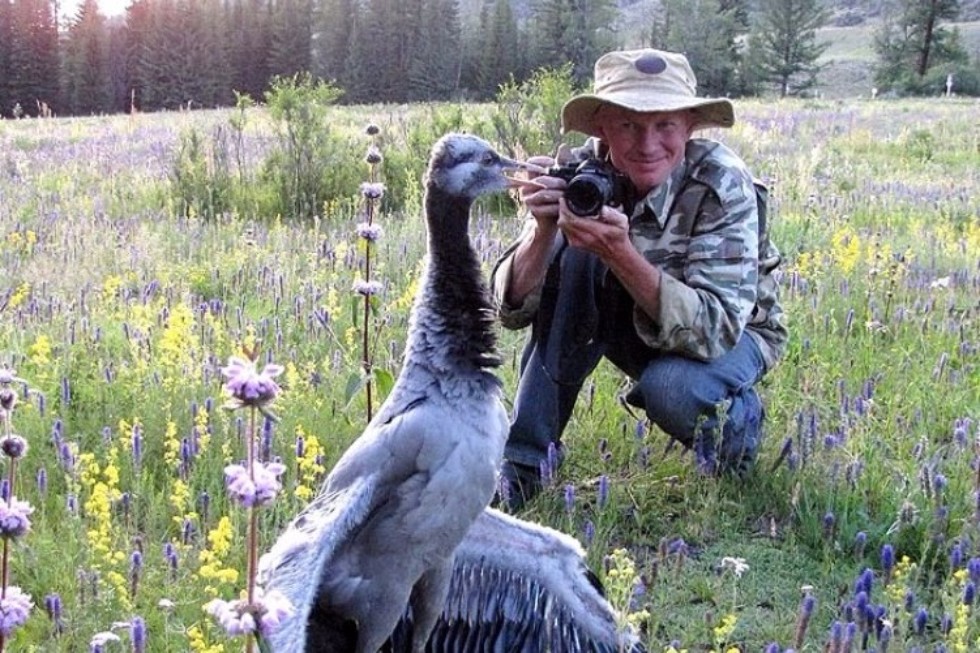 Rinur Bekmansurov, the head of the scientific and educational laboratory "Monitoring and protection of birds" of the Yelabuga Institute of KFU and the Nature Museum of the National Park "Nizhnyaya Kama," has presented his film "Shishkin's Places near Yelabuga" at the regular meeting of the Guides’ School. Rinur Khadiyarovich highlighted a number of issues that arose during the discussion after watching the film.

How the film was born

“First of all I tried to find out where the Shishkin’s places are. I got carried away by this subject after the local historians, who had already done this path. Having started to work in the National Park 14 years ago, almost simultaneously I began to study the theme of the Shishkin's places, comparing the findings to the reality of the journalist from Kazan, the first researcher of these places Yuri Frolov. In some ways I agreed with him, sometimes I found inconsistencies. For example, he claimed that the pictures “The Kama is near Yelabuga”, “Floods of the rivers, similar to the seas” were written from the Yelabuga fortress. But there has never been such a descent to the river Kama, as it was depicted by the artist, so I have moved the viewpoint a few kilometers to the west, behind the village Tanaika.”

“In 2007 I took part in the International Conference, dedicated to the 175th anniversary of the birth of I.I. Shishkin. I admitted that I did not know much about painting, about various subtleties and details and styles, but I'm not indifferent to it and I saw in Shishkin’s canvases not only an artistic heritage, but also an ecological one: he showed in his paintings the ecological situation of the 19th century.”

The idea is from Leonid Parfenov

“I decided to make a film in the style of Leonid Parfenov: I am in a shot, I keep a story, and it would be difficult to employ an actor and every time to take out him on shootings when I have time. So I did everything myself. Of course, not everything worked out from the first time. I stand before the camera, and the stupor begins, I do dozens of takes and again I ruin the shot scenes. I visited some places 5-6 times. I did not always like the lighting, the clouds in the sky, the wind. I would like to show the nature of the Yelabuga neighborhoods in the best possible way. A lot had to be thrown out, even a whole plot devoted to the making of etchings. In general, it was very hard work for me. 100 times I regretted that I had undertaken it. In 2016, most of the shots I reshoot and remade. Little by little, with the help of caring people, everything has somehow merged. Many thanks for the help for the Yelabuga News’ service, especially to Ruzil Zagirov for editing, and also to Alexandra Druzhinina for the wonderful music in the film.

In general, the film was conceived as an excursion, as a guidebook using special investigative principles (comparison, detail collation). Everything is as open as possible; so that anyone can go through the artist's routes, and try to make their own comparisons and conclusions.”

“At the conference in 2007 the art critic told me that he sees symbol of Orthodox churches towering above the field in this picture. I tried to present what I had seen in different way. In addition, that this is a delightful landscape, here you can see the remains of the radical forest as a result of slash farming. I spoke about other pictures from an ecological point of view. It was unexpected, but the audience applauded, the descendants of Shishkin approved my interpretation. It was very inspiring. But I did not hurry to publish my point of view, because I did not see many of the pictures myself. It turned out that I was right. Even in the title of the paintings there were errors. Last year in December, I went to the Perm State Gallery and saw that there was the Yelabuga name in the exposition - "Tanaevsky Bor", but the Internet had previously given quite a different name for this picture. That is, you need to visit museums, so as to watch and compare. Last year, this gap was filled by visiting the Tretyakov Gallery, the State Russian Museum and others.

And yet the film is the external side of my research in the study of Ivan Shishkin's works. You won’t tell much, the main thing is to achieve a certain impression.”

Nature is restored if it is not interfered

“Many people today are worried about the fate of Tanaevsky forest. This forest was restored after the extensive logging, which occurred here in the late XIX - early XX centuries. Restoration began in the prewar years and continued after the Great Patriotic War. We must pay tribute to the efforts of foresters - the forest was restored within the boundaries which were known from the maps of the early XIX century. But the planting of monoculture (Scotch pine) led to the fact that nature itself intervened in the cycle of development of this forest. A number of sites are infected with a pine root sponge, passing from tree to tree. It is a fungus that settles on the roots of the pines and causes the tree siccation. But do not be scared: some time will pass and nature will self-restore, if it is not interfered. The main thing is to preserve the integrity of the territory. Even now we can see that in those areas where dead wood grows, a natural forest is gradually formed, consisting of other species of trees. The more diverse the species composition of trees in the forest is, the more components in the forest ecosystem, the more stable it will be.”

“I have recently seen a program about farmers in Iceland. They complained that their products stopped being sold after an incinerator was built near the farms. Moreover, they can not drink their own milk. Apparently, it has chemical impurities. They also spoke about the increase of oncological diseases. This topic is very painful for me. I see how many people suffer from oncology, and young people also get sick and die. This is scary. The man often "digs a grave" to himself by his activities. But this is a separate big topic for conversation.”

Why is the faculty of biology?

“This is a difficult question. For a long time I "searched myself", although I had a predisposition for biology. When the school made a list, who and where will enroll, everyone knew everything about themselves, only I had a dash. As a result, I was not very confident about entering the faculty of biology of KSU. I knew mathematics well, but I passed it satisfactory. Apparently, something like a kind of poisoning happened: I looked at the examples that I had used to click them like nuts, but something jammed, and I could not solve them. I did not do it; I studied turning work, worked at the Yelabuga reinforcement plant, and then joint into the army. After the army, I no longer wanted to leave anywhere; especially the faculty of biology had opened in Yelabuga.”

“I worked in the Institute at the Department of Philosophy (I was unfortunately unable to transfer to the Department of Biology), in the police as a crime expert, as a biology teacher at the school, and since 2003 in the National Park. During the first years of my work in the “Nizhnyaya Kama” I got acquainted with the ornithologists from Nizhny Novgorod who came to Yelabuga - Sergey Bakka and Nadezhda Kiseleva. It was a fateful meeting that changed my life: I saw a whole direction for work; I understood what I can do in the field of ornithology.”

“My priorities today are: I would like to make my scientific results on beloved birds, eagles, turn it into a thesis. I have been studying them for the last ten years, five of them spent on studying the nesting, problems of their life within Tatarstan and partly in adjacent territories. Many thanks to the Ministry of forestry which has supported these researches. There is a lot of material; I need to process it, turn it into numbers, and to publish it. My research season mostly ends in the late autumn. But time is not enough. For example, it took me the whole autumn and part of the winter to create a film that took a huge amount of time, but I did not want to stop, throw started on halfway. A lot of time takes away earning the money, which again I spend for research. Until now, one of the items to replenish my family budget is construction work.”

I think that the film is very relevant for today. A certain subtext is hidden in it. I want you admire Shishkin’s nature for long, Shishkin’s pine woods. But everything is in a constant change, in which the main engine is the man. Landscapes are rapidly changing, the magnificence of nature is being lost, which was chanted by the great artist. But it is with Shishkin's nature that Yelabuga is associated. The artist and the nature sung by him have to become really "criterion" in decision-making, connected both with town planning, and with industry development. Without this "measure" the Shishkin's nature cannot be saved, and it will remain only on the canvases of the great artist.

Source of information: “Univesti”, newspaper of the Yelabuga Institute of KFU