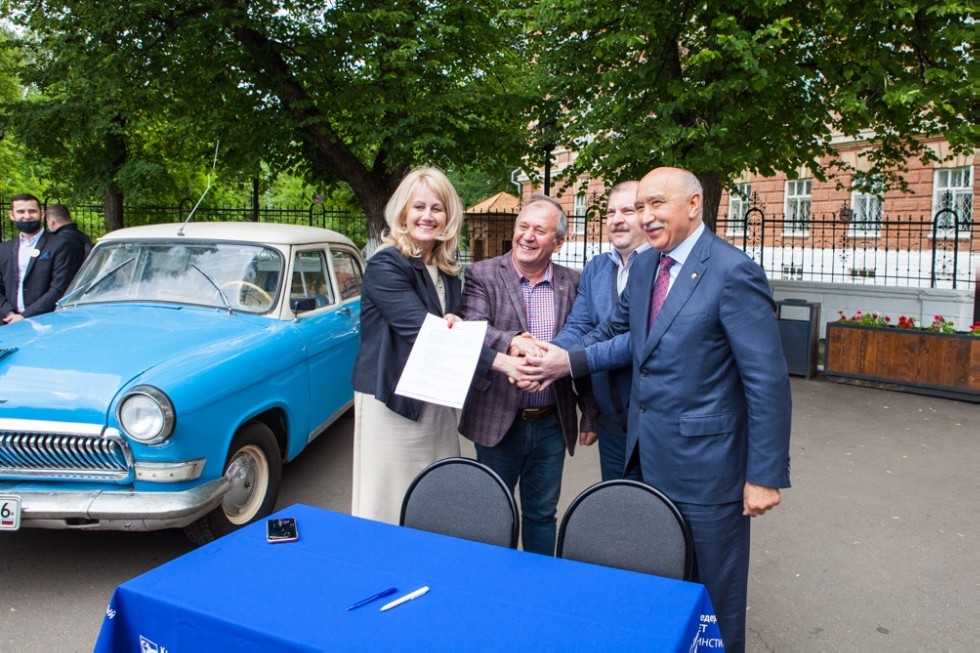 The Rector of KFU donated a retro car to the Student Designing and Engineering Bureau.

In order to get acquainted with the work of Student Scientific Classes, the Elabuga Institute of KFU was visited by a delegation of representatives of all structural divisions of the Kazan Federal University. The opening of the program took place on the University square, where an exhibition of vehicles restored or assembled "from scratch" by members of the Student Designing and Engineering Bureau "Evrika" took place. Another exhibit for the work of the class was solemnly handed over by the KFU rector Ilshat Gafurov, who signed the donation agreement for the “Volga” retro car.

“Many schools have switched from ordinary labor lessons to lessons related to IT technologies and robotics. The Engineering and Technology Department of the Elabuga Institute prepares specialists - teachers of technology for schools, masters of industrial training who teach in colleges. To be on the same level with pupils working in production, it is important to be able to do something with your own hands. Here the equipment restored by own efforts of teachers and students of department is presented. And the Class, I think, will provide additional opportunities to be involved in this process, in addition to educational programs. It is one thing when you are shown how a car works, even in an interactive form, and another when you design and assemble it yourself, " Ilshat Rafkatovich said.

Director of the Elabuga Institute Elena Merzon expressed her gratitude to the Rector for his support and invited the delegation to the conference hall of the Institute, where the presentation of Student Scientific Classes took place. The head of the research department Lenar Zainullin described the traditional directions of the Class activities and outlined new promising vectors for the development of student associations.

Among the oldest classes of the university are archaeological, the “School of Guides”, the “Writer's Planet” club (“The creative individuality of writers included in the class of children's reading”). The winners of the KFU Student Scientific Classes competition this year included the Student Designing and Engineering Bureau “Eureka” (2nd place in the Engineering and Technology direction) and the student scientific pedagogical society “Istok” (3rd place in the Socio-humanitarian direction).

In the 2019-2020 academic years 5 students - participants of the Student Scientific Class - received an Oxford scholarship and 2 students received a scholarship from the Academy of Sciences of the Republic of Tatarstan. Lenar Ildusovich drew attention to the fact that research activity combines sources for term papers and graduate researches, as well as scientific publications. So, in 2020, 73 articles were published, including 3 in the journals of the Scopus database, 8 - ÂŔĘ, 9 international and 2 foreign levels.

“We learned about the development strategy of the scientific classes at the Elabuga Institute, looked at new ones and evaluated the indicators of the figures – there is an increase of the number of classes (19), which is concerned with the work of the House of Scientific Collaboration and the enrolment of first-year students. But we also saw traditions - in the activities of "Čńňîę", the archaeological class. This shows that the class activity has been conducted here for a long time and has its own history”. – Arif Mezhvedilov, Vice-Rector for Social and Educational Work, summed up the results of the presentation.

During the visit, the guests estimated the equipment of the House of Collaboration named after K.A. Valiev, got acquainted with the work of the classes in the main building and visited the "University" school. Also, the event continued with a ceremonial rewarding of the best curators of academic groups, to whom Arif Magidinovich presented letters of thanks signed by the rector of KFU.