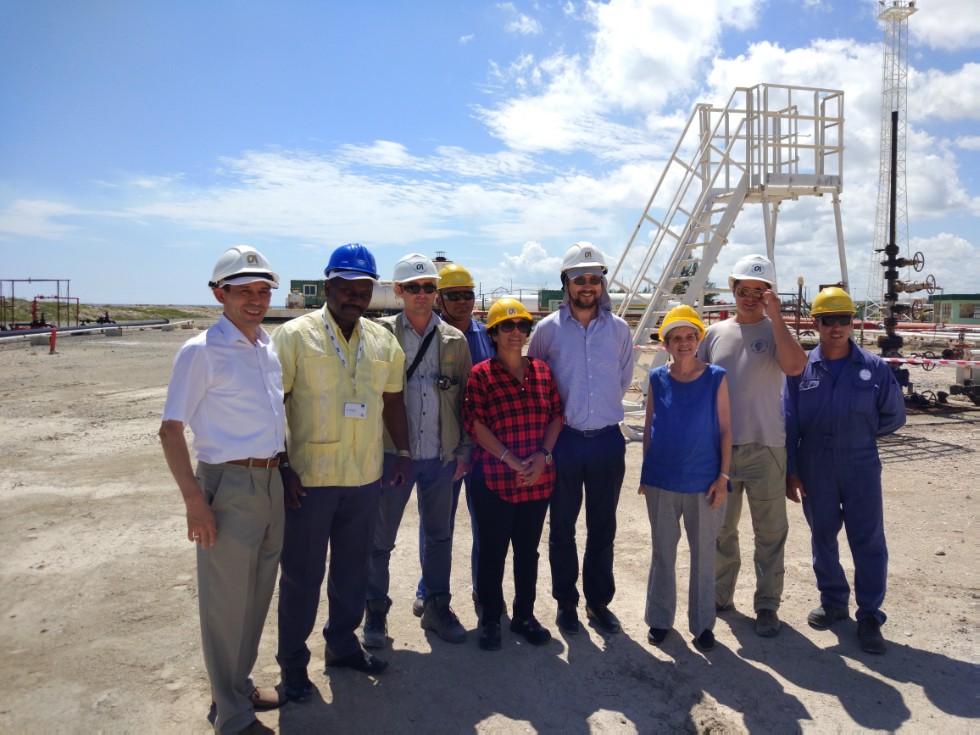 Working partnership between KFU and the state oil and gas company Cubapetroleo (Cupet), which began several years ago, is rapidly developing. Earlier we reported about skills improvement of the Cupet’s workers and 17 Cupet’s specialists, who admitted to the KFU master’s program.

A new stage in the development of relations took place on June 26-29, when a delegation of the KFU visited the Republic of Cuba at the invitation of Cupet consisting of the pro-rector of scientific activities Danis K. Nurgaliyev and director of the Center of Advanced Training, Quality, Management and Marketing Ildus A. Chukmarov. The purpose of the trip was introduction with the oil and gas industry of Cuba and discussing joint scientific and educational projects. The program prepared by Cupet for the guests from the KFU included visits to the fields, research laboratories, information center, exploration, drilling and operation departments of Cubapetroleo, and the Ministry of Education of the Republic of Cuba. The first day of the program was devoted to acquaintance with the company's activities and heads of departments, who told about the specifics of the oil and gas industry in Cuba and its problems. Particular attention was paid to the exploration of new fields, the head of the company's research division, Osvaldo Corso, described in detail.

Danis K. Nurgaliyev made a presentation for his Cuban counterparts and suggested ways of solving production problems in cooperation with KFU: "The directions of SAE "Ekoneft" research activities are aimed at increasing the production of high-viscosity oil and can be widely used on the territory of Cuba. Recently, the Kazan State University hosted the International Conference "ThEOR-2017", aimed precisely at this task. The experience accumulated by us and our international colleagues in the field of thermal methods of increasing oil recovery caused great interest among the management and specialists of Cupet". Cuban colleagues expressed their interest in cooperation with KFU on this topic.

Ildus A. Chukmarov, who spoke about the human factor in solving complex production problems, concluded the program of the first day: "Taking into account the specifics of oil and gas production, above all, knowledge, new competencies and all world experience are needed, especially in such complex geological conditions as in Cuba. We are ready to share our experience with our colleagues and implement training programs with international partners ". To date, the head of the human resources department of the Cupet, Tania Perez, is developing a package of educational programs to upgrade the qualifications of its employees in 2018.

One of the key moments of the trip was a visiting of the research center CEINPET. During the meeting with the head of the Center Amilkar Ugarro was defined the topic of joint scientific research. Danis K. Nurgaliyev made a proposal on the application of thermal methods for increasing oil recovery in Cuba. Significant was the visiting of the information center CEINPET, which possesses unique geological and geophysical data on deposits on land and offshore zones.

Discussion of research activities within CEINPET concluded with a meeting with Cupet General Director Juan Naranjo to review the agreement on scientific and technical cooperation between Cubapetroleo and KFU. Agreements were reached on the recruitment of a new group of masters and retraining courses for employees of the company for 2018, implemented within the framework of the intergovernmental agreement between Russia and the Republic of Cuba and these plans were supported by representatives of the Federal Agency Rossotrudnichestvo at the Russian Embassy in Cuba. Also, discussions were held and support was received from representatives of the Ministry of Education.

Another area within the mission was the visiting of the Boca de Haruko and Varadero fields, the study of production tasks, the specifics of development and operation, a meeting with representatives of Zarubezhneft, which implements SAGD method in Cuba. This direction is notable for the fact that in the fall of this year at the Boka de Haruko field Zarubezhneft planning to test the production of catalysts developed on the basis of SAE "Ekoneft" KFU. These works were also successfully discussed at the meeting of the delegation with representatives of the Russian oil company.

Фотография из материала: The delegation of Kazan State University visited the Republic of Cuba at the invitation of Cubapetroleo