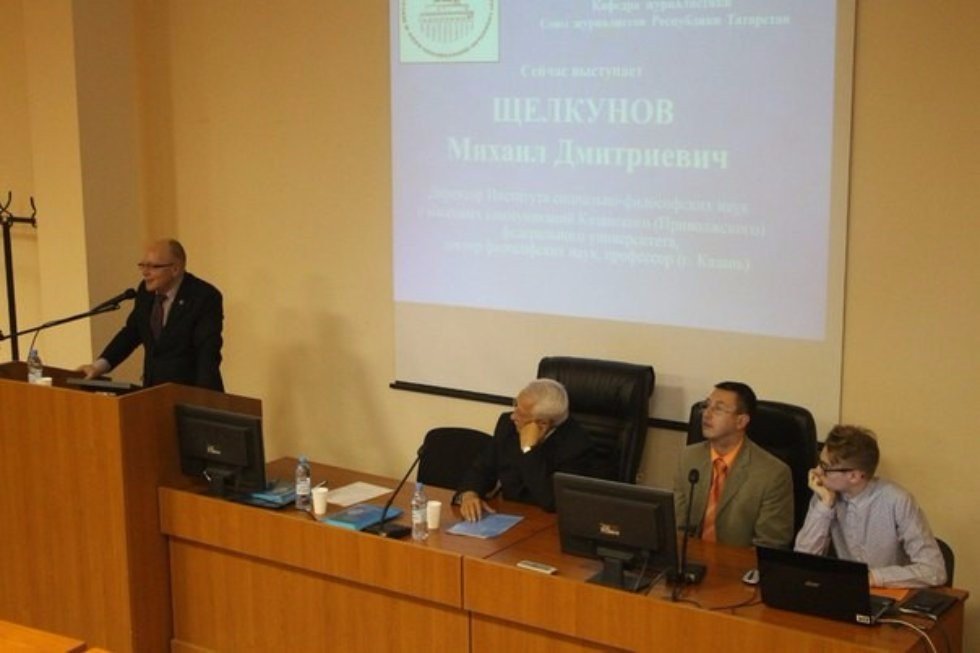 Kazan Federal University conducted for three days its twelfth International scientific-practical conference "Information field of modern Russia: Practice and effects." This year, KFU opened its doors to more than 30 participants, among which there are representatives of the Institute of Social Philosophical Sciences and Mass Communications, included in the Organizing Committee of the conference, as well as scholars and teachers from other cities and countries. Together, they made a three-day tour, not only on the issues and painful points of modern Russian journalism, but also in the literal sense traveling about our city of Kazan.

The conference "Information field of modern Russia" according to tradition was opened by the plenary session. With a greeting to the participants of the conference spoke Riyaz Gataulovich Minzaripov, First Vice-Rector of KFU, Mikhail Shchelkunov, director of ISPS, and many others. Their words about the direction of the conference on the development of journalism and the study of current issues in this field paved bridge to subsequent performances. Among the participants there were the scientists, the first speakers at the "information field", and those who are already a regular at the conference, such as Alexander A. Tertychnyi, professor of Moscow State University, speaking on "Satire in the online media." Many of those present noticed that the conference, according to its title, should be the development of journalism: the focus of many presentations were addressed to the Internet and social networks as an essential attribute of modern media.

Further, according to the plan participants had a trip to the editorial office of "Uni-TV" and the Geological Museum named after AA Shtukenberg. The following days were active in sections that could be visited by any listener. One important focus was the history of journalism in view of past mistakes, the other - questions about what modern journalism: business, politics, education. In each of the sections more than 10 performances were presented, among which could be highlighted the work of Vasil Zagitovich Garifullin, head of the Department of Tatar journalism, dedicated to the 80th anniversary of the dean of Tatarstan journalists Agzamov Florid, and even exclusive in English from Ilya Stechkin.

Today, the final day of the conference, participants were puzzled by reflections of what is modern journalism: business, politics or education. Many in their works raised the vital issue of Russian journalism and journalists abroad.

Publication results of the twelfth "Information field of modern Russia" made a collection of all the three days of papers and reports. Bright yellow edition was received by all of the participants.

The main conclusion, as already shown by the first day of the conference, should be the thought of the essence of modern journalism in our country. Despite the small digress to entertainment, in the words of a respected AA Tertychnyi, in our country there are still good journalists and journalism. And it will certainly grow, partly due to such conferences as "Information field of modern Russia: Practice and effects."