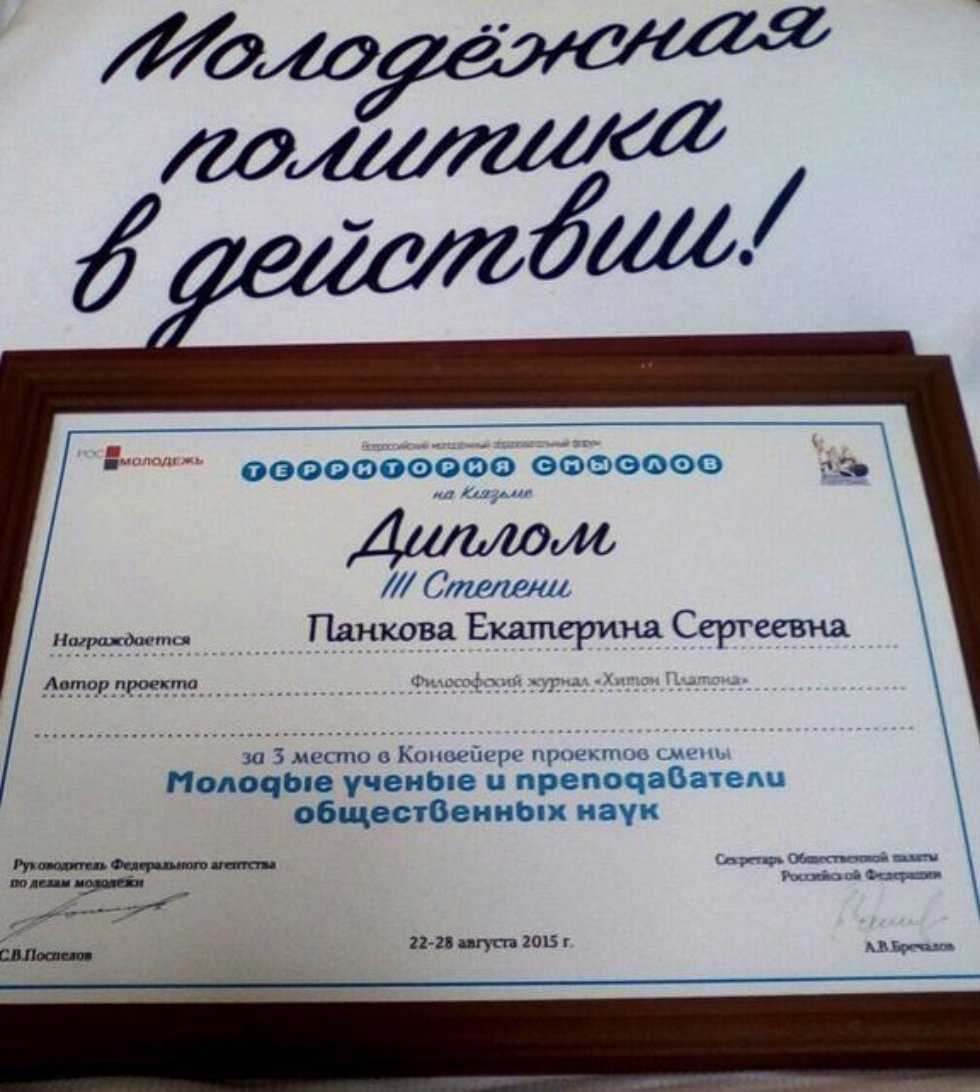 From 22nd to 28th of August the sixth change of the All-Russian Youth Educational Forum "Territory of meanings on the Klyazma" was held, bringing together about 1000 young scientists and teachers of social sciences. The Forum had a rich educational program, which was attended by Foreign Minister Sergey Lavrov, Minister of Education and Science of the Russian Federation - Dmitry Livanov, the president's aide Andrei Fursenko, and other distinguished guests. Also during the Forum the "Pipeline Project". was organized. For five days, they evaluated the defense of youth projects on several criteria: relevance, targeting, efficiency, scale, professionally. Conveyor members performed various tasks, communicated with experts. The result of the pipeline have been declared winners, who were awarded grants (from 100 000 to 250 000 rub.).

Active participatant in the forum was the graduate student of the department of social philosophy Ekaterina Pankova. She represented the team of philosophical student scientific club "Eidos" and defended the project Philosophical journal "Hiton Platona".

Philosophical journal "Hiton Platona" - is an electronic edition of the students of the Department of Philosophy and Religious Studies of Institute of Social and Philosophical Sciences and Mass Communications of KFU. "Hiton Platona" is an interactive platform for the expression of all students in the humanities universities of the Russian Federation in the sphere of interests including philosophy. The authors of the magazine are the students, graduate students and professors of philosophy, cultural studies, politics, religion, journalism, law, whose area of interest includes philosophy. "Hiton Platona" - a magazine on philosophy, its main purpose is to promote the philosophy.

The result of the "Conveyor Project" Ekaterina Pankova took the 3rd place, and the project "Hiton Platona" was recommended for a grant in the amount of 100 thousand rub from All-Russian competition of youth projects from the Federal Agency for Youth Affairs.

We congratulate the team of Ekaterina and philosophical journal "Hiton Platona" and wish them continued success in the implementation of the project!

Source of information: the department of social philosophy