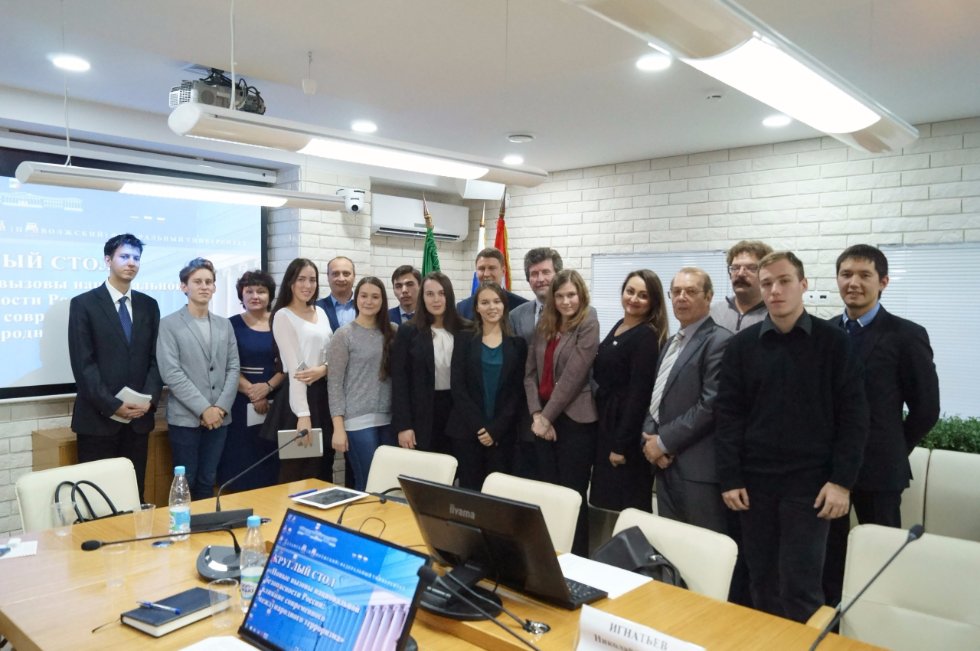 During the meeting, the student discussion club "Politskovorodka" acting on the basis of the Department of Political Science of KFU, held a round table devoted to the problems of patriotic education of youth.

The round table was held in the traditional format of the debate, which consisted of several blocks of issues. In the first block students and invited experts were asked to give their own definition of "patriotism", as well as to comment on the state of modern Russian patriotism in general. During the second block discussed the need for patriotic education of the younger generation, the third - the state's participation in the formation of patriotic education of citizens. In addition, experts and participants noted the urgency and the need for a new program of patriotic education in Russia.

It is worth noting that in the framework of the round table a lively discussion took place - the expert community was largely affected the understanding of patriotism of the modern student. For many of them patriotism was the synonym for pacifism or simple and banal - the love for the motherland. At the same time, the invited guests were trying to prove to the younger generation, that patriotism - is more than just a love of the homeland, it is something without which there can not be a modern society. And it is necessary to assimilate patriotism to the categories of identity, civic nationalism, actions aimed at the establishment and development of a stable civil society in Russia.

"For me, patriotism - it is, above all, love for the motherland. So I was brought up in my family, at school and now at the University. The Russian patriotism - it is mainly defending the interests of our country is "- shared student of 4th year of Political Science Sofia Mustafina.

At the end of the meeting of the political discussion club "Politskovorodka" there was adopted a kind of "resolution", announced by head of the department of political science of KFU Oleg Zaznaev. He concluded that the notion of "patriotism" has a right to exist, this phenomenon should be seen as a benefit, social value and patriotism must be educated and this must be done at the state level.

"Today we took an interesting and fruitful discussion of the difficult controversial issues that are at the same time is extremely relevant for modern Russia", - concluded the president of the student discussion club "Politskovorodka" Aigul Zaripov.

As experts in the work of the round table attended the chief adviser of the analytical department of the Secretariat of the President of the State Council Office of the State Council of Tatarstan Marat Habirov, Kazan City Duma deputies Lyailya Garifullina and Albina Kiyamova, chairman of the Committee on Children and Youth Affairs of the Executive Committee of Kazan, Sergei Mironov, a specialist of the department of Kazan City Duma Vitaly Beloborodov, vice-rector for administrative work and social development of the Volga Region Academy of Sport and Tourism Ilshat Faizullin, head of the organization of patriotic education of the Department of Youth Policy CFI Natalia Grebyonkina, Head of the Department of Political Science of KFU Oleg Zaznaev, Head of the Department of Conflict studies of KFU Andrei Bolshakov, Associate Professor of KFU Nikolai Ignatiev.

For information: Student discussion political club "Politskovorodka" has existed since 2012. Discussion Club operates within the scientific, social and educational fields. Every year, on the basis of the club's activities are implemented at various levels of participation, such as international forums, regional conferences, seminars and more, theme meetings on important social and political questions.

Source of information: Alina Iskanderova, the press service of KFU