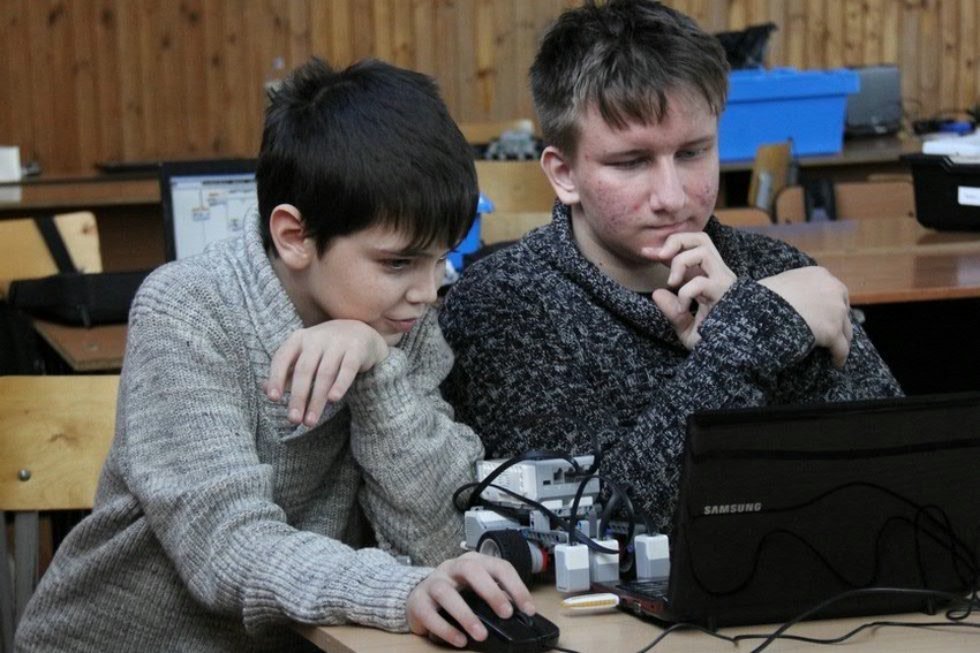 The Ministry of Education and Science of the Republic of Tatarstan andYelabuga Institute of KFU become the organizers of the competition.

Since 2014 competitions are held here twice year and the number of participants is not only reduced, but each time increases. Last Sunday 275 students (7 to 18 years) and 60 trainers from 20 cities and districts of Tatarstan and Udmurtiya: Kazan, NaberezhnyeChelny, Nizhnekamsk, Yelabuga, Zainsk, Mendeleevsk, Alekseevsk, Alkeyevsk, Arsk, Yelabuga, Zelenodolsk, Novosheshminsk, Nurlat, Rybnaya-Sloboda, Saby, Tetyushi, Tukayev and Tyulyachi districts of RT, Kizner, the village of Grahovo came in Yelabuga. In addition, there were a lot of visitors - parents and teachers of young designers-programmers. Students of the Faculty of Physics and Mathematics and the Faculty of history and jurisprudence helped the organizers and judges.

Under the terms of the competition, the participants should use the LEGO and other designers to study robotics. Each team usually consists of two members,operators individual participation is also possible), and can participate in one of five categories: the race on the line, sumo, kegelring, staircase, and a new track - a maze. Every year the organizers devise more complex tasks for the contestants, but it just adds a creative passion for young designers. At the beginning of the event the participants were introduced to the judges and the daily routine and for the next several intense hours, guys showed their agility and quickness of their Lego friends.

At the end of the competition the Head of the Training Division of Yelabuga Institute of KFU RinatIbatullin and chief judge of the competition, associate professor of computer science and discrete mathematics Alexander Minkin congratulated the guys, gave them diplomas and memorable gifts.

The main aim of the competition is a popularization of robotics in schools and exchange of experience. Such competitions help to attract schoolchildren to scientific and technical creativity, generate new knowledge and skills in the field of mechanics and programming.

According to many children, their enthusiasm for the construction is connected with their future career in this field. As for parents and educators, they without hiding their excitement, thanked the organizers of the competition for a real feast of ideas for their children.

VasilyBorisov, 12 years (secondary school of Biklyan, Tukayev District) " I began designing robots recently, just two months ago, but was so engaged that even threw another favorite activity - woodworking. My robot in the first attempt performed very well - brought down all the banks , but the second attempt ,unfortunately, was not successful. But I do not worry, I will still continue to work. I am pleased to look at the work of other children. 8 school children and our school teacher of computer science, physics and technology NakipovichRenatYakupov came from our school. He had come here with the guys before (in March and December 2014, March 2015), and they always won prizes. "

Results of the competition

Source: MaulidaSiraeva, the press service of Elabuga Institute of KFU

In the view of scientists: natural resources, landscape and climate in the history of Russia and neighboring countries The experts ofElabuga Institute KFU participated in the International conference.

A three-day international conference entitled "Natural resources, the landscape and the climate in the history of Russia and neighboring countries." completed its work in St. Petersburg the other day. The event was organized by the branch of the National Research University "Higher School of Economics" in St. Petersburg, together with the international scientific network for the study of the environmental history of Russia («Russia's environmental history network»).

The conference was attended by scientists from leading universities in Russia and abroad - UK, USA, Germany, Norway and Sweden. Andrei Vinogradov a senior lecturer in general and national history representing Elabuga Institute of KFU made a presentation on the dynamics of natural resources in the Middle Volga region in the XVIII-XIX centuries.

The content of the reports has shown that natural resources had a significant impact on many aspects of the life of Russian society both in the past and in the present - they actively affected iand continue to influence the foreign policy of the state, its domestic economic and social development. In this sense, the studies of the historical experience of wildlife resources in the Volga region, which are conducted by teachers, students and graduate students of ElabugaInstitute correspond to the most promising directions of modern historical science development. An important result of the conference was the appearance of new and strengthening old contacts between ElabugaInstitute scientists and the leading researchers of Russian and foreign universities in the field of environmental history. The event organized by the Department of Culture and the Executive Committee EMP was dedicated to the Decade of Persons with disabilities.

During the day everyone could make a contribution and send any amount of money to help children with disabilities in the City Palace of Culture. The heads of the leading city regional enterprises and organizations were the first and the most active.

The director of Elabuga Institute KFU Elena Merzon stressed the importance of such actions and noted that the measures aimed at supporting people with disabilities and found themselves in a difficult situation were held with the participation of the students and teachers of the Institute during the year: charity concerts, funding, flash mobs, workshops, fairs-sales, and other actions are usually initiated by the students themselves, the students and post-graduate trade union committee of the institute, volunteers.

An exhibition - sale of arts and crafts, different workshops were held for the guests of the festival. The event ended with a gala concert of the VI municipal Festival of Children with Disabilities "Planet of kindness" winners of and the city creative teams. The championship of Tatarstan Republic in powerlifting (bench press), which was attended by more than 130 athletes from different cities of Tatarstan took placein Zelenodolsk December 12-13.

The Elabuga Institute KFU Athletes returned from the competitions with medals and prize certificates:

GaripovaAlbina (Senior Lecturer of the PC Department) 2nd rank up to 63 kg.

This victory is the way to the championship of the Volga Federal District, in which the Elabuga athletes are taking part winning prizes for several years in a row.

As it has been noted by the participants themselves, in addition to the positive sentiments, obtained after the ceremony, communicating with other athletes and the ability to position their accomplishments and their school, their city in other regions of the country is of great value.