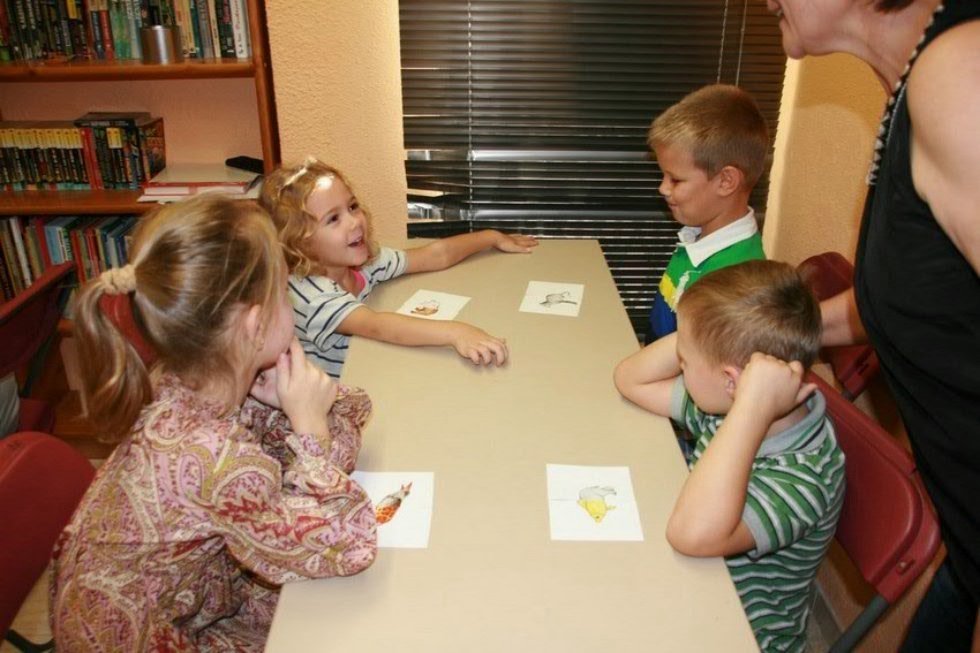 The introduction of innovative teaching materials was being continued in October, which were created by members of the International Laboratory with distributed participation "Innovative technologies in the field of multicultural education" created on the basis of Elabuga Institute KFU - "The Calendar Portfolio of a preschool child" and Games Library "Children of the World." It became possible with the support of the fund "The Russian World" and fund named after J. Korchak.

It is important to note that both manuals have been certified and have been licensed for use in the field of general education in the Russian Federation.

Workshops and lectures were held in Spain (Granada, MAPRYAL Congress, Barcelona, ​​the seminar "School of the Spanish-Russian bilinguals"); Austria (Vienna, II Vienna Forum Russian teachers); Czech Republic (Brno-Prague, refresher courses for foreign language teachers at Masaryk University); Russia (Moscow, RIA News lecture; Ufa, in the framework of the Presidential grant for the development of creativity of preschool children). Acquaintance of teachers with the calendar portfolio and Games Library as measuring, diagnostic, propaedeutic and developing materials for preschool children and (in terms of games libraries) schools and even universities will continue in Makhachkala, on the I All-Russian forum of teachers of Russian language and literature, October 29 - November 1.

Classes according to the manuals are already held in more than 20 countries around the world - from Korea to Canada; so that (among other positive results of the interaction of a system of regular workers and further education, parents of pupils and implementation of continuity in ethnic linguistic cultural education " the man of peace") there appear new modules (variants) of the games offered by both pupils and teachers. Especially popular are the games "push-pull", "Speech field", "Understand Me", "New Russian-tic-tac-toe" to facilitate the expansion of vocabulary, memory training, memory concentration, working out the switching over behavior and verbal codes, etc.

Teachers of preschool institutions of Europe and Russia gratefully accepted the new format of measurement and diagnostic tools "The Calendar- portfolio of preschooler", which allows to combine: 1) card observations of teachers and parents; 2) self-test family and self-test of educational organization; 3) an optimized definition of individual preschool educational route (based on his own works, given to him in a game format); 4) Separator sheets, guiding the work of parents and teachers to collect the key components of portfolio of preschooler; 5) competency sheets adopted by educators and parents as "kind of a quick reference guide," "age-specific list of knowledge, skills, and competencies ECU child from 0 to 6-7 years."

The composition of the Games libraries is being expanded, the next 3 games are being prepared for the publication. The author team includes teachers and researchers from Canada, China and Russia (IRYaiK MGU). Teachers are invited to cooperate from Tatarstan - kindergartens, schools, universities. Free electronic version of the game (for self-printing) can be ordered at info@bilingual-online.net. To buy "Calendar-portfolio" - as when ordering at the same address, and when prompted in BSU (mazunovalk@rambler.ru Mazunova Lydia K.). Why is the Sun "red" in the fairy-tales and where does the electricity come from?

The regular classes of "Children's University" were held at Elabuga Institute KFU.

Except for Elabuga school children "Children's University" was attended by students from Zainsk and Naberezhnye Chelny. An excursion to the Museum of History of Elabuga Institute was organized for young guests.

"Where does the electricity come from?" – That was the title of the first lecture for the young students, it was read by the candidate of physical and mathematical sciences Fairuza Sabirova. Students were able to feel the real physicists during the class: they knew what was «an electron" and who invented the "electrostatic machine", why a man can be stroked by lightning and why is hair electrified. It should be noted that children not only enthusiastically answered questions of the lecturer, asked questions themselves, but also complemented her and shared information known to them.

During the next lecture the audience was introduced by the myth about the sun on the example of fairy tale "Cock - a gold comb" and "Hare’s small hut." Interactive class was held by Candidate of Philology Nadezhda Shabalina, which passed in the form of game-quiz: children solved riddles, watched cartoons, and solved puzzles.

“The Children's University” is also attended by the parents. Series of interesting lectures are worked out for them. This time there was a training class with them on the subject "Art therapy work with children" and "Development of intellectual abilities of children." During the lecture the parents were involved in the drawing and analysis of patterns created by them.

After the lecture, children were divided into small groups, were organized laboratory courses for them: "Khokhloma Painting", "Programmable magical world", "Multstudio», “Plasticine production. "

The student of the "Children's University" from Zainsk Arina Koroleva arrives not for the first time for classes at Elabuga Institute KFU, she shared her impressions from that day lectures.

- I like these classes. They are very exciting; all knowledge will be useful for me in school. Everything I learn here, I tell my brother and little sister at home.

Next session of "Children's University" will be held on November 15 at 10:00. October, 28 educators of Elabuga Institute of KFU took part in the seminar (webinar) for performers of modernization projects in teachers training (pedagogical) education and for representatives of other Russian universities, organized by one of the operators of the project - Moscow State Psychological and Pedagogical University.

The purpose of this webinar was a collective discussion of the results obtained in the course of project activities of the leading universities of Russia. The forum participants got acquainted with the reports of Anatoly Kasparzhak- professor of the Higher School of Economics, Svetlana Streltsova - associate professor of the Institute of Philology and Intercultural Communication of (Arctic) Federal University, Arcadii Margolis - professor of the Department of Educational Psychology, Faculty of Psychology of Education MSPPU, scientific supervisor of the project "Applied Bachelor" and "Professional (pedagogical) Master" in the course of modernization of pedagogical education,

The Head of the Department of Pedagogics of Elabuga Institute of KFU Vladislav Vinogradov participated in the vebinar as co-lecturer, who voiced the main results of the project aimed to strengthen the practical orientation of teachers training education. The main idea stressed by the report was the formation of professional competence of students in the course of interaction between institutions of higher and general education in the “Applied bachelor” project.

Vladislav Vinogradov attracted the attention of academic colleagues to the most important issues that have been identified in the course of work at the project and require concideration of professional education community: structuring of competences of teacher’s professional standard into large groups, the most significant for this profession; the possibility of turning a school into a site for teachers training using networking; consequently, the interest of a school itself in cooperation with a university; the redistribution of functions between a school and a university in their interaction.

Vladislav Vinogradov pointed out that nowadays we had got an urgent necessity of creating a space of "university-school" type in which the partners of educational activity take equal responsibility for the results of its own activity and the partners’ activity as well.

“At present time”, he continued, “it is a very difficult task, due to separate existence of the above mentioned educational institutions, due to lack of mechanisms of their interaction except of commonly used, all these facts do not allow to establish mutual responsibility of partners”.

According to the responses of participants represented in the on-line portal with a text editor, a seminar was very informative and gave a new vision of opportunities for further work. In her poems Reseda expresses her admiration for the native poetry and love for the beauty of her native land.

Literary Prize named after Sazhida Suleymanova was established by the Company "Tatneft" in the Year of Literature and Art in the Republic of Tatarstan, and the first award ceremony took place on the day of 80th anniversary of the poetess October 3, 2006. The prize is awarded both to distinguished and young writers for the creation of outstanding work of prose, poetry and drama.

Reseda Saetgaraeva, a 3d year student of the Faculty of Tatar philology and comparative linguistics, has repeatedly participated in such contests.

As the girl mentioned, she began writing poetry at the age of 8. The first publication was in the republican children edition "Kөmesh kyңgyrau" ("Silver Bell"). Her works were also published in the children newspaper "Sabantuy", youth magazine "Yalkyn", newspapers "Bezneң gәҗit", "Yuldash", "Dulkyn" and others.

Earlier Reseda became the prize-winner and winner of the competition for the award named Clara Bulatova. This year the girl has got a student scholarship of X Literary Prize of Sazhida Suleymanova. The girl’s creative aim is to take part in the competition "Kauryi kalәm", which will take place at Elabuga Institute of KFU.

The poetry of Sazhida Suleymanova is the guideline for her as the girl said.

Having come from Muslumovo Reseda in her poetry expresses her admiration for native poetry and love for the beauty of her native land. She keeps friendly relations with the poetesses Shamsiya Zigangirova, Lily Sadrieva her countrywomen.

In Elabuga Institute of KFU Reseda is being supported and guided by the deputy of the dean in educational work, associate professor of the Faculty of Tatar philology and comparative linguistics Rosalia Minnulina.

According to the girl, she can’t imagine her life without creative activity: “Creative activity is everything for me! It's like breathing. You do not think in what way you are doing it, what for and why. It's just a basic need. If there is no breath - there will be no life. Creative activity is a way and an opportunity to communicate with the people living enthusiastic life. It gives an opportunity to open up the world with its best side and, perhaps, to make the world a little kinder and brighter”.

“And, of course, creative activity is a way of self-expression. My poems are a part of my soul. I live in them. My path, my life, my thoughts are entirely in my poems. If you have something to say to the world, if there is something in your soul, what you want to share, creative activity, its result is the most appropriate way”.