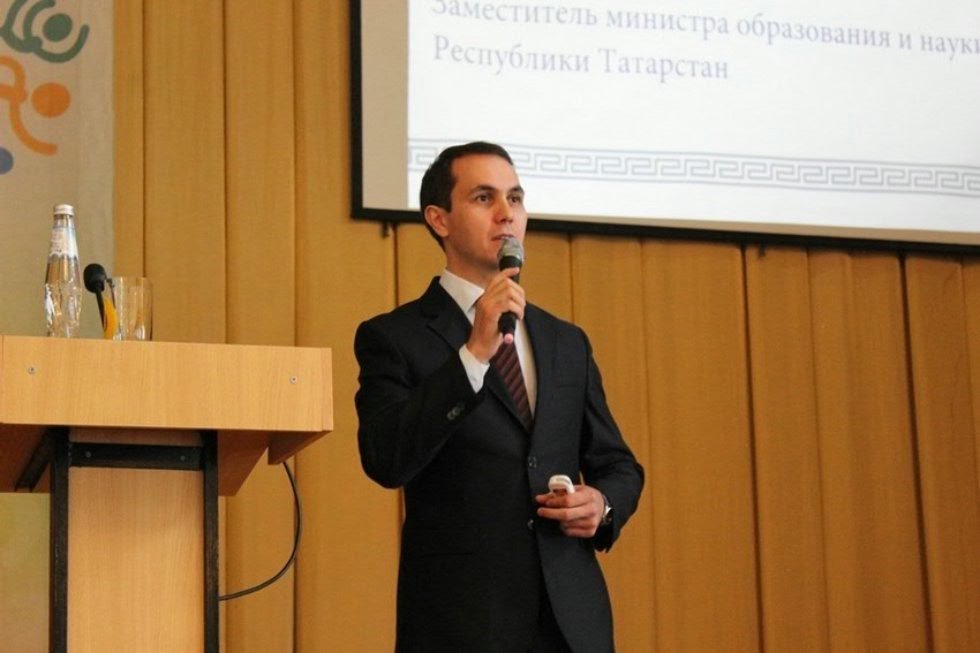 Education is a national strategy of Tatarstan

The Deputy Minister of Education and Science of the Republic of Tatarstan Ildar Mukhametov visited Elabuga Institute of KFU.

An active construction of buildings of preschool and school establishments, participation in educational grants, opening of the resource centers, organization of competitions for teachers, annual growth of teachers’ salaries are going on during these years.

"We place high hopes on the graduates of pedagogical directions, including Yelabuga Institute. First of all, I came here to convince the guys that working at school is interesting and it should not to be feared. It is necessary to become professionals, to love children and to educate highly professional, moral citizens of Russia, so that they "move" our country further ", - says Ildar Mukhametov.

In addition, the Deputy Minister directed the participants of the meeting to the fact that new teachers - current students - should raise the status of working trades among schoolchildren. According to him, the main task of employees of educational space in the field of vocational education is raising the status of the profession of a high-class workman. "This profession must become fashionable" - convinced Ildar Rinatovich.

At the end of the meeting Ildar Mukhametov urged all the students of Yelabuga Institute of KFU to express their civil position and to come to the forthcoming election of the President of the Republic of Tatarstan and the deputies of the municipal government and give their votes - to make the right choice! It is important for our country to maintain the present rate of sustained economic and social development. During the internship activities Russian teachers attended the day-care centers "Raduga" ("Regenbogen") and "Green beak" ("Gruene Schnabel") (tt. Güstrow and Marlow). Separate classes for children and teachers of these preschool educational establishments were held on 9, September.

Thus, within the framework of the master class, preschool educators of the day-care centers "Green beak" ("Gruene Schnabel") (Marlow, Germany) presented textile and educational books for the development of subject-developing environment. By their nature, they constitute a book consisting of individual theme sheets, which can be completed and alternated in any sequence. They can be used in individually differentiated and group forms of work with children. For the tutor it is a didactic-developing material, for a child - a subject-toy, and for parents - a new informative and creative resource. In order to determine the effectiveness and the possibility of using these textile books in the regular pre-school education, they conducted an experiment with the participation of pupils of mixed age group (5-6 years) in the amount of 8 persons (6 girls, 2 boys).

In addition to textile books, children of 4-5 years have been proposed "developing peas" (tactility, account, colour perception, the perception of size, logical thinking).

Practical workshops for making cards were held with children of 5-6 years and teachers of mixed groups (children: fine motor skills, work with different type materials and techniques, including their mix and matching, attention concentration and perseverance, the perception of colors and shapes, the ratio of colors and shapes, the work with a variety of supporting tools; drawing and writing); gift envelopes for chocolate and m o n k e y s – symbols of 2016 (teachers: focus on individual abilities, skills and needs of children of different ages, accounting competencies of the given age, taking into consideration the groups of children with health disabilities, children of different sexes, etc.).

Workshops were held during the working hours, and were aimed at the prevention of professional burnout of the teaching staff, team building among teachers, by changing activities and advanced training of their own skills within the Applied Pedagogy.

The level of staff training of EI KFU has been highly praised by the leaderships of Preschool Educational Organization, teachers and parents of pupils who participated in the experiment. It was encouraged to continue such cooperation in 2016 with the potential of international exchanges of teaching staff of preschool educational organizations.

The new school year started in the "Children's University"! September 13. Grand opening of the new season in the "Children's University" in Elabuga Institute of KFU

Elabuga Institute KFU again opened its doors for young students and their parents - the grand opening of the new season of the project "Children's University” was in the Assembly hall. The event began with a greeting the guests and participants of the project by the Director of Elabuga Institute KFU Merzon Elena: "This project has been implemented only in two cities of Tatarstan Republic - Kazan and Elabuga, and we are happy that we are able to offer children a wonderful project for free. Parents also have the opportunity to acquire new knowledge in the lectures of our professors and associate professors. Dear friends, I welcome you all to the fifth consecutive year as the students of the Children's University. I wish you all the best, be organized and interesting. Show your best qualities in the Children's University”. Elena Efimovna also discussed with the children the today's event in the Republic of Tatarstan - Presidential elections: "Today is the day of presidential elections and it is very responsible. If your parents have not been to the polling stations yet, after the lectures at the Children’s University immediately ask your parents to show you where the voting takes place. "

After the welcoming speech of Elena Efimovna the children had the first lesson titled "The ABCs of elections," which was conducted by PhD, assistant professors of Elabuga Institute KFU Muhametgalieva Safia Hamitovna and Kuzmenko Valentina Igorevna. They told the children how the elections of the president take place, when and what kind of a person can take part in them, they had interesting quizzes connected with the political sphere. For example, all the guys responded unanimously to the question of who is now the president of the Russian Federation - Vladimir Vladimirovich Putin.

The last part of the opening was the most exciting and fascinating for the children: "Scientific show of a mad professor Nicolas", which conducted Professor Lily and Professor Ilnur. It was interesting for both children and their parents. The hall was overcrowded, and every child was happy to participate in the proposed experiments. The guides of the show explained accessibly the laws of physics and chemistry, and showed them in practice, involving the participation of all children interested in the experiences. Young students were able to touch and hold in their hands the foam filled with carbon dioxide, to try "crazy soda", feel the frosty breath of dry ice. Also, some children have been able to create for themselves with the help of the guides a leading polymer worm, give it a name and take it home. The show ended by the “super-smoke” causing huge children’s delight: dry ice was covered in water and having evaporated, it has allocated a lot of carbon dioxide, puffed thus much of the surrounding area.

The next session will take place on October, 18th, at 10:00. Children will be able to learn where does electricity comes from, to work in the cartoon studio "PlastiŮine Production". An essay contest "My favorite teacher" is announced for children, following which the winners will receive diplomas and all the other participants - certificates. Practical training will be organized for parents "Art therapy in the work with children."

Welcome to the students fraternity! A Traditional ceremony of consecration into students was held by Yesterday's pupils, first-year students of Elabuga Institute of Kazan Federal University.

Since the 14th of September the rites of consecration into students are held by the students of all faculties in the sports camp "Burevestnik".

"Many consider that, after receiving the student card, you can rightfully be called a student. But this rank must be earned!", - convinced senior students of Yelabuga Institute of KFU. "The Olds" prepared for first-year students a series of tasks aimed to unite teams and to develop leadership’s quality: to devise the name of the team, to identify the group commander, to organize the successful completion of all stages on the way to the finish, helping and supporting each other in difficult situations. These qualities and skills will help yesterday's pupils successfully integrate into the student body of the University and to study – is considered by senior students.

On the 16th of September the initiation of freshmen was hold by the faculty of Tatar and Comparative Philology. The team had prepared in advance the name and motto. Each task meant finding "keys" in order to go to the next round. The purpose of the first station - to pass a rope spider web without touching the ropes, the participants must pass this stage in complete silence, but without losing contact with each other.

Next task: to guess in which of several balloons there is a note which indicates the location of the next station. But each ball was filled with a "surprise": flour, milk, grain, water. If a student had a mistake with the choice of the ball, its contents turned out on clothing, which, however, they were only in their excitement.

Next, the freshmen waited for "students soup". Not sounding the recipe of soup which was kept in severe secret, the seniors fed with it the beginners who confessed that it was the original soup, which they had ever tasted.

"Path of trust" students passed with their closed eyes, so it was important to trust to people with whom you go along, and try to support and help your neighbor, only in such a case they could you successfully pass this stage.

Ahead there was the station, which had given the opportunity to shout, in the literal sense of the word. The students had the task to extinguish a burning candle with their shouts. Here they were able to give freedom to the accumulated emotions.

And on "Sweet station" senior students gave freshmen a delicious, sweet dessert and solemnly congratulated with a successful finale!

The event ended with a flash mob and singing the student anthem.

From 14 to 18 September, the rites of consecration of freshmen into students will be held in 10 faculties, where they confirm their readiness to join the fraternity of Kazan Federal University.

Source: Dinara Almagambetova, Alsu Sadykova, the press service of the Elabuga Institute of the KFU