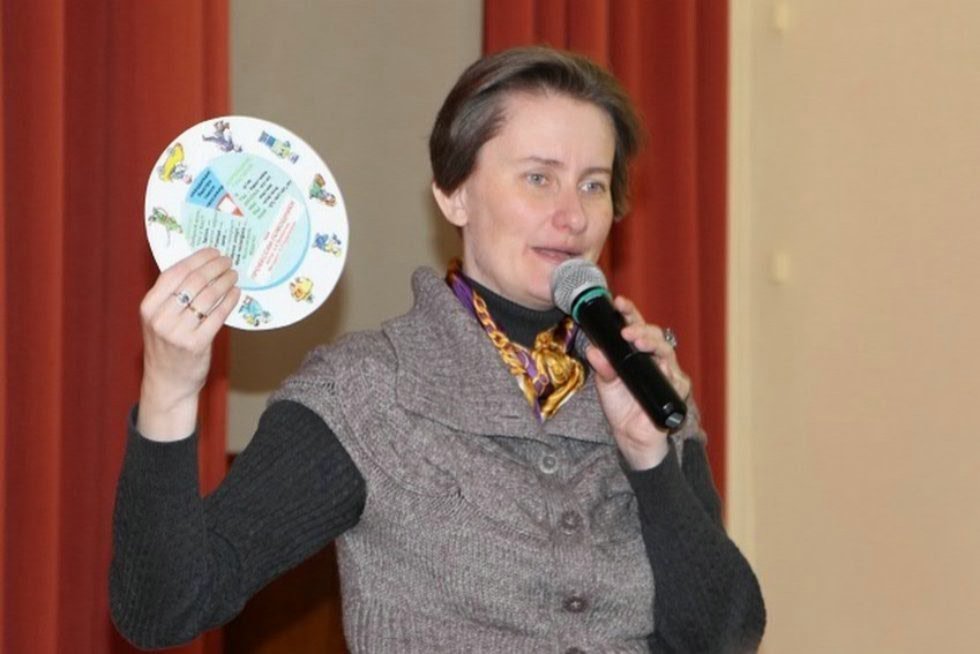 "Children of the World" play in Moscow!

In Moscow, in the educational complex School ą 64, which includes two kindergartens and two schools, under the implementation of the program "Children of the World" a seminar for advanced training of teachers and managers of pre-school care for elementary educational institutions ą 445 and ą 810 was held. The co-founder of the seminar is Elabuga Institute of KFU, and the Seminar was held in the framework of the university project for the creation and implementation of innovative gaming technology for multicultural educational organizations, the supervisor of international laboratories with distributed participation "Innovative technologies in the field of multicultural education" Prof. E.L. Kudryavtseva, director of the publishing house "Experiment and innovation in the school" A.S. Sidenko participated in it.

The seminar was attended by about 80 teachers, not only listening to a lecture about the specifics of working with preschool children in a multicultural educational environment, but also took place of the pupils and played "Push-pull", "Multi-touch", " Rescue Professions " and other games of "Children of the World" published in "RetorikeA" (Riga, 2015).

As a result the teachers thanked the authors, but what is more important they prepared a full report and invented together with their pupils new versions and modules for using games from the game store in preschool education. Over time, these materials will be available for viewing on the website of the publishing house "RetorikaA" and on the website of the International Laboratory.

Next day, a similar workshop was held in the educational complex of School ą 641named after Sergei Yesenin in Moscow (Headmaster L.V. Golodnova) in the framework of international scientific and practical conference "New targets and value of education: experience, problems, prospects for development".

How to assess the quality of education? On May 15 Elabuga Institute of KFU held a roundtable "Development of practice-oriented basic professional educational programs of applied bachelor education" with the participation of the expert of the Expert Analytical Center Kirill Mitrofanov ((HSE, Moscow). This event was held within the framework of the second phase of training courses for implementers developing new modules of the main educational programs with increased undergraduate practical orientation of future teachers training in the direction of preparation "Teacher Education" ("Teacher of general education"), which takes place at the university this week.

Kirill Mitrofanov who presided at the session, named a number of the most pressing issues that the developers of a new model of education face. The most important of them is how to evaluate the training of future teachers and the results of their professional activity. Citing as an example the European system of education, he stressed that the idea of ​​the quality of the Russian education system is the result of a comparison of standards (formal targets, set standards) with current figures. Meanwhile in Europe, the term "quality" refers to the ratio of the planned and the resulting educational outcomes. If to suppose that the school’s planned index of the average score for the state exams this year is "67" and this figure coincides with the actually obtained at the examinations, then in this case, according to European standards, it could be said that the school has worked effectively. And it is not so important that the average score for the Republic amounted to "68".

The question of assessment system is the most complex and relevant to all spheres of human activity, not just to education. Not by chance, in Russia for many years the most "sold" in the educational market are training in goal formation and evaluation activities.

The test system of evaluation in the educational process, which has spread in Russia, in the Moscow expert opinion, is the cheapest and fastest way of evaluation, with a number of negative aspects because it is not the volume of memorized information that is important, but the skills to find and use the right information, acquired by the students And if we need to assess SKILLS, the examination form as a way of evaluation is not appropriate because it evaluates KNOWLEDGE.

For example, in New Zealand in hiring a young teacher several characteristics are taken into account:

- Orientation in the program and methods of evaluation;

- Mastery of the technique to organize training and management skills (ways to work with groups);

- Ability to plan a training program and program means;

- Participation in the work of the school.

In Australia, a young teacher hands in a portfolio that "offers convincing evidence that he can analyze and use his teaching experience." This is a series of lessons conducted and a detailed des­cription of the educational process on the example of two students, the characteristics given by the mentor, and a list of comments about extracurricular activities of the specialist. The Portfolio is studied by three evaluators - the head of the institution, some other mentor and a representative of public service, then the joint decision on the competence of the expert is made.

According to Kirill Mitrofanov, such evaluation of the quality of training does not contradict, but even complements the standards that have been adopted in Russia.

The Expert’s opinion was listened to with interest by the participants of the meeting and caused a lively discussion. The teachers realize that the result of the planned reform of the education system will depend in many ways on the projects that will be developed by them.

The next stage of training will begin in the middle of June and it will be participated by teachers and heads of institutions of general education. This is very important since the reform of the system of teacher education needs strengthening of ties between universities and schools that should be based on their network cooperation.

In memory of the writer, poet and bard ... On May 16 Elabuga Institute of KFU recalled creative work of the poetic symbol of 1960-s, a novelist, a screenwriter, a poet, a composer, a singer-songwriter, whose works are worshiped by millions. On May 9, 2015 Bulat Okudzhava might have been 91years old.

The event, taking place in the Year of Literature in Russia, was participated by the students of the Faculty of Russian Philology and Journalism, and the organizer and inspirer of the creative meeting was the poet-singer, Rakhim Gaisin, Ph.D., assistant professor of Russian and foreign literature department.

"The poet who gets straight into the heart. In front of thousand-people audiences he was uniquely able to act as if he were speaking one to one with everyone" – this is how Rakhim Mukhametovich began his speech and throughout the evening he was able to keep the listeners in a special exalted mood. He told the students about Bulat Shalvovich’s life, about the ordeals that the poet had to go through, about his talent and unique creativity. Rakhim Gaisin performed the high shrill notes of the well-known and beloved songs of Bulat Okudzhava, "Not a tramp, not drunkards," "Prayer of François Villon", "Song of Mozart", "On duty in April," and many others. On May 25 Elabuga Institute of KFU held an event dedicated to the Day of Slavic Literature and Culture, which is inextricably linked with the names of the great Christian saints - Cyril and Methodius.

We may not know what the Slavic world would be like today, if it had not been for Cyril and Methodius - two of the greatest educators. Their activities are related to the appearance of the Slavic alphabet in 863, to create which they adapted the Greek one, adding14 more letters to the existing 24. The ABC, named after one of the brothers "Cyrillic", underwent significant changes in the times of Peter I and a number of changes in the XX century, yet it has survived to the present time.

This year 2nd- and 3rd -year students of the Faculty of Russian Philology and Journalism attended a special course "Czech language and culture" delivered by Anastasia Timofeeva, a doctoral student of Masaryk University (Czech Republic), who developed the s­cript of the holiday, the main theme of which is related to the language and culture of the Czech Republic. There was an interactive tour of the National Museum of the Czech Republic that helped to learn about the works of the famous Czech artist Alfons Mucha, who painted "Slavic epic", a series of 20 pictures. The excursion went on across the Charles Bridge and the festival guests listened to the legend of its construction with particular interest.

The vocal group "Acapella" sang songs in Bulgarian and Czech.

Maria Prokhorova, a 4th-year student, recited a poem of her own, dedicated to the Day of Slavic Literature and Culture "Hail writing Slavs ...".

At the end of the festival Evgeniya Pupysheva, Associate Dean for educational work congratulated all the participants and guests on the national Slavic holiday and thanked all the students and teachers for their participation.

The students and teachers of the Faculty of Russian Philology and Journalism express special thanks to A.A. Timofeeva for the invaluable aid in the organization of the Day of Slavic Literature and Culture.