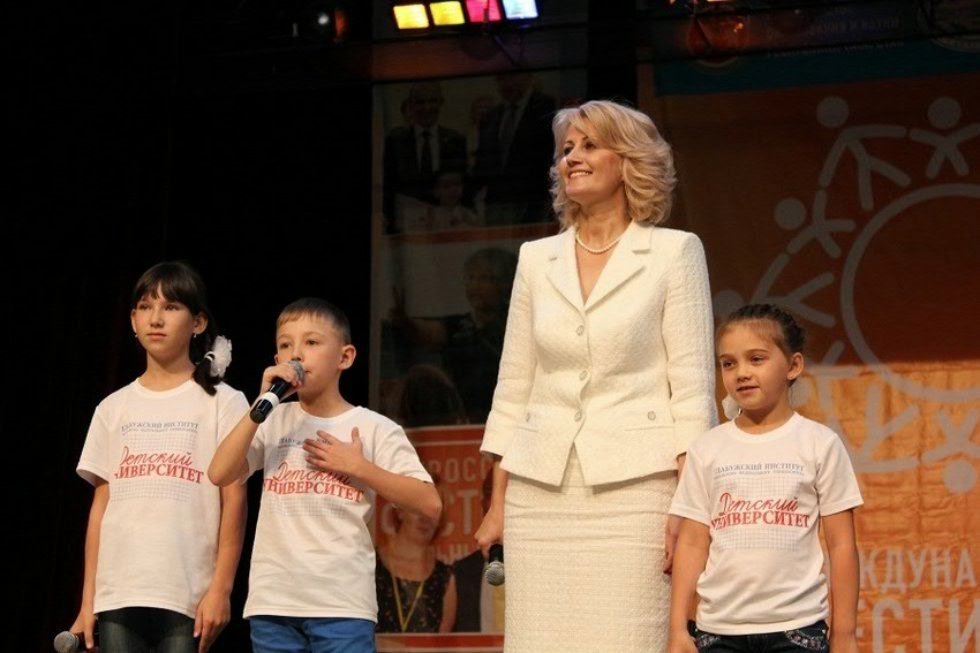 "We are all related to boundless love of children"

Gala opening of the 6th International Festival of School Teachers took place in Elabuga Municipal Palace of Culture today. According to opinion of the participants and organizers of the event, it becomes a unique platform for the presentation, evaluation and storage of the advanced pedagogical experience.

Before the beginning of Festival as the part of the republic action "Help get ready for school," the honor guests of the holiday, Minister of Education and Science of the Republic of Tatarstan Engel Fattakhov and Rector of KFU Ilshat Gafurov presented 12 future first-graders, who are the children of lecturers and staff of Elabuga Institute of KFU with school kits.

At the beginning of the ceremony the Director of Elabuga Institute of KFU Elena Merzon noted that the International Festival of Teachers has been joining the best representatives of numerous teaching in Russia and abroad for six years. She said, "We are all related to boundless love of children".

Welcoming the participants, Rector Ilshat Gafurov said, "Festival is a great find because its structure is different from the usual conferences, and it has a special significance for you, teachers and for Kazan Federal University. All academic fields of teacher training for our region are focused in KFU". The universities depend on the teacher's work, what the applicants come to there, and, accordingly, what specialists they will be here.

Minister of Education and Science of the Republic of Tatarstan Engel Fattakhov told about the role of this Festival in the development of the education system of Tatarstan. According to Minister, human development, training of highly qualified personnel, following the planned strategy of development in Tatarstan is one of the most important tasks for the Republic leadership. "We must create a system of education which would guarantee quality education for children, regardless of their place of residence: the countryside or the city. Festival gives us the opportunity to discuss these issues with teachers to identify ways to solve their problems."

On behalf of the Chairman of Tatarstan State Council Farid Mukhametshin Festival guests were congratulated by the Deputy of Tatarstan State Council Anastasia Isayeva. She said, “Much responsibility is placed on the teacher in the education of the person. We respect teachers for their hard work and their desire to constantly learn. Year after year the geography of Festival expands and increases the number of participants. Your forum has become a truly popular form of pedagogical communication. It promotes the emergence of new ideas and valuable exchange of experience and professional enrichment”.

On behalf of EMD Gennady Yemelyanov Director of the Executive Committee of the EMD Roman Islanov wished fruitful work all the participants of Festival.

Speeches of honorable guests were alternated with colorful and emotional performances. Real surprise for everyone was Saida Mukhamyatzyanova’s performance, a participant of show "The Voice. Children”. She congratulated the participants of Festival and sang Russian and Tatar songs with inspiration.

State Song and Dance Company "Bulgary" supplemented the program of Festival. A video with funny children thoughts about school and teachers touched and affected spectators.

The winners of the Republican contest "Teacher-master" were honored in the Parquet Hall of Elabuga Municipal Palace of Culture. The contest was held in two rounds from April 27 to July 1. The event was attended by about five hundred teachers. The Jury judged the author's additional program of master classes where the main criteria were creativity, innovation, relevance of educational problems and effective solutions.

Later Minister of Education and Science of the Republic of Tatarstan Engel Fattakhov held a public lecture and the ceremony of awarding certificates and thank-you letters of the best lecturers and staff of Elabuga Institute of KFU. August 19th Elabuga institute of KFU was visited by the head of training and methodical center at MSU Oleg Morozov with whom the staff of higher education institution is connected by the long-term friendship.

According to the welcoming distinguished guest of the director of Elabuga institute of KFU Elena Merzon, students remember nominal grants of Oleg Viktorovich which the best of them received - the student's leaders who are successfully combining study and research activity. Besides, as the Deputy and the First Deputy Chairman of the State Duma of the Russian Federation Oleg Morozov performed with progress reports at the institute annually and, later when deputies began to be elected not on districts, but on the political lists, Oleg Morozov didn't interrupt communication with our region and the republic.

The present meeting took place in the assembly hall of higher education institution, but the emotional atmosphere in the hall was not official. Oleg Viktorovich shared with audience his memories about the first visits of our institute, impressions of communication with students, teachers and the management, told about the formation of himself as a politician, and also presented his vision of the political development of the country in the short term. The election of the President of the Republic of Tatarstan which is coming on September 13 was an important topic of conversation. Oleg Viktorovich made the detailed analysis of development of the republic for the last two decades. Having made little digression to history, he reminded listeners how under the leadership of Mintimer Shaimiev, it was succeeded to avoid the global crisis moments in "dashing nineties", to reconstruct economy of Tatarstan without general "cleaning" in administrative circles, etc. The set political policy was continued by the current head of the republic, Rustam Minnikhanov. For the last 15 years Tatarstan turned into the richest region of Russia. Actively developing the infrastructure and industrial sector and, in spite of the global economic crisis, it is observed the increase in investments in the industrial and manufacturing sectors of the republic economy.

Today Oleg Viktorovich leads educational and scientific center at the Moscow State University for the preparation of administrative and political elite and the personnel reserve that is a continuation of that activity which it conducted in management on domestic policy of Administration of the President of the Russian Federation. One of the questions asked the guest concerned availability of training in this center. According to Oleg Morozov, this center is the project created on the basis of grants, it is an educational platform where young scientists will meet politicians, political scientists and the leading scientists of the country. Training is free. The course duration is 72 hours. It is issued the diploma of Moscow State University about receiving additional education at the course "Political Science" at the end of the course. The main task facing the management of the center is training the political class, the reserve of political parties, experts who dream to promote in policy.

Answering a question how he estimates development of the Kazan federal university today, Oleg Morozov expressed his admiration of work of the administration of higher education institution, the rector of KFU Ilshat Gafurov:

- When I was a student, there were 10 000 students at our university, and today only one branch – Elabuga institute of KFU totals more than 4000 students, and all taking into account all branches and divisions of KFU – about 50 000 people. It is already university which in many options - the quality of education, the directions of preparation, material equipment, and scientific potential - conforms to the international standards.

The associate professor of the Russian and foreign literature department of Elabuga institute Rahim Gaysin who is present at a meeting presented to the distinguished guest as to the graduate of KSU, the collection of poems "And university light …", having read one of the poems of this collection which he devoted personally to Oleg Morozov.

In turn, the deputy director of research Anatoly Razzhivin told to Oleg Morozov about annual large-scale action which Elabuga institute of KFU carries out – the International festival of school teachers and invited Oleg Viktorovich to take part in it in 2016. To the applause of the guest was handed gifts with festival symbolics, and he promised that one of souvenirs – watches with a festival logo - will put at home for a reminder about higher education institution and the promise made by him to arrive on a pedagogical forum.

With wishes of success director of Elabuga institute KFU Elena Merzon presented to Oleg Viktorovich panels with photos from last meetings in memory of university. In response the guest thanked for hospitality and support, wished to all teaching and student's collectives of creative take-off and new discoveries and achievements. And before leaving he agreed to take some memorable pictures with activists of student union committee.

At the end of an official meeting Oleg Morozov examined the new educational and scientific laboratories of institute created according to the program of development of the Kazan federal university with satisfaction having noted the high level equipment the modern equipment and the software of educational process. According to him, the material base of the Elabuga institute which underwent high-quality changes for the last three years fully corresponds to equipment of the best higher education institutions. KFU opens to foreign colleagues the way to the future of multicultural education with the help of the studying centre and countryside complex “ComputeriA” (Tver and Tver Region.; http://www.i-computeria.ru/conf2015/), Charitable Fund of Social Help and Support named after Janusz Korczak (Moscow, http://www.fond-korchak.org/) and the Board on the Russian Language through the mediation of President of the Russian Federation (in the person of L. V. Dudova, Ph.D.).

More than 50 teachers attended the seminar hold August, 18-25. Twenty-five teachers were awarded with the Certificates of Refresher Training and are allowed to work as testers in the system of diagnostic testing.

The course was based on the lectures read by one of the authors of the complex diagnostic tests E. L. Kudryavtzeva, Ph.D.

- Multicultural educational area as a challenge of the XXI century and its realization in bilingual education.

- Working practices with natural bilingual students (taking into account the new educational programs and standards used in the countries of the participants).

- The methods of psychological assistance for natural bilingual students.

- ‘Bilingual roadmap’ (for the Russian federation and the European Union).

- The types of tests on the Russian language (as a foreign language, as one of the native languages) and the spheres of their usage taking into account the age and aims of students.

The course consisted of 56 classes.

At the end of the course all the participants were given the Certificates that confirm their right to work as testers using this system of complex testing in their countries and regions and could set up contracts with Elabuga Institute of Kazan Federal University when the Testing Centers are inaugurated in these countries.

According to the participants, they were ‘much impressed by the practically oriented material, highly-qualified lecturers, and their readiness to respond to the requests of foreign customers while preparing the courses’. More than that, the participants stressed ‘innovative and modern material, the possibility to use it in the teaching process without changing the programs used in a studying organization’. All the teachers paid attention to the fact that there were the multicultural interaction and the exchange of experience between all the colleagues. They are of the opinion they ‘have been inspired by the courses and have found new methods of motivating their students towards learning the Russian language in the multicultural society’.

The source of information : the press-cutting service of Elabuga Institute of Kazan Federal University