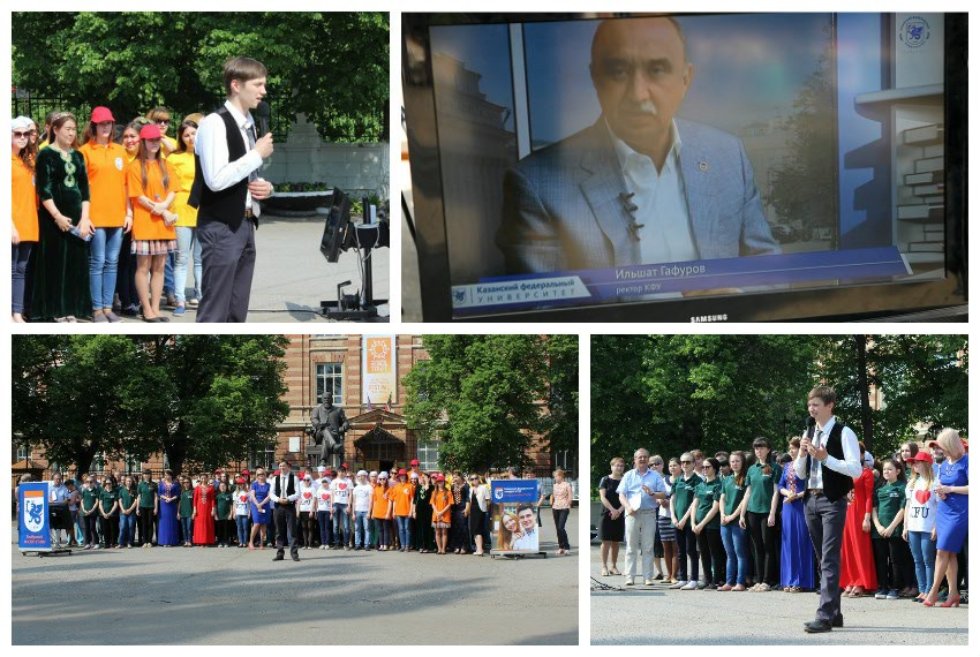 On May, 27 the "on line communication" with the Rector of Kazan Federal University Ilshat Gafurov Rafkatovich Gafurov was held.

For two hours participants talked about the issue on the most relevant topics related to the educational, research activities and social support in KFU. The Rector, students and staff also talked about the social life of the University. The opportunity to discuss the most important topics with the rector in the format of a live broadcast has been provided to representatives of Yelabuga and Naberezhnye Chelny Institutes of KFU, as well as the Universiade Village.

So, the students of Elabuga Institute were able the first to greet the Rector and to ask questions. On behalf of all the students and teachers a student of Physics and Mathematics Faculty Khamitov Islam asked the following question:

"This spring is very hard for graduates of the Institute, because, in addition to the main exam session, they should pass the voluntary certification which is proposed by the Ministry of Education. I would like to know your opinion about such kind of certification, and is it correct to say that it will soon change the standard form of exam? By the way, after the passing the exams we usually plan to rest in the camp "Burevestnik", in which summer schools are organized. Thank you for the support in the development of these projects and for the cozy and comfortable camp after its repairing. I want, as soon as possible, to evaluate a new modern playground that was built there. The number of those who wish to visit “Burevestnik” is getting more and more, but there are difficulties related to transport. We need a new bus for the mass departures not only in this camp but also in various national competitions, festivals, conferences. Can you help us?"

Speaking about the changing forms of the state exam, Ilshat Gafurov told that in the near future for all graduates who have passed the certification will be considered possible ways of encouragement. "Certification, which is voluntary, can not replace the state exam. At the same time, next year, in order to be eligible to work in the hospital medical institutions one will need to get certified. People who have been certified, of course needs to be motivated. This issue should be solved jointly with the Ministry of Education and Science of RT, because it is the main employer for graduates of pedagogical specialties. Perhaps it will be a one-time supporting money, and rentals, etc.," said Ilshat Rafkatovich.

The Rector reminded the participants of the event that in “Burevestnik” repairs were carried out, a few warm comfortable homes, new modern playground were built and in the near future it is planned to have the Internet connection. Here there are all conditions for recreation and, what is more important, for the combination of healthful activities with their studies during the various thematic schools at any time of the year. With regard to transport in the near future, as it was promised by the rector, the matter will be considered.

In the frame of the project Rector answered the questions of students and staff of KFU, which in a few weeks before were received in the press service of the university.

Hot topic of the communication with the Rector was also the theme of fellowship, the participants of the on line communication from the Universiade Village were interested by issues of competitiveness of KFU in the sphere of IT education. The conversation with the Rector was continued in the Engineering Center of Naberezhnye Chelny Institute KFU – here the students thanked the Rector for the renovated dormitory housing, and asked whether the repairing of the other buildings is planned.