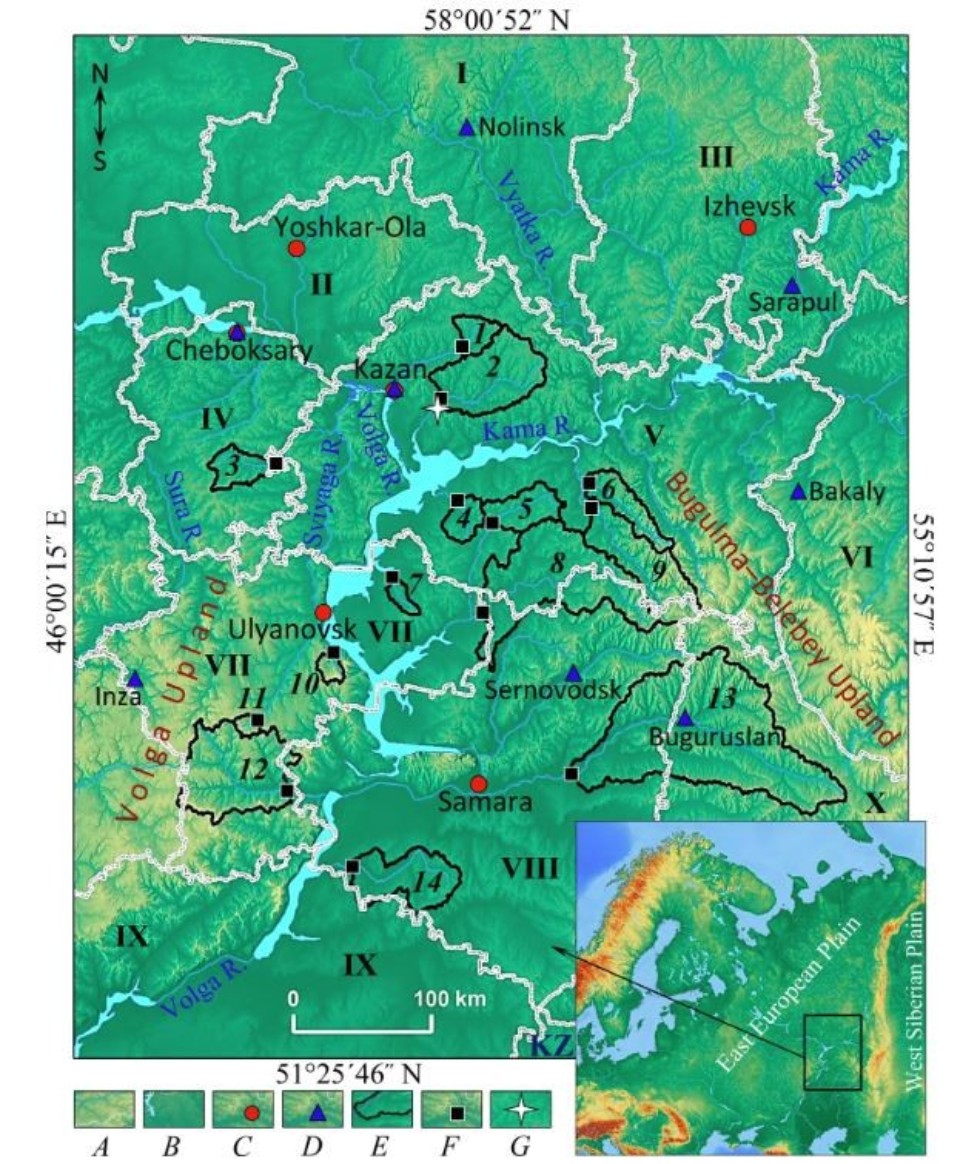 Figure: Location of the study region in the East European (Russian) Plain within European Russia

A paper by Kazan University's Artyom Gusarov appeared in Science of the Total Environment.

Dr. Gusarov (Paleoclimatology, Paleoecology and Paleomagnetism Lab) has been working on erosion processes for two decades as a part of various teams. In this research, he tackled the Middle Volga Region, the one where the city of Kazan – and Kazan Federal University – are situated.

A few decades ago, until the 1990s, the Middle Volga Region was considered to be a region very intense soil-rill-gully erosion, owing to a favorable combination of natural (especially the geological structure, topography, climate, etc.) and anthropogenic (high agricultural development of soils in the region due to their relatively high fertility) factors. It is widely known that the last three decades, following the collapse of the Soviet Union, have been characterized by changes in climate and land use/cover. These changes have affected the intensity of soil-gully erosion processes and the volume of their products – sediments, which are redeposited in different parts of river basins or migrate out of river basins with water flow.

In the paper, a generalized representation of the development trends of these processes over the past 50 years was made, based mostly on the analysis of the sediment that moves with river waters. The advantage of using long-term series of river sediment yield for research is that they are an integral indicator of the change in time of both soil and gully erosion processes. Hence, it is better for assessing trends on a regional scale. Additionally, the main trends in seasonal river water flow and their relationship with river sediment yield dynamics were identified. Information on river water flow and sediment yield is provided the Federal Service for Hydrometeorology and Environmental Monitoring of the Russian Federation. Long-term data from hydrological stations of 14 small and medium-sized rivers (the basin areas are from 237 to 12,000 km2) of the Middle Volga Region (from the Republic of Tatarstan and Chuvash Republic in the north to the Samara Oblast and Orenburg Oblast in the south) were analyzed. In one of the river basins (the Myosha River basin, Tatarstan) in 2016, field studies were also carried out in one of the small and ploughed catchments, in order to use it as an example to assess the erosion dynamics in the upper links of the river network. Their results were partially included in the study.

The processes of soil and gully erosion are largely responsible for the general degradation of the soil cover globally and regionally. This is a matter of environmental and food security of the region and the country as a whole. In turn, the mobilization of significant financial, technical, intellectual and other resources to combat soil erosion is required. This and other related studies have shown a significant decrease in erosion activity and volumes of its products, as well as in unevenness in intra-annual river water flow in the region over the past twenty years. Hence, from a practical point of view, this should lead to the redistribution of resources, the adjustment of a number of programs of nature conservation, the rational use of natural (including water) resources, and other steps.

A quantitative assessment of the contribution (share) of changes in climate and land use to the mentioned trends in soil-rill-gully erosion is planned for the near future. It is also important to study the delivery of erosion products from the upper links to the lower in the river network of the region under different scenarios of climate change and land use change. Another important area of research here is to study the migration and accumulation of sediment-associated pollutants in different parts of the river network of the region.

The article was made available online in November 2019 and is due to appear in print in June 2020.

The response of water flow, suspended sediment yield and erosion intensity to contemporary long-term changes in climate and land use/cover in river basins of the Middle Volga Region, European Russia