We are all actors in our life 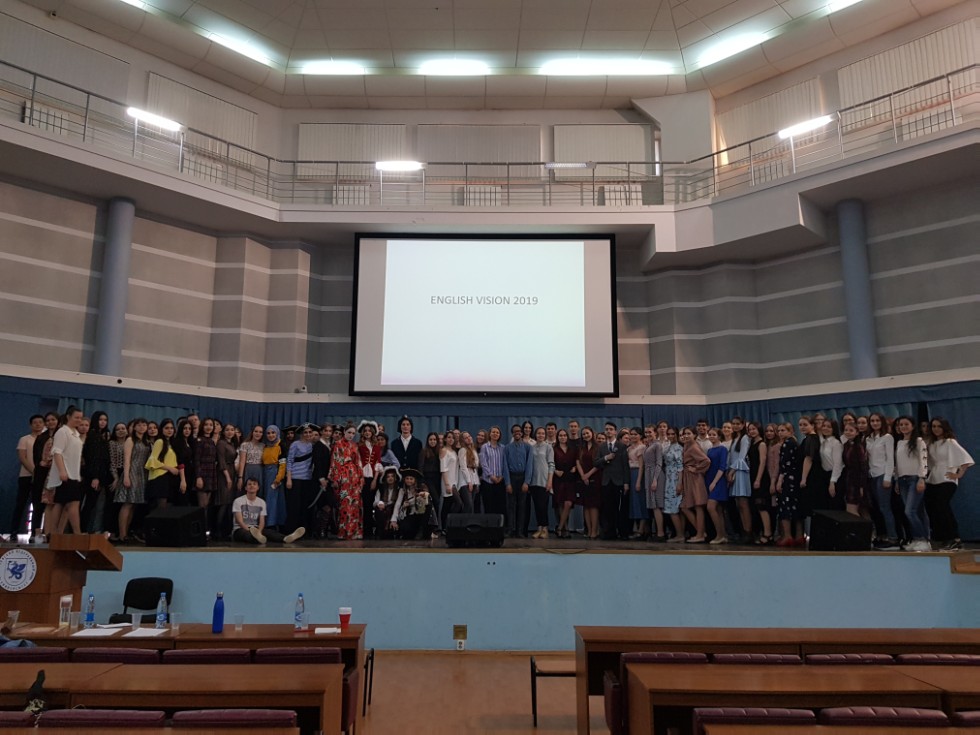 Every person’s life begins with some role. From the day we are born, to the final days in our lives, we always have roles to play. As newborns, we play the role of tiny human beings who are completely helpless and need to be taken care of. As toddlers, we start showing signs of development, and until our early teens, our most important role was to have fun and to go to school. By our late teens, we continue going to school, and are thinking of what the future will hold. As adults, we will have full-time jobs and become full-time parents. After some point, our only role will be to relax and enjoy life until we die. However, it is not often that we get the chance to experience a role which is completely out of the ordinary.; a role which has nothing to do with our lives, but, if played, correctly, allows us to fully experience a completely new world. Today, first and second year students at Kazan Federal University had the opportunity to revive some of the most classic characters in modern literature. The event “English Vision” is held every year and gives students the opportunity to unite with the group as a whole, and to show off their acting skills. The performance of each group begins with a short video that tells the audience about the life of each group, which shows the real life of students. Furthermore, the group performs to the best of their abilities, while the audience and jury try to guess from what film or book the composition is selected and presented. In order for the event to not seem boring, the organizers thought of some interesting and exciting competitions where each group can get extra points and compete with each other. On the stage were presented such famous works as “Pride and Prejudice” by Jane Austen, “Pirates of the Caribbean” by Ann Carol Crispin, “Romeo and Juliet” by William Shakespeare and the musical “Mamma Mia”.

I couldn’t help but notice that the preparation for the performance was well organized. Students prepared the costumes, the scenery, the music and the background design. Their speeches, emotions and roles were so real and sincere. For a minute, I felt like I was in the middle of an actual performance by real actors. Although it is quite difficult to be an audience member and to criticize other people’s acts, it is even harder to play a role. Concerning our group, we tried to convey all the feelings and emotions of the main characters as sincerely as possible. But the main thing in our performance is to be able not only to play the role of the characters and grab the viewer’s attention, but also to think about the problem of the relationship between lovers, friends, parents and children. After all, these problems are an integral part of our society, which we face quite often. At first, when you take the stage, you worry about forgetting the words, not to embarrass yourself in front of the jury, not to let the team down, and, most importantly, to win this competition. But it all goes by the wayside and loses its meaning once you begin to appreciate the more important things; rejoicing that we have invested in our work to the maximum. Indeed, you learn to appreciate those around you and your team for all their hard work. Even the desire to win is somehow forgotten. We don't care what the jury says, because we're sure we did it 4/28/2019. In my view, only a close-knit team can renounce their personal problems in order to effectively play their roles.

In fact, the competition was strong and we felt that each of the groups deserved a reward. The jury for a long time could not decide the final result, but still did it. They announced such nominations as: the best video, the best captain of the team, the best costumes and scenery, and of course the main nomination was the best performance. Until the last moment we did not think that the results of the competition would take place in this way, but we had won the nomination for the “Best Performance”! It must be very difficult to describe what we were experiencing at that moment. Tears of joy and happiness were in our eyes, it was hard to believe that our work was appreciated not only by us, but also by the jury itself. Perhaps this is the most unexpected and pleasant feeling when you do not wait and do not chase the victory, but it still comes knocking at your door. This just shows how getting lost in a moment is so important in life, as it can get you unexpected results. Although the event could’ve ended like this, there was a surprise for us all. After the award ceremony, we all gathered together drinking tea with sweets, laughing and talking with each other. Moreover, to remember this day for a long time, we decided to capture it by taking a few photos. In conclusion, I want to note that being an actor in your life is much easier than an actor on stage. To be able to enter someone else’s shoes for a day, without prior experience of that person’s life, is not easy. It is obvious that it takes a special skill set to be able to see and feel what someone else sees and feels. But this skill can be seen to be important in the real world as well, in areas which require understanding and compassion towards other people. It is an important lesson that we all learned today, and it is one that will stay with us for a long time.

Keywords: We are all actors in our life