Nobody is forgotten, nothing is forgotten!..
Main page \ Academic Units \ Humanities \ Institute of Philology and Intercultural Communication 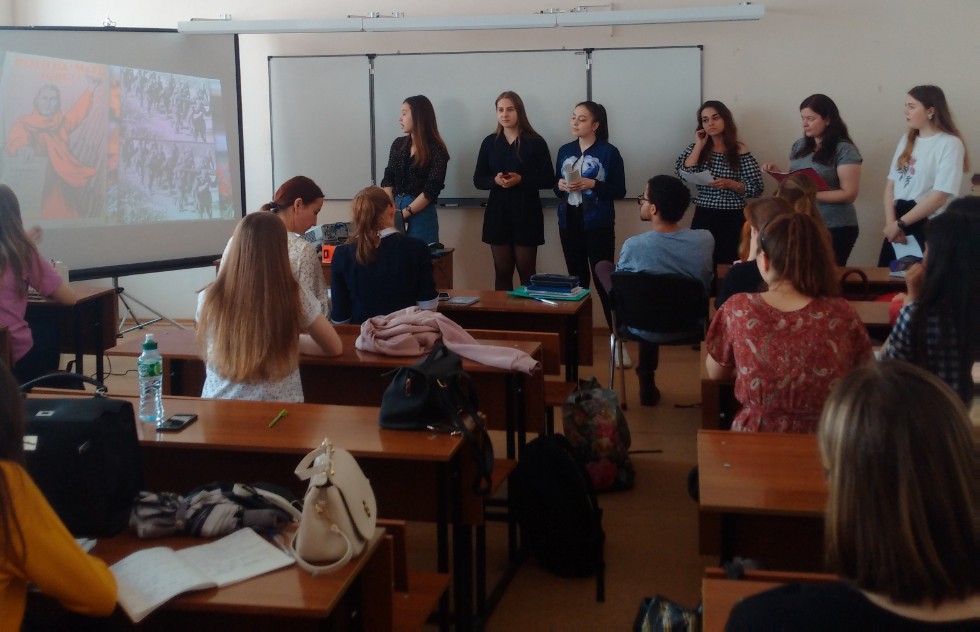 Within the lesson of "Intercultural communication" an event devoted to the Victory Day was held. It was organized by the teachers Mingazova Nailya Gabdelkhamitovna and John Leake.

Students presented presentations and thus we have heard more than 30 stories about courageous, valiant and masculine people of whom we are deeply proud. Here are some extracts from their stories.

"My great-grandmother Nina Nikolaevna Kuptsova was drafted into the army at the age of 19 in 1942, says Elina Kraynova, a student of the 10.1-809 group.- From January 1944 until July 1945 she served in the 36th branch of zenith artillery brigade. I admire her a lot!"

Another student from the group 10.1-809 Klopotovskyj Vyacheslav shared with us the story about his great grandfather: Nikitin Ivan Nikolaevich is my great-grandfather from my father's side. During the war he was a messenger. He was buried in Poland in a small town called Sanok in 1944.

Kamila Sungatova, a student from the group 10.1-808 introduced us to her family story:

In my family all four of my great-grandparents took part in the Great Patriotic War and only two of them came back. My great-grandparent's name from my mother's side was Valiev Fauzi Valievich. He was 26 when he was conscripted into the military service on the 22nd of June in 1941. He was a combat engineer. He reached Berlin. But there he was wounded and hospitalized; afterwards instead of going home he was sent to Japan. He came back in December 1945.

On the 9th of May our students will take part in the action "Immortal regiment" where we will go with portraits of our relatives who took part in the war to honour their memory. Indeed, nobody is forgotten, nothing is forgotten!

The text was written by Aysylu Abdullina, a student of the group 10.1-809

The photos were taken by Igor Krasnov, a student of the group 10.1-808