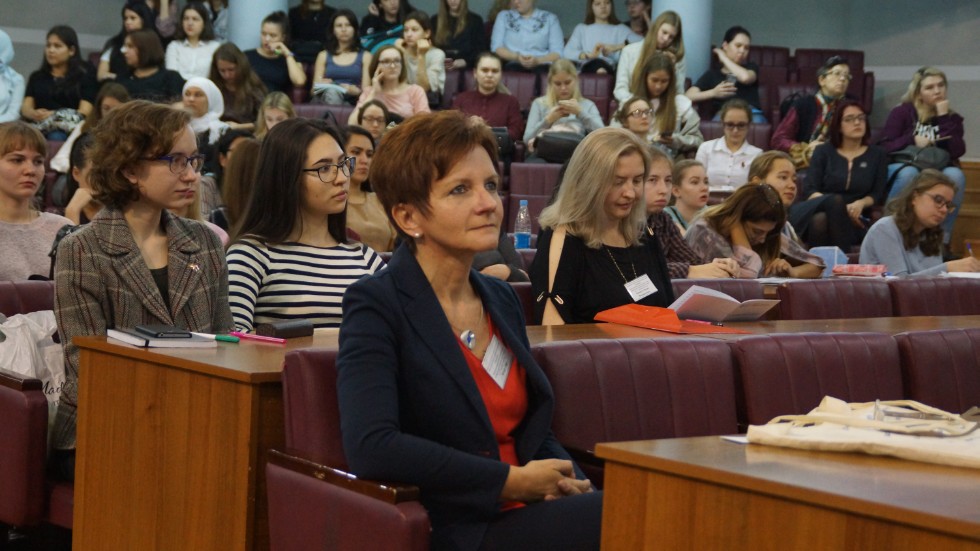 October 16, 2018 the international scientific-practical conference “Germanic Philology Today” began its work at the IPIC named after Leo Tolstoy. The conference was attended by scientists from various cities of Russia and foreign countries, such as Germany, Austria, Slovakia and the United States. At the opening ceremony of the conference, the Deputy director of IPIC for research activities I.E. Yarmakeev made a welcoming speech. He noted the significant contribution of the Department of Germanic Philology to the development of Russian linguistics, the development of new methods of teaching foreign languages, and the compilation of multilingual electronic dictionaries. In addition, I.E. Yarmakeev pointed to the ever-increasing influence of native Germanic Philology on the development of linguistics in general, as evidenced by the recognition of the merits of scientists from the Department of Germanic Philology. At the plenary meeting, Holger Kusse (Germany) made a presentation on “Sprachliche Stereotypisierung. Am Beispiel von Karl May”, N.S. Babenko (Moscow, Russia) “Once again about the term Textsorte in German linguistic genre studies”, Olga Wrede (Slovakia) “Von der Strafanzeige zum Urteil. Strafprozessrecht in der universitären Übersetzerausbildung”, S.I. Dubinin (Samara, Russia) “German-Russian dictionaries for Wehrmacht in military discourse”. The conference participants took part in the work of the sections devoted to the problems of the development of Germanic studies in modern Russia and the world in general, innovative methods of teaching foreign languages. There were heard reports on topical issues of modern linguistics and intercultural communication, phraseology and paremiology in the context of modern research, on innovative technologies in teaching foreign languages, on corpus technologies in lexicography. Within the framework of the sections there was a discussion of the main problems raised in the presented research studies.