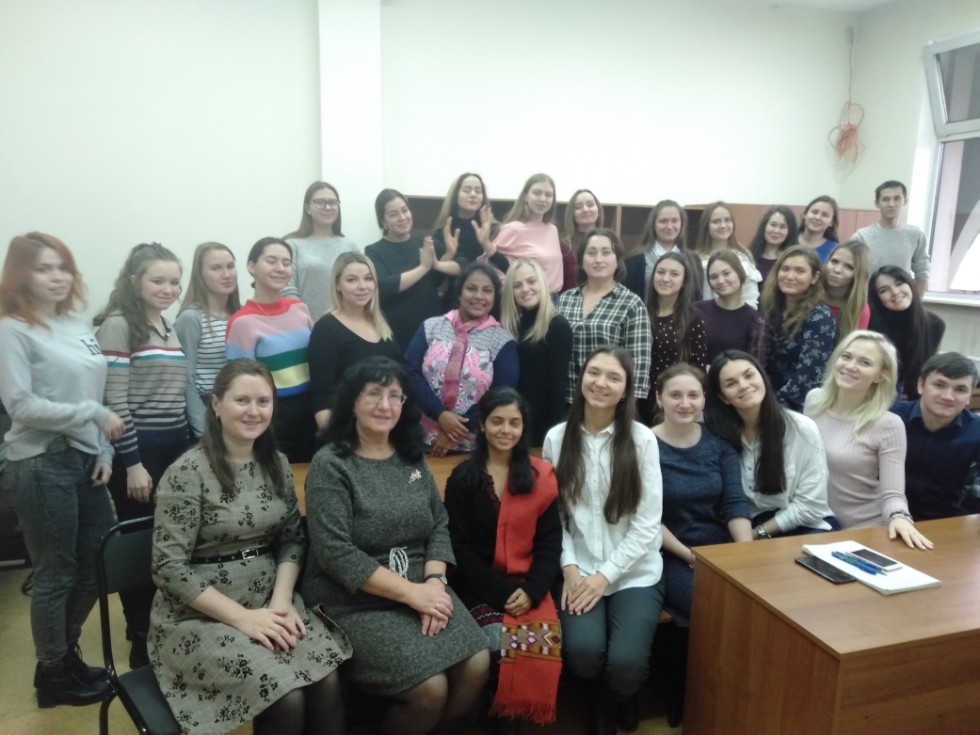 Series of Indian art master-classes had taken place at High school of national culture and education named by Gabdulla Tukay in November 2019. Two students from Partap College of Education (Ludhiana, India) Aditi Singla and Jyoti Bhatia shared the secrets of creative skills in the framework of special training program according to the Students exchange program in Kazan Federal University on department of Tataristics and cultural studies. Approximately ten meetings had taken place for students – future school teachers studying art and English language.

During the month guests from India told students of High school about the relationship between human sound and breath, bases and structure of Indian musical system, modal basis, rules of composition, classification of genres. It was noted that despite the fact that the number of main stages of Indian music “sa-re-ga-ma-pa-dha-ni” is equal to the European scale, they are not identical to each other. The essence difference is unfixed pitch in Indian music in contrast to European tradition where each tone has its own pitch. According to Aditi Singla, the music study process begin from the search of each students his own “sa”. During the long period of study students learn by heart several hundred ragas that change its image in each perform in the improvisation process.

Both students Aditi and Jyoti demonstrated with great inspiration a lot of Indian songs among which were hymns glorifying the joy of being, and sad melodies about the life of the Indian people. For the accompany for themselves they used Indian national instrument Harmonium – musical keyboard instrument that produces a sound when musician begin to inflate the fur and press the keys.

Aditi and Jyoti surprised the students of KFU not only by talented singing but by perfect mastery of choreographic art also. During the creative meetings with students of High school, they taught dance skills. Aditi showed elements of Pandjabi dance when Jyoti performed national dance of northern state Himachal-Pradesh that is located near the Himalayan mountains.

The culmination of each meeting invariably became a universal performance of Indian songs with elements of national choreography, such as "Jimmy-Jimmy", well known in Russia due to the popularity of Indian films, to the ringing clapping of hands.

Learning Indian music and dance created great delight among students, enthusiastically discovering a new world of unique culture of India. During their staying in the Russian Federation at Kazan Federal University Aditi Singla and Jyoti Bhatia have made some clarifications in understanding of very close traditions between our countries despite some differences. The distinctive features of each of them can significantly enrich the world of other cultures, close interaction and harmonious relations which are the key to their successful development. As a sign of consolidation of relations between Kazan Federal University and Partap College of Education at the final meeting in the presence of Principal of the College Dr. B. Singh and the head of the Department of Tataristics and cultural studies G. I. Batyrshina a solemn presentation as a gift of the Indian musical instrument harmonium was made by Dr.B.Singh from India, the very name of which should remind of the importance of harmony as a goal of development not only of educational organizations, but also of human society.