Foreign students of KFU made a spacewalk! 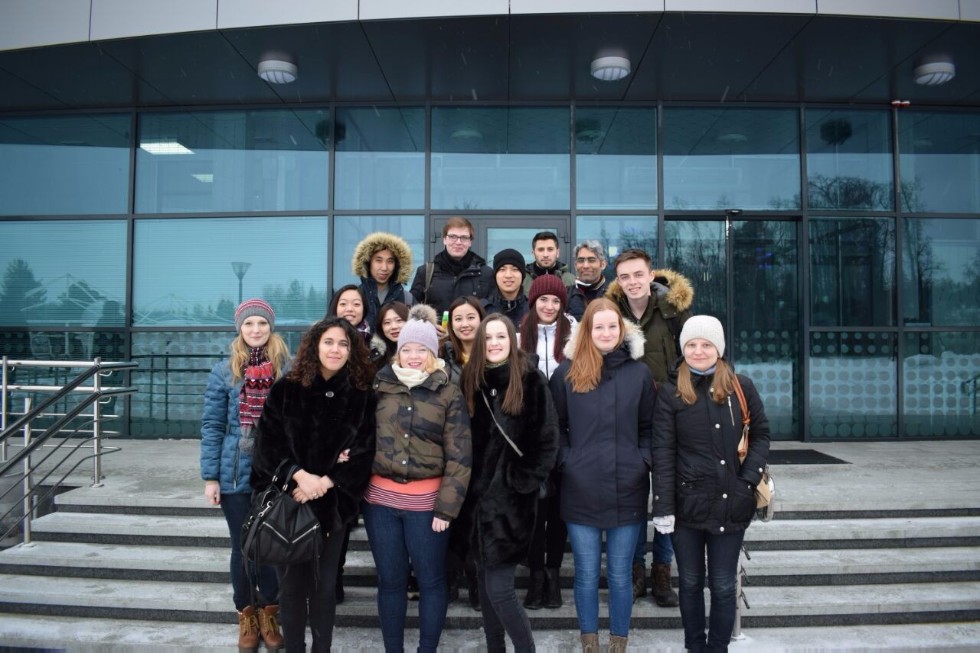 The stars are a great temptation. You never know,

what you agree to, approaching them.

It all started with romance! With romance of acquaintanceship and star adventures! A group of foreign students in a noisy crowd got on the train, where in just five minutes everyone got to know each other, treated each other to sweets and cookies. And we started our way ... The very date of the excursion turned out to be very significant - 52 years ago, on March 18, 1965 our country entered another milestone in the exploration of outer space. Cosmonaut Alexei Leonov made the first spacewalk ever in the history of humanity!

After a short but steep climbing up the hill, along the harmoniously lined pines and being surrounded by a bath odor of smoke from the Russian village nearby, the planetarium of our university appeared with all its vastness, grandeur and classic style of architectural structures. Surprisingly, some students immediately remembered the picture by Konstantin Vasilyev, which depicts an old planetarium. And even the moment that the artist himself once worked part time here at the laboratory assistant's rate (visiting the museum of our great countryman did not pass unnoticed)!

And here we are in a new very grand building of the planetarium.

The planetarium is a unique opportunity for everyone to go to space without spending billions. A huge dome-screen receives a three-dimensional picture of the starry sky being broadcast on it with the help of an optical fiber device of the latest generation. In tandem with it, a projection full-dome digital system works, creating the "presence effect", 3D without glasses! A deep starry abyss opened above our head, and we made an intergalactic journey. The students came out under the immense impression after watching the popular science film about the history of the telescope and the lecture about the structure of the solar system.

Returning along the same forest road, waiting for the train, the students vied with each other, calling the following names: "... the constellation of the mighty Perseus", "... the beautiful Andromeda", "... the rings of Saturn", "... the Milky Way".

Jakob Junghofer (Germany): "I really enjoyed the planetarium. We listened to the tour, then watched the movie. I learned a lot of new information about the stars and planets. The dancing robot appealed to me most of all. Also, after an experiment in which the weight of a backpack was compared on the Earth and on the Moon, I realized myself to be a strong person. "

Ali Mohhamadpour (Iran): "I am glad to have gone on the excursion. The way was very interesting, we saw the Russian village and the winter forest. In the planetarium I was interested in a fragment of a meteorite. I also liked the device, showing my weight on different planets. Of course, everyone was very impressed by the movie. I felt as if having flown into space myself. "

Shota Araki (Japan): "I will remember this trip for a long time. The 3D movie produced the biggest impression on me, thanks to special effects I was able to fly between the stars and planets and to learn a lot of new things. In addition, I met new interesting people. "

Macey Georgie Jane (Great Britain): "For the first time in my life I visited a planetarium. And it happened in Russia. It was very interesting to look at the cosmos from the Russian viewpoint. Especially I liked to inspect a piece of a meteorite."

Rey Kamiy (Great Britain): "I really love such starry halls. And I can say that the starry hall in Kazan is much better than the starry hall in Liverpool. It was very interesting, but listening to the entire tour in Russian is a bit difficult, because there are a lot of unfamiliar and complicated words. "

Source of information: Kapralova Y.V., a senior teacher , Ph.D.,  department of Russian as a foreign language

Keywords: Foreign students of KFU made a spacewalk!