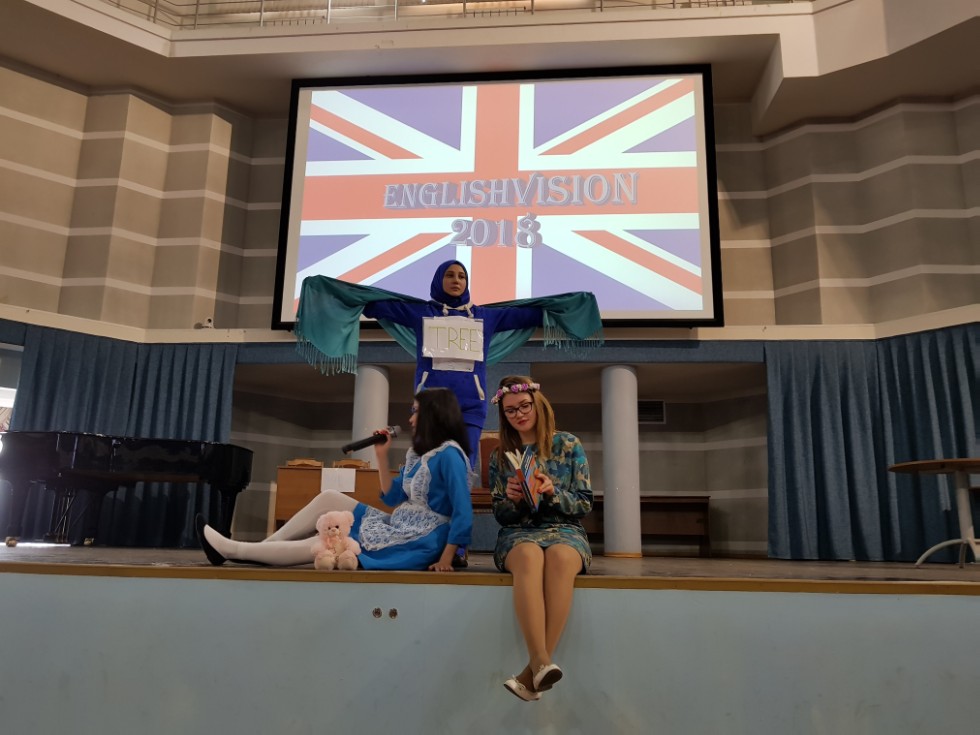 On the 25th of April, 2018, I had the pleasure of co-hosting the 5th annual English Vision Festival for KFU students alongside the incredibly talented, beautiful and recently turned 22 co-host Nailya Nuriazdanova. Alongside us were 5 brilliant judges from the English department. This year the event was able to attract 9 teams and over 100 people in attendance. We all enjoyed laughs, pre-performance pandemonium, 20 Audrey Hepburns, a Pulp Fiction reenactment, music, awards, and a lot of fun. And, of course, a lot of English.

English Vision Festival began back in 2014 as a way for first and second year KFU scholars to showcase the English they had acquired through their university studies and personal interests. Although the purpose of the festival has remained consistent unto 2018, the evolving students and faculty brought new creativity, inspiration and events to the young festival. Typically, the festival hosts a series of events where students can showcase their English language proficiency, cultural knowledge and creativity. This year there were 5 events in total that teams were judged on.

Two events, a video presentation and live performance were prepared by students before the festival. This is where students’ creativity flourished and their effort really showed. Included were Star Wars, Breakfast at Tiffany’s, daily student life themes shot with some impressive video making and a variety of music from trap beats to traditional Tatar music. Equally as impressive were the live performances. Here we saw reenactments of Shrek, Pulp Fiction, an Oscar Wilde short story and a Bollywood themed musical, among others. Other events included movie title translations, name that song, and a spin-off of the popular American game show Jeopardy.

In all, the festival was blessed with the bright minds of young adults looking to show off their language, acting and cultural knowledge. I couldn’t be more excited to see where these talented students will ascend to in the years to come. Though the English Vision Festival is a relatively new event for the University it was a success for all involved and will have many more successes in the future.