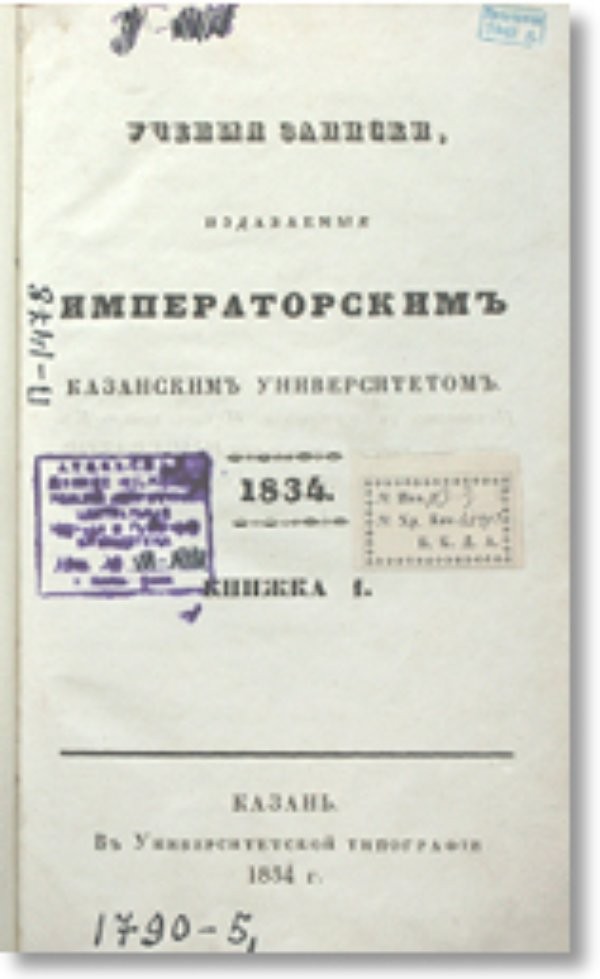 Uchenye Zapiski Kazanskogo Universiteta (Proceedings of Kazan University) is one of the oldest Russian academic journals founded in 1834 as an initiative of N.I. Lobachevsky, the rector of the Kazan University and outstanding mathematician. In the first issue of the Journal, the scientist explained how this periodical differed from other social, political and artistic journals describing "passions and feelings": Uchenye Zapiski is for those "who are meant to work for science and expect reward in fame and academic glory". The words of the famous scientist sound quite up-to-date. Science continues to strengthen its position throughout authoritative periodicals, which present not only the newest achievements in various fields of sciences that develop under the University roof, but also promote the formation and development of the research and educational community, as well as scientific schools and trends.

During the entire decade, Lobachevsky himself worked on Uchenye Zapiski, ran the publishing committee, and reviewed scientific papers. Philologist O.M. Kovalevsky was the head of the Journal during the next twenty five years. He was the rector of the University in the 1850s. Within the next ten years, the Journal was divided into two series according to the division of sciences - natural sciences series and humanities series.

Uchenye Zapiski stopped their activity in the revolutionary era. The Journal was resumed only in 1925, though published irregularly. In 1972, after the release of the 130th volume the Journal ceased to exist again. The first attempts to restore the Journal were made between 1995 and 2005; 19 volumes were published on irregular basis.

Uchenye Zapiski Kazanskogo Universiteta is published with a periodicity of six books a year within the "Humanities Series", and four books a year in both "Natural Sciences Series" and "Physics and Mathematics Series". Leading scientists and scholars of the Kazan University as well as prominent specialists from other universities and foreign countries publish their papers in the Journal.