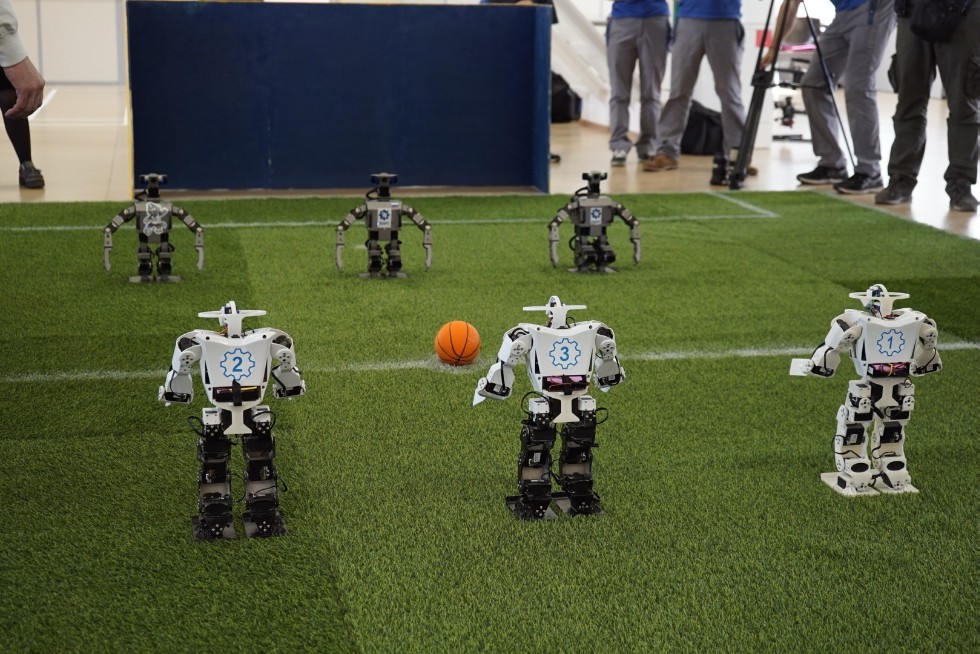 The two sides were the Higher School of IT and Intelligent Systems and the Institute of Engineering.

The game went to penalties after two goalless 10-minute halves, and the HSITIS team prevailed 2-0.

The winning team’s roster comprised ROBOTIS-OP3 models from South Korea, priced at a hefty 1 million rubles each. The software was custom-made by the Higher School. The Institute of Engineering preferred to put forth proprietary footballers called POMA. They were assembled entirely by the Institute and are valued at about 100 thousand rubles.

HSITIS Director Ayrat Khasyanov noted that the global goal for robotics teams around the world is to win against a human team by 2035.

Head of Intelligent Robotic Systems Lab Yevgeny Magid explained that robot football can be subdivided into several groups of tasks. The lower level is a robot finding the ball and kicking it. Then it must determine whether it actually aims for the opposite side’s goal. After that, it must seek for the ball across the entire pitch and move with the possession of the ball to the goal and strike, either individually or in coordination with teammates. Finally, the highest level is team play. Currently, most teams are on level two, but no one has yet achieved real team coordination.

He added, “Robot football is an instrument for us to teach students. In September 2017, we welcomed first enrolment in the master program in intelligent robotics. The first two semesters are dedicated to algorithms, route planning, and sensor installations. After that, we aim to give opportunities to test theoretical and practical knowledge on real robots.”

Andrey Fadeev, Head of Robotics at the Institute of Engineering, said that their group started constructing robots about half a year ago, “We are interested in building robots from scratch because we are engineers. We have to create both programming and mechatronics. The components were bought in local electronics shops, and the footballers themselves were 3D-printed.”