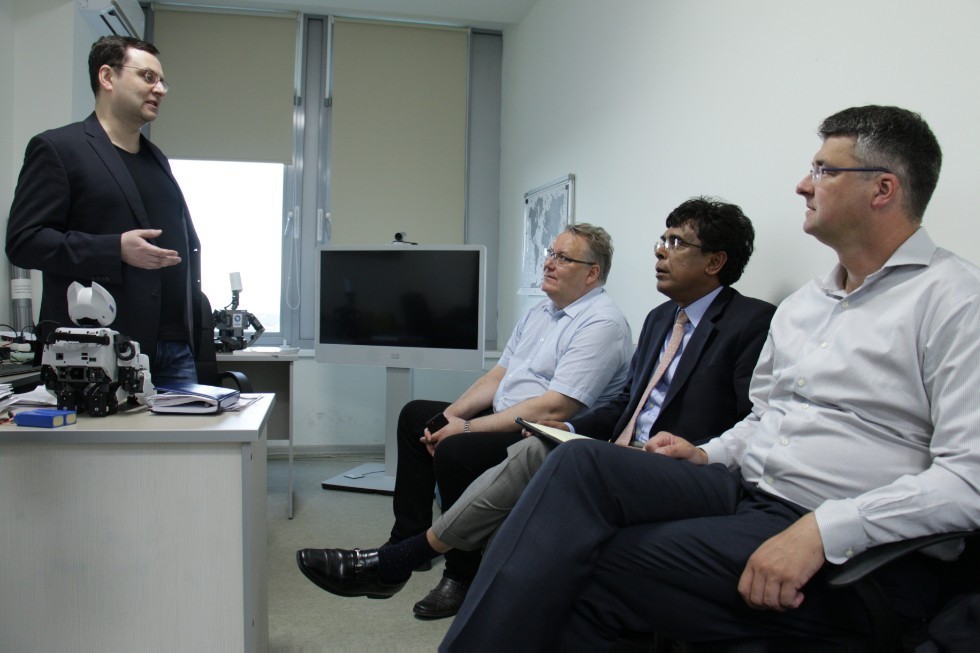 The guests were presented projects on which the staff and students of the laboratories of our institute work. ITIS Director Ayrat Hasyanov told the guests about the peculiarities of the work of the institute and its achievements. In addition, Maxim Talanov, the head of the Laboratory for Neuromorphic Computation and Neurosimulation, made a presentation on his research and spoke about the project of a spinal cord memristal prosthesis.

The meeting was also addressed by Evgeny Magid, Head of the Laboratory of Intelligent Robotic Systems (LIRS). He showed the robots and LIRS projects that were implemented by lab staff and studets. In particular, the delegations saw the projects with mobile robots "Servosila Engineer "and PMB 2.

Representatives of the delegation expressed interest in collaborative cooperation in the field of data mining and robotics.

ITIS is not the only institution to be visited by YTCA representatives. The visit of YTCA members to KFU will last for three days. During this time, guests will be shown other laboratories and institutes. In particular, the delegation will also visit the Institute of Computational Mathematics and Information Technologies, the Chemistry Institute, the Institute of Physics and the Engineering Institute.

Director of the ITIS Ayrat Hasyanov: “Last year Yazaki representatives came to us and became interested in some of our projects in the field of data mining, robotics, some of which were then at the initial stage. This year we presented ready-made projects. Our foreign colleagues also offered to consider the possibility of joint research. We are ready to implement the research part of these projects in partnership with YTCA. ”

Evgeni Magid, Head of the Laboratory of Intelligent Robotic Systems: “Colleagues from YTCA visited us for the second time. They were interested to see the progress of our projects in robotics in relation to the past year. Our students made a great impression on the guests, who showed their designs and presented them in English language to the members of the delegation. We told foreign colleagues about robo soccer project and its importance in the master's program in Intelligent Robotics. We also presented projects with mobile robots "Servosila" Engineer "and PMB 2. Representatives of YTCA Corporation expressed their desire to visit LIRS again and to discuss joint projects in more detail."