The time when you can do everything 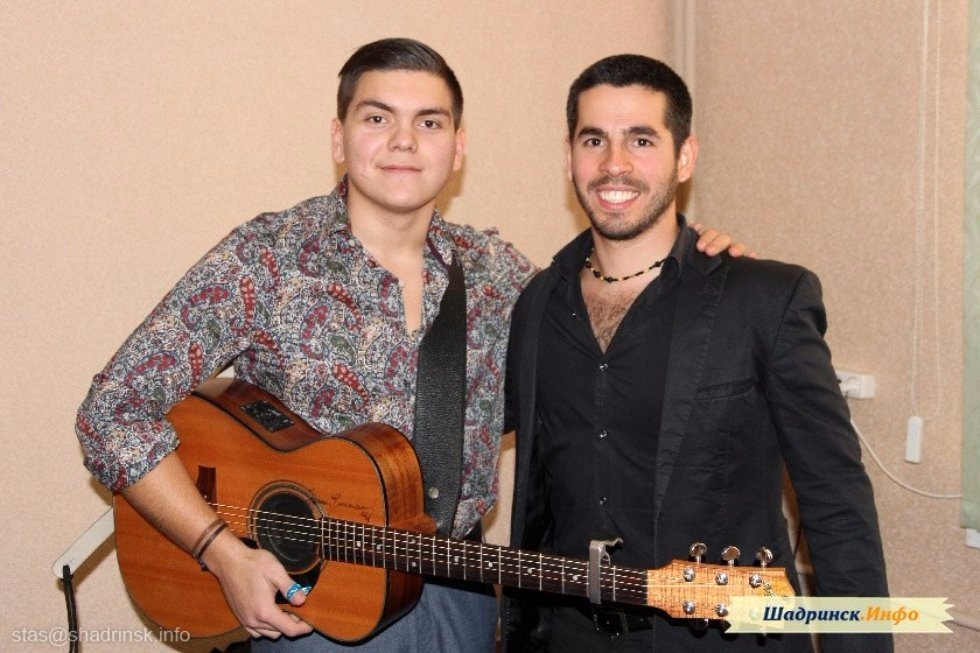 Studentship offers great opportunities, draws delightful prospects. Someone during study finds the work of his/her life, for someone profession makes plans by itself, and someone faces a difficult choice. Those young people, who make significant steps on the path to success during studying years, deserve not only respect, but careful attention as well. Other people can be encouraged by their example for the search of their own way of life and new achievements. .

Master’s Degree student at the Institute of Philology and Intercultural Communication of Kazan Federal University, Nikita Saveliev has chosen the way of music. A talented guitarist from Shadrinsk, who gave a lot of solo concerts, performed together with the Brazilian guitarist Lucas Imbiriboy, singer Mariam Merabova, humorist Yuriy Galtsev, now is learning new roles of a singer and composer. In the interview with our correspondent, he told about the latest events in his creative life.

Nikita, you have recently returned from Moscow. Tell us about the purpose of your trip.
At the present time I’m carrying out an important project for me – recording my own songs at the studio. I’m lucky that bigtime musicians take part in this process. They are: bass guitarist Anton Gorbunov, who has previously been working with such stars of show business as: Vladimir Kuzmin, Valery Syutkin, Mariam Merabova. He also performed with many foreign jazz musicians: drummer Peter Ivshin, who nowadays works with Alexey Chumakov; pianist Dmitriy Ilugdin, collaborating together with Varvara Vizbor; electric guitar player Leonid Berzovich, session musician. Well, and percussionist Arthur Gazarov, who used to work with Leonid Agutin.

Which studio are you working at?

At the beginning we hesitated over the choice of  "Mosfilm" or «MMS Records», but due to the incredibly creative atmosphere and rich technical equipment, chose the second studio. For the time being, we’ve recorded all the musicians, but the work is not over yet. The songs need to be mastered. We put this work off until our next trip in January.

What is more important to you: material well-being or the joy of creation?

Ideally, the ability to combine these components. I think that everyone should do what he likes, and not to waste time in the profession on  "trifles”. Undoubtedly, it is not easy and not always profitable. For making it profitable you should be famous. For being famous, in its turn, you need to invest into the business both materially and spiritually. It turns out to be a vicious circle: you must become popular in order to make music and not to think about finance. At the same time it is important to be happy and to make my family and friends happy as well.

How did you, the young musician, manage to "come in contact" with the professionals of such level and convince them to work together? Was that only the price of the question or they got interested in your music?

"The price of the question” has nothing to do with it. Before the musicians gave the green light, they had listened to all the musical material and then we talked. I told them about my vision of the final versions of the songs. The advantage for me was that the guys had heard of me as a guitar player and that Anton Gorbunov got interested in my project.

Could you tell us more about this? You were already familiar with Andrei Gorbunov, weren’t you?

Thanks to my guitar performance and strong interest in the guitarists of our time, I was familiar with many "cool" instrumentalists of our country. With Anton Gorbunov, or how I friendly call him "Uncle Anton," we gave several collaborative concerts of different musical genres. Gorbunov Anton is one of the best, maybe, even the best bass player in our country. Therefore, making the decision to record the songs, I had no doubt in choosing a bass player. In February of 2015 he invited me to take part and play in his solo concert, which was held in Kazan. At our meeting I showed him my songs, and Uncle Anton surprisingly "caught fire." Honestly, I was amazed at his reaction, knowing that he was a critical and decent in compliments. But that was precisely what made me believe in myself. Together with Gorbunov we decided to invite, in our opinion, the best musicians for this project.

Nikita, many people remember you as a fingerstyle guitar virtuoso [1]. What made you "switch" from instrumental music to the vocal one?

It is difficult to say exactly about the time of the turning point. When I wrote the first song, a couple of years ago − it was the impulse of the soul, I thought of my girlfriend and everything happened by itself. But I became so keen on that process, that I did not even notice how my concerts became more vocal rather than instrumental. I started composing songs in the style of funk, soul, pop music. Besides, it is difficult to remain interesting to the public and be on trend in Russia, if you are a guitarist, even being an unusual guitar player. Words and voice are very important for people. A good example for me was my close friend, the Brazilian musician Lukas Imbiriba. He had been a classical guitarist for a long time, but at the same time played great Brazilian music, funk, bossa nova. I was amazed, it became an incitement to my further work. For two years of work on a new project I’ve got the idea that this product may finally be released "to the masses."

Are you usually in charge of the songs recording process or it is the collective work?

Initially, I tell the musicians what I think about the song, the way I feel it and what I would like to hear from them. We try, think, discuss. I like brainstorms, when new ideas appear during rehearsals and the creation of arrangements.  This allows me to look at my music from the side. Nevertheless, the last word is still left to me.

What kind of relations are there in your team?

They are very friendly and warm. I’ve got a lot of useful pieces of advice and I’ve always felt "at ease" with them. We keep in touch and get ready for our further cooperation.

You’re telling with such enthusiasm ... Is this creative atmosphere so inspiring?

I am inspired by life itself. My beloved wife, parents, relatives, friends, great people give me inspiration. I would like to achieve success in this area not to be told about, but to contribute something of my own to the culture, society, world and  to be useful to people. Creative atmosphere adds new overtones to this.

And how was your acquaintance with the finalist of the show "The Voice - 2" Mariam Merabova?

I was introduced to Mariam by Uncle Anton. It happened when I was looking for a vocal teacher. Moreover, I needed a vocalist who would not “break” my style. Anton Gorbunov offered me to meet with Mariam and I am very grateful to him for that. Mariam is a wonderful musician and a very kind-hearted woman. We got on well with each other, became good friends and continue our cooperation.

Nikita, at first sight you seem to be arrogant.  Are you really such kind of a man or it is just a mask?

I am self-critical and at the same time fair to people. Sometimes there are situations in our life when you need to show your character. Especially when it deals with business. For example, there are often disagreements with the sound engineers, but I have to get a good sound for the successful performance. I think that in such situations people make the wrong opinion of me. But the profession requires it. If the criticism, addressed to me, is appropriate and constructive, I will heed it. Conversely, if people are interested in my opinion, I always express what I think, even if my words can hurt someone. At first, the interlocutors find it tactless, but later, when they know me better, start to appreciate this quality in me.

Nikita, tell us about three main qualities that may help to achieve success.

Firstly, a strong character and diligence; secondly, belief in yourself and in what you do; thirdly, talent.

[1]Fingerstyle guitar is the technique of playing the guitar by plucking the strings directly with the fingertips, fingernails, or picks attached to fingers, as opposed to flatpicking (picking individual notes with a single plectrum called a flatpick).

Keywords: The time when you can do everything