The results of the institute scientific research work in 2016 summarised 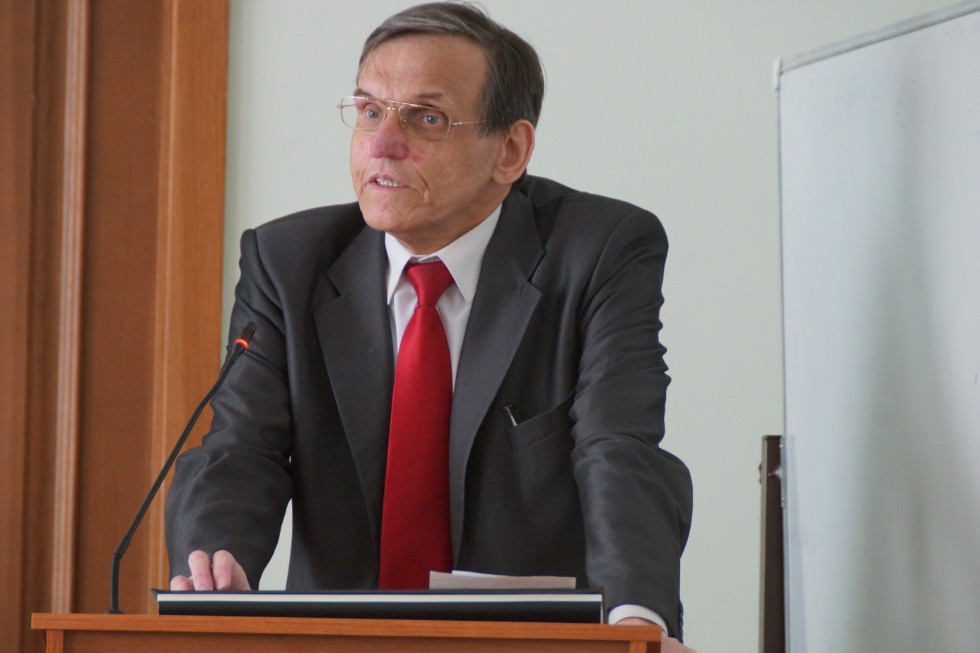 On the session of the scientific council of Leo Tolstoy Institute of Philology and Intercultural Communication that was held March 22, 2017 the results of the institute’s scientific research in 2016 and the perspectives of its further development were discussed.

The main report was made by the doctor of education, professor Iskander Engelevich Yarmakeev, who is an institute vice-director for research. In his report Leo Tolstoy Institute of Philology and Intercultural Communication main achevements were analysed in the field of scientific work in 2016 that let the institute to occupy the first place in the ranking of the main structure subdivisions of KFU socio-humanistic area.

While examining the question on publication of monographs’, international and worldwide conference collected  works, textbooks classified by Russian Federation Ministry of Education and Science, federal ERO and scientific and methodical councils, the articles and proceedings in the Russian editions, first of all, it was decided to increase the number of monographs, which are published abroad by the employees of the institute.

At the same time the emphasis was put on the increase of the conferences’ quality level, the engagement of the institute academic staff in the search and participation in the prestigious international conferences such as North East Linguistics Society (NELS) Conference, West Coast Conference on Formal Linguistics (WCCFL), American Council on Teaching Foreign Languages (ACTFL) Conference, The European Conference on Language Learning.

The high interest of the scientific council members was triggered by the results of the fund raising for the carrying out different scientific and scientific-educational projects particularly by means of the grants of Russian Humanities Scientific Fund, Russian Fund of Scientific Research, the Republic of Tatarstan Academy of Sciences, state assignement by Ministry of Education and Science of the Russian Federation, Federal special purose programme „Russian Language“ ,  state programmes of the Republic of Tatarstan, the programmes of Kazan Federal University competitiveness increase and so on. The members of the Scientific Council also acknowledged the necessity to level the contribution of the instistute higher schools and the departments into the overall financial scope obtained through the research and R&D accomplishement, through the search for new funding sources of the scientific research (grants, competitions and so on).

In the conclusion the question of the institute academic staff „breakthrough“ and „traditional“ topics of scientific research was discussed, the activity of Baudouin de Courtenay Research and Education Centre of Linguistics, Scientific research laboratories „Quantitative linguistics“ and „Clinical linguistics“ was analysed. The Scientific Council members presented a new significant scientific  project of Leo Tolstoy Institute of Philology and Intercultural Communication – „Cognitive and neurolinguistic technologies of education personalization and children rehabilitation“ that was brought forward to be examined by the Council on Competitiveness Enhancement of Leading Russian Universities among Global Research and Education Centers lead by the deputy Prime Minister of the Russian Federation Olga Golodets.

At the same time it was found necessary to review developed scientific research topics of the departments, higher schools and the institute in general from the point of view of KFU international competitiveness and also to strengthen the role of educational-scientific laboratories and temporary department scientific staff in the scientific research organisation.

The second question of the session was the election of Valiahmetova Alfiya Nikolaevna for the position of an associate professor of the department of Tatar and cultural studies and an associate professor Valiakhmetova Nelly Raisovna of the department of education technologies and information systems in philology. The secret ballot procedure resulted in both applicants getting general approval.

Keywords: The results of the institute scientific research work in 2016 summarised