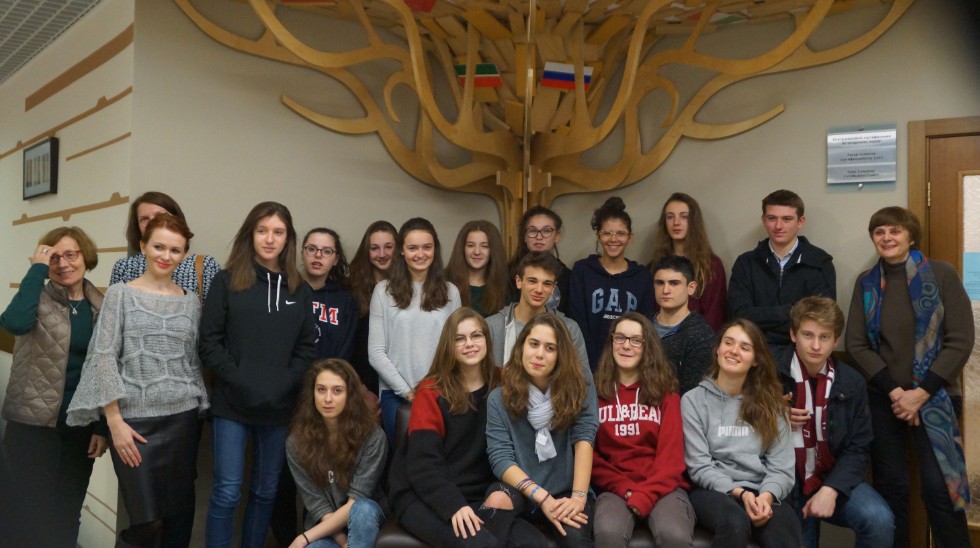 From April 15 to April 20, 2017, a group of schoolchildren from the French Lyceum named after Alexandre Dumas passed a short-time courses on the basis of the Kazan International Linguistic Center and the Higher School of Russian Language and Intercultural Communication (KFU).

The program included daily classes in Russian language, a variety of cultural and entertainment activities. On the first day after arrival, the schoolchildren and their curators were able to visit the Musa Jalil’s Opera and Ballet Theater, where they had got acquainted with one of the most popular heroes of the Tatar epic – Shurale. However, the touching legend of Queen Syuyumbike, which they heard while walking along the Kazan Kremlin – the main tourists attraction of the capital of Tatarstan – became more to the liking of the French youths.

The trip was not limited to sightseeing tours around Kazan, the guests of the capital managed to go to the island-hail Sviyazhsk, where they got acquainted with its unusual history and enjoyed the greatness of the creations of the Pskov architects. Especially the children were impressed by the harmonious unification of two cultures – European and Asian (Tatar and Russian), the universal neighborhood of the monuments of the two religions (Islam and Christianity).

One day schoolchildren from Moscow visited the Old-Tatar settlement, where they particularly liked the Chak-chak Museum: they were able to keep warm (all days the weather was not welcome-tourist-type) and enjoy the taste of the main Tatar dessert.

The guests noted the unique architecture of Kazan, hospitality of its residents, their original fashionable style. They had an opportunity to understand the peculiarities of the mentality of the Kazan youth, their way of life – they had a meeting with students of the Institute of Philology and Intercultural Communication, who study French language.

All this time the teachers of Russian as a foreign language department helped the French to cope with language difficulties and understanding of cultural and linguistic features of Russian-Tatar culture.

During the final conference, the students shared their impressions of the visit to Kazan, noted the interesting format of the language school program and unanimously concluded that it would be nice to return to Kazan in summer. In the end, French schoolchildren were awarded certificates of passing Russian language courses.