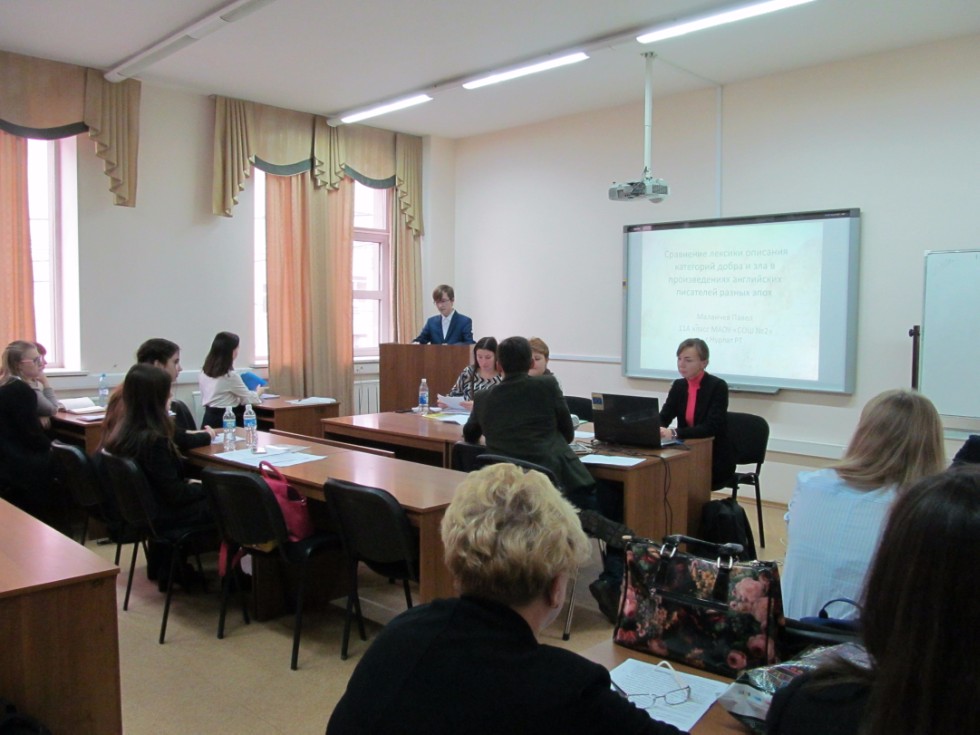 November 2, 2017 at the Institute of Philology and Intercultural Communication named after  Leo Tolstoy, within the framework of the All-Russian scientific conference-competition of students named after Leo Tolstoy, a meeting of the section "Lexis and phraseology of the English language in synchrony and diachrony" in the focus area “Germanic and Romance languages ​​in the modern world” was held. Twelve participants, schoolchildren of 8,9,10,11 classes of schools and gymnasiums of Kazan, Nurlat, Orenburg, Ulyanovsk took part in the work of the section. The reports were devoted to the results of independent studies, which were carried out in the field of comparative linguistics. Subjects of the reports were diverse: limericks, sequins, neologisms, Anglicisms, English phraseology, American and British variants of English and other topics. The students demonstrated the knowledge of languages, the basics of linguistics and phraseology. After the reports, the speakers were asked questions which revealed the essence of the research and motivated schoolchildren to continue their scientific activities. The Section was headed by Doctor of  Philology Kayumova D.F., with the experts Guryanov I.O., Safiullina G.R. The schoolchildren were invited to further active participation in the All-Russian scientific conference-competition of students named after Leo Tolstoy.

Keywords: Lexis and phraseology of the English language in synchrony and diachrony

Ôîňîăđŕôč˙ čç ěŕňĺđčŕëŕ: "Lexis and phraseology of the English language in synchrony and diachrony" in the framework of All-Russian scientific conference-competition of schoolchildren named after Leo Tolstoy