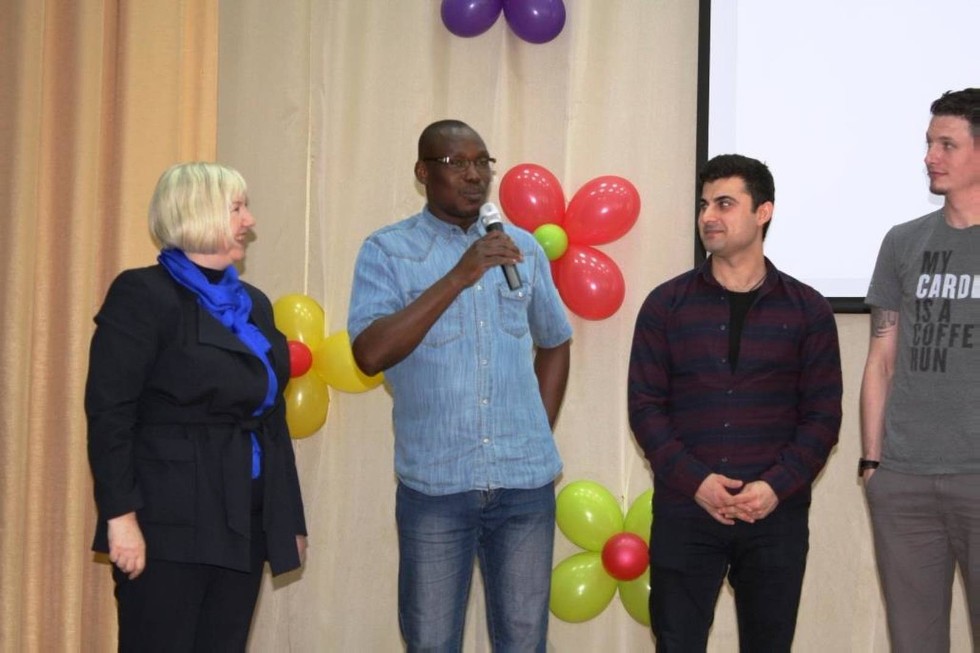 Mother tongue day has been celebrated all over the world every year on February, 21 since 2000.  The main goal of this holiday is protecting the linguistic and cultural diversity of the world. The higher school of the Russian language and intercultural communication  has got a good tradition to go to gymnasium ą1 of the Rich Saby village this day. This year the international student landing of Leo Tolstoy Institute of Philology and Intercultural Communication was welcomed with a special scope: a real surprise was awaiting foreign students on the school threshold already – a Tatar melody performed by school accordionists and the traditional bread and salt. More than 100 schoolchildren of the first - tenth classes, and teachers gathered in the assembly hall of the school. At first foreign students, who greeted the villagers in their native languages, came to the stage, and schoolchildren enthusiastically guessed which countries the guys came from and what languages ​​they spoke. It should be noted that the kaleidoscope of languages ​​was very diverse: the greetings sounded in English, Arabic, Chinese, Korean, German, Persian, Turkish, French and Japanese. Of course, the most exotic language, which no one in the hall could recognize, was Bambara - the mother tongue of a master student from Mali. Then a video about Institute of Philology and Intercultural Communication (IFIK) was shown.

The most interesting event expected the schoolchildren in the second part of the holiday, when eight language platforms were opened. Each platform worked according to its scenario, with teachers being its guests, and presentations and master classes being conducted by students. That day ancient Korean and modern French songs sounded at school, schoolchildren mastered the basics of Chinese calligraphy and cut out hieroglyphs from paper under the guidance of their new friends, played national games, mastered the secrets of eating with chopsticks. Students also showed presentations about their countries, capitals, dishes of national cuisine.

And after master classes a new surprise from gymnasium schoolchildren occurred. They decided to acquaint foreign students with the Tartar Sabantuy traditions. A real celebration unfolded in the school gym – with dances, traditional live games, in which foreign guests took the most active part. The holiday of languages ​​and cultures ended in the schoolyard with the joint quadrille of students and schoolchildren and the Russian Shrovetide games.

There was not a person feeling bored at any platform that day! The main result of the international landing is joy of the children’s genuine interest in the world languages ​​and cultures, that foreign students presented that day, and pleasure of "different peoples’ children" sincere communication.

The event was organized and carried out by the department of the Russian language as foreign, the contrastive linguistics department, the language and intercultural communication department. See photos: